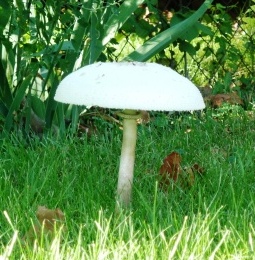 Today's image is courtesy of our neighbor down the street, who had three of these enormous mushrooms growing in her yard. The scale may be hard to judge, but this one was easily 6-8 inches tall, and the cap was bigger than the spread of my hand from pinkie to thumb (i.e. the size of a small dinner plate)! These invaders were probably occasioned by our recent wet weather, but they are gone today, as the weather was so nice this weekend that everyone was out doing yard work. I've paired the image with a classic poem about a rain-related technology that seemed to fit the situation.


Under a toadstool crept a wee Elf,
Out of the rain to shelter himself.

Under the toadstool, sound asleep,
Sat a big Dormouse all in a heap.

Trembled the wee Elf, frightened and yet
Fearing to fly away lest he get wet.

To the next shelter—maybe a mile!
Sudden the wee Elf smiled a wee smile.

Tugged till the toadstool toppled in two.
Holding it over him, gaily he flew.

Soon he was safe home, dry as could be.
Soon woke the Dormouse—"Good gracious me!

"Where is my toadstool?" loud he lamented.
—And that's how umbrellas first were invented.
Posted by Kristen Ann Ehrenberger at 9:03 PM No comments:

Me: I don't love you for your ability to throw a frisbee.
Him: Clearly.

I've been thinking a lot about love and marriage over the past month or so. If you've read any of my recent posts, you know that Dear Husband and I just celebrated our 7th wedding anniversary. Having reached that magic (hexed?) number, we've gotten a lot of jibes about itching and straying. We've all seen the movie, right? All I have to say to that is that the last time we reached the seven-year mark...we got hitched. We no longer qualify as newlyweds, moony and head-over-heels in love, but thanks to my educational program changing every year, we haven't gotten into any kind of routine that could be shaken up by scratching an itch. Instead, the fact that the other is there (wherever "there" happens to be that year) has been the constant that has driven us closer together. We are comfortable with each other but not yet bored. For instance, today I learned that DH didn't know how to throw a frisbee.

I've been giving love and marriage extra thought recently, because the last thing I read before we headed out the door for our anniversary trip to Madison was that a friend's marriage is breaking up. One of them is moving out, they're trying to figure out custody of their child, their car, their house. The one said, I don't know who this person is anymore, but I still love him.

It got me to thinking about how much emphasis our culture puts on "love" in marriage. The ideal is a couple falls madly in love with each other, stages a fairy-tale wedding, and lives happily ever after. The problem is that "happily ever after" lasts a lot longer than wooing and marrying does. Then come the dirty dishes, the dirty socks, the dirty bathroom, the dirty car, the mowing and raking, trips to the vet, deadlines at work, classes at school, committees at church, and oh yeah, and try to have some couple time, too. Heaven forbid the couple have any problems with sex or disagreements about raising the children, the two things that most obviously bring them together. I don't think "love" as we usually define it can sustain a marriage through all of that; I think it takes a kind of commitment that our culture does not acknowledge or support enough.

(For instance, we recently attended a family wedding, and the pastor mentioned many times the couples' love for each other. That's great, but it seemed somewhat cliched. At a wedding you have a captive audience! Then is the time to remind everyone about the hard work it takes to sustain a committed relationship through job changes, various phases of life, losses of loved ones, decisions to move, and especially the busyness that is everyday life.)

I don't know why my friend's marriage didn't make it and don't presume to judge their situation. I have to believe they know what is best for themselves. But I mourned their loss in the car as we were driving up to Madison. As someone who believes in the institutions of marriage (civil and religious), I take marriage vows seriously, and when friends or family feel they can no longer honor the things they promised when they were still so much in love, it does make me sad. Divorce should obviously be allowed, but surely not every marriage that ends that way needs to.

I mentioned my concerns about the relative weight placed on love versus commitment to DH. He told me that he had come to a realization early in our relationship.  He found that when we had a conflict, if he sought to resolve the conflict first, no matter how he felt about me beforehand, afterward he loved me more. It was a question of choosing to act first rather than waiting to feel good ("in love") and then acting on it. I was moved, especially considering how often a hot-head like me can push someone's buttons. For a moment, it was the most intimate we could be going 65 miles an hour along an interstate highway.
Posted by Kristen Ann Ehrenberger at 6:21 PM 3 comments:

Email ThisBlogThis!Share to TwitterShare to FacebookShare to Pinterest
Labels: marriage, relationships
Newer Posts Older Posts Home
Subscribe to: Posts (Atom)
The blog title names my three main roles and goals in life: as a woman/wife (Frau), as a PhD in German history (Doktor), and as a future complex care specialist (Doctor). I write these posts to amuse myself. If they amuse you, too, please leave a comment!