This week Dear Husband and I are trying out two new casserole recipes from the Better Homes & Gardens One Dish cookbook My Awesome Parents got me one Christmas. (My paternal unit inscribed it "You're surprising!" because he hadn't though I possessed the interest and attention-span for cooking.) DH and I have found and adapted a number of tasty dishes from it over the years. Yesterday I made a delicious concoction of pasta, sausage, spinach, and cheese, and I'll get around to posting it eventually. But the one DH prepared for tonight was so surprisingly good that I resolved to put it up immediately for your edification and delight.

1 lb. small red or yellow potatoes, thinly sliced -- We can get these at our farmers market.
10 3/4 oz. can condensed cream of potato soup
15 oz. can garbanzo beans -- Also known as chickpeas; not the same thing as Great Northern white beans.
15 oz. can small red beans
1 cup frozen peas -- If I had been cooking, I would have put in at least 2 cups.
2 stalks chopped celery -- I left this off because DH doesn't like it.
1 cup chopped green bell pepper -- I left this off because I think it's wasted when it's cooked.
1 cup onion, chopped -- I would have chopped the whole dang onion, but DH measured carefully because it's not his favorite thing.
1/4 cup skim milk
1/2 cup shredded Monterey Jack cheese -- I omitted this because yesterday's casserole also had cheese.

Seasonings: 4 cloves minced garlic, 1/2 tsp cumin, 1/2 tsp. coriander, 1/4 tsp. cracked black pepper -- The cumin and coriander were courtesy of my grandmother, who brought us back a small spice rack from Turkey. I also like to add 1/2 tsp powdered sage.

2. Cook potatoes for 4-5 minutes in just enough boiling water to cover them. Drain and set aside, or just leave them in the pot until you're ready for them. (This reduces baking time.)

3. Meanwhile, heat some oil in a saute pan. Add garlic and onion. The recipe said to cook 5 minutes or until tender--but again, leaving the heat on will reduce baking time.

4. Mash 1/2 cup of garbanzo beans. Add mash, all the beans, peas, soup, milk, cumin, coriander, and sage to the vegetables in the pan. Mix carefully.

5. When she emerges from her study, let wife talk you into using a 2-qt casserole dish instead of a pie plate, since both baking dishes are still full of yesterday's casserole. Try to remember to grease the dish. Line with potato slices. Spoon the bean mixture on top. Cover with potato slices.

6. The instructions say to bake, covered, for 45 minutes, but at that rate it wasn't going to be done in time for DH to eat before rehearsal. Since DH had not rinsed the potatoes with cold water and everything seemed to be mostly cooked already, we just popped it in the oven for 15 minutes to heat through. (If using cheese, sprinkle on top for the last 5-10 minutes, uncovered.)

I can't tell you enough how good this tasted. In fact, the rainbow chard I fixed as a side dish with butter, onion, tomato, and salt was a complete let-down. Next time I'll add more salt, or maybe some lemon juice. If you prepare this dish, I'd be interested to know what alterations you made and what you served it with!
Posted by Kristen Ann Ehrenberger at 11:39 PM No comments:

The Land of Lincoln 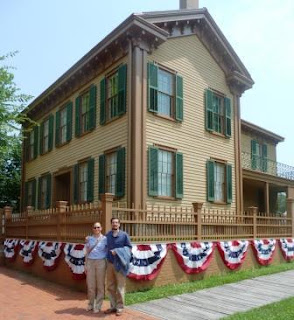 Dear Husband and I recently accompanied his parents on a day trip to Springfield, Illinois, for all things Lincoln. One thing I learned was that Springfield is the third capital of the state: the first, Kaskasia (18909-1818), was abandoned because of constant threats of flooding from the Mississippi River. From 1819 to 1839, the specially founded town of Vandalia hosted the state government (including a young Abe Lincoln). Springfield finally got the job as a large, centrally located city due in no small part to the advocacy of Lincoln, among others. (Wikipedia tells me that the town was originally named Calhoun for the South Carolinian politician, until his popularity with the public dived and the locals renamed the place for the Silicon Valley of the early 19th century: the textile manufacturing town of Springfield, Massachusetts.) In 1844 the Lincolns purchased this house in a new "suburb" of the growing municipality.


The 16th President of the United States of America spent the happiest 17 years of his life in Springfield. He and Mary Todd Lincoln lived most of that time in this two-story house, which they had bought from the minister who married them and expanded twice: once to add a back parlor on the ground floor and once to raise the attic roof to make a proper second floor with five bedrooms. 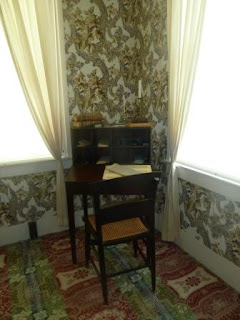 Our tour guide was fond of reminding us that the Lincolns had sold all their furniture and household goods when they moved into the White House. A railroad bigwig bought the house and some of the furnishings, which returned to Chicago with him in 1869 and disappeared in the Great Fire of 1871. The rest of the pieces had been bought by friends and neighbors and came back to the house once it became a historic site. So Abraham Lincoln actually used the desk and chair in the photo (right).

The wall paper is a busy French blue design Mary picked out. I was a big fan of the woven floor covering until I asked the the tour guide how they kept it clean (being familiar with both rug beating and the anachronicity of vacuum cleaners). It  turns out that every spring they had to move the furniture, pull up the carpet tacks along the walls, cut or rip the stitches holding the pieces of cloth together, beat each piece outside over a line, and then roll them up for storage over the summer. In the fall, these were pulled out, unrolled, re-sewn, and re-tacked. Definitely a luxury only the family of a lawyer and legislator could afford!

Robert Todd Lincoln sold the house to the state of Illinois in 1887 for $1 and the promise that they keep it up and admit visitors for free. This they tried to do will into the 20th century, when it all just became too much. There was too much development around the home: a Piggly-Wiggly across the street, souvenir shops in people's living rooms, and a proposed motel on the next corner. So the National Park Service stepped in, bought up the properties on four blocks, and turned the neighborhood into a pedestrian zone. A few of the houses are used for museum purposes and the rest as Park offices. 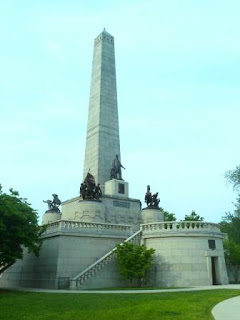 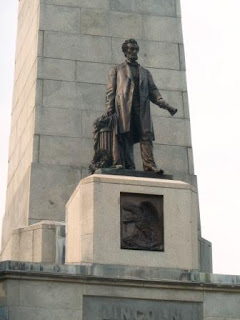 We also visited the Abraham Lincoln Museum, where we saw both the regular exhibits and a special display on Civil War weapons and medicine. We had just enough time to stop by the Lincoln Tomb. It was closed, so we couldn't go inside, but we could rub Abe's nose for good luck! 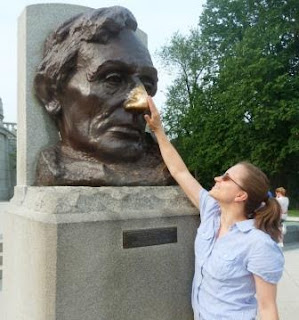 Posted by Kristen Ann Ehrenberger at 7:54 AM No comments:

If the Ponyshoe Fits... 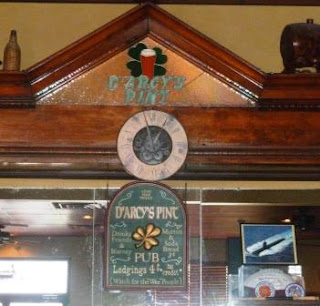 Growing up I was a kind of picky eater. As I recall, items on my Do-Not-Eat List ranged from tomatoes and mushrooms to bananas and kiwis. I believe raisins and pears made brief appearances, as well as anything considered "hot" (like salsa) or "spicy" (like my dad's chili). Interestingly, brussels sprouts and lima beans never made the list. Once in college, however, I discovered Indian food. More specifically, lamb saagwala (spicy spinach): yum. Since then, I have gotten even more "adventurous," branching out into heretofore-unknown vegetables, as I have chronicled on these pages before (turnips? kohlrabi? kale?!). Being something of a food historian now, I try to keep an open mind. I figure I can try almost anything once. On a road trip with my in-laws recently, I had the opportunity to put this philosophy to the test with a dish original to Springfield, IL: the horseshoe.

A horseshoe is an open-faced sandwich composed of Texas toast, meat, french fries, and cheese sauce. Sounds like a heart attack waiting to happen, doesn't it?

It's a midwestern spin on Irish bar food, now served in Central Illinois diners and greasy spoons to the delight of carnivorous customers, who compare cheese sauces and meat selections in their online reviews. Because my arteries had started to harden already while locals described it to me after a church meeting, I resolved to order the horseshoe's smaller cousin--a ponyshoe--and split it with Dear Husband. (Our waitress said the horseshoe comes with an extra handful of fries and an extra scoop of sauce.)

We opted for the corned beef and put the cheese sauce on the side (otherwise the fries get soggy). Also a large house salad to share (otherwise my healthy-eating conscience would wilt). DH was decidedly skeptical about the whole business, until I was able to coax him to try the cheese sauce. He pronounced this "pretty gouda" and proceeded to dunk his fries alternatingly in ketchup and cheese sauce. It really was delicious, but of course we didn't use even half of the cup that was provided. Maybe our arteries will last a little bit longer for it!

All in all, I found the horse/ponyshoe to be a delicious dish that--with the addition of a salad--makes a passing "sometime" meal to share on a special occasion.
Posted by Kristen Ann Ehrenberger at 8:00 AM No comments:

Email ThisBlogThis!Share to TwitterShare to FacebookShare to Pinterest
Labels: food, travel
Newer Posts Older Posts Home
Subscribe to: Posts (Atom)
The blog title names my three main roles and goals in life: as a woman/wife (Frau), as a PhD in German history (Doktor), and as a future complex care specialist (Doctor). I write these posts to amuse myself. If they amuse you, too, please leave a comment!