That's So Pittsburgh: Summer Fridays at the Frick 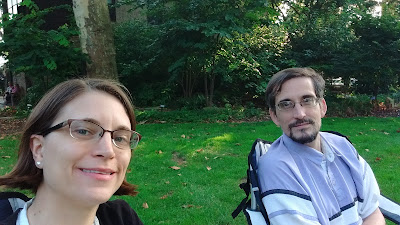 Third time's a charm: we finally made it to Summer Fridays at the Frick. The first time we tried to go, it started raining as soon as we walked out of the house. The second time I wanted to hear a friend play with his band, but I had worked a night shift and ended up sleeping the day and evening away. This was probably our last chance to attend, so we packed up some wine, pizzelles from the Bloomfield Little Italy Days, and our old lawn chairs that suffered more from the mice in our old garage than we ever used them and walked over to the Frick mansion. We passed up the food trucks selling burgers, pizza, tacos, and ice cream and set up on the edge of the big lawn, where families and couples were picnicking. Although the band was set up on the adjacent lawn, they were loud enough to hear but not so loud that we couldn't think or talk. I found it mete that the performers were a rock band called The Optimists. If we had not gotten cold--the temperature was only 70 when the sun was up--we might have visited the Frick Art Museum, which has a new exhibit since the time we visit in the spring.
Posted by Kristen Ann Ehrenberger at 6:48 PM No comments:

What Residency Looks Like II: Better Train Your Dragon! 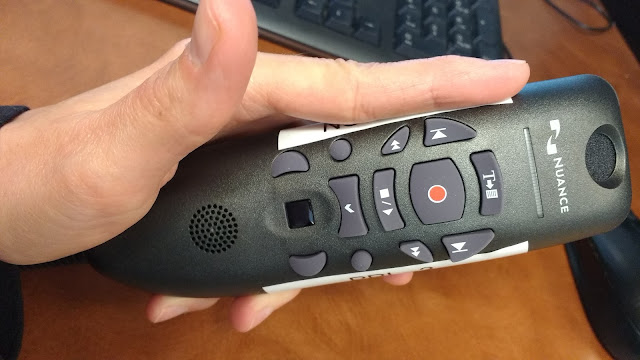 This is my dragon, a special (=expensive) dictation mic that helps me prepare notes more quickly than typing. Except when it's misbehaving, which can be frequently, and then notes take longer because you have to laboriously fix the typos (speakos?) instead of just fluently typing a note (with abbreviations and half sentences). No joke, they have you sign up for a class to train your dragon by reading pre-set texts so that it understands your inflection and pronunciation.

Newer
Posted by Kristen Ann Ehrenberger at 6:40 PM No comments: 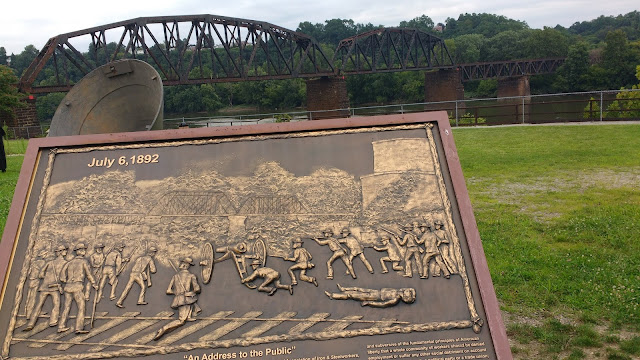 On Thursday night this week, after I got off of work and we had dinner at home, Dear Husband and I drove to the historic Pump House on the Waterfront in the south of Pittsburgh, where we joined the Battle of Homestead Foundation to watch an old black-and-white movie and talk about the class and steel industry in Pittsburgh. The Battle of Homestead was an actual shootout between members of a labor union and some Pinkerton's men on the Monongahela River on July 6, 1892. It was one of many violent clashes during the period before labor unions were legalized and recognized as a legitimate form of organization. Three unionists and seven anti unionists were dead at the end of the day. That strike at Henry Clay Frick's factory was unfortunately eventually broken. The BHF was founded to foster the history of Pittsburgh's working classes and industrial mills. The movie we watched was The Valley of Decision, which was originally the number two best-selling fiction book in the United States in the year 1942. It stars a very young and handsome Gregory Peck and a darling Greer Garson. Unfortunately the Irish accents were thick and neither the movie sound nor the speakers were very good, so it was a little bit like watching a silent film, as neither of us understood more than 50% of what was said. But we generally got the gist of what was going on: the spunky daughter of a mill worker crippled by an accident goes to work as a maid in the home of the mill owner. Of course she falls in love with the dashing oldest son, but can their relationship survive the class war of late-19th century Pittsburgh? Before the movie, a couple of labor history and movie aficionados spoke briefly about the organization, the book by Marcia Davenport, and the movie, which was once described in a newspaper review as "the Gone With the Wind of Pittsburgh." There was supposed to be a discussion afterwards too, and we were easily the two youngest people in the room of 30-40, but it was 9:30 at that point, and I needed to get home to go to bed for a day of work in the morning. Nevertheless, the movie was well acted, and free, so it was a nice date night.

Happy 12th Anniversary: It's not all roses 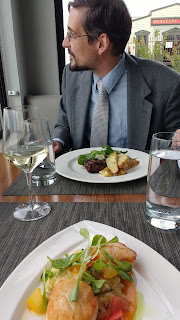 I took Dear Husband to Altius for our 12th wedding anniversary. The evening did not start out well. I had just gotten up from a nap after my first 24-hour shift and hastily gotten dressed in the new frock DH had bought me for my birthday, but once in the car and running 10 minutes late, I discovered I had neglected to put on a slip and decided I didn't like the jewelry ​I had picked out (remembered the silk shawl, forgot my pearls [traditional 12th anniversary gifts]). We pulled up for valet parking, and as I stepped into the restaurant, I broke a heel in front of everyone. After we ordered, DH decided to give me his anniversary card early, because of the message: it not all been roses, but we've walked the path together. We opened our other cards and decorated the windowsill with them, just like we did in his hospital rooms.

In our corner seat, we had an excellent view of the Three Rivers Regatta and the speed boat finals happening at the Point. That's what DH is paying attention to instead of his steak. (Isn't he handsome?) Behind him you can see the observation deck for the Duquesne Incline, from which the shorts-clad sightseers were watching us as well as the race. 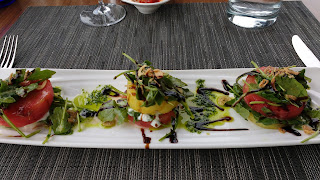 The food was fancy: watermelon salad (above) and scallops for me, steak for the Mister. Our meal also came with two amuse bouches, unlimited bread with spreads, and two little dessert bites to take home with us. Like most fine restaurants, when we didn't have room to order a full dessert, they offered us a small complimentary​ one. The price is high enough that we will only eat dinner here for special occasions, but maybe we'll come back sooner to try their deconstructed desserts. 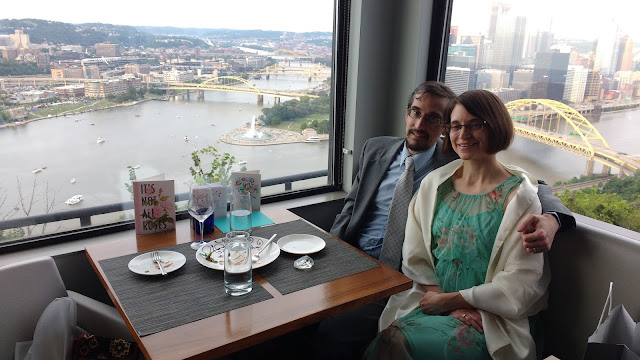 Over dinner, we tried to remember all the places we've gone to celebrate our anniversaries: Chicago, St. Louis/Kansas City, Indianapolis, Milwaukee, Cincinnati, Madison, San Francisco, Metropolis, and (over the coming Labor Day Weekend) Columbus. On occasion life has been too hectic for us to get out of town, but we do always try to dress up and eat good food in honor of another year as husband and wife. For instance, last year we celebrated our eleventh/steel anniversary at the Steel City restaurant named Eleven. Because, how could we not?
Posted by Kristen Ann Ehrenberger at 11:32 PM No comments:

Email ThisBlogThis!Share to TwitterShare to FacebookShare to Pinterest
Labels: food, landscape, marriage, relationships, TSPGH
Newer Posts Older Posts Home
Subscribe to: Posts (Atom)
The blog title names my three main roles and goals in life: as a woman/wife (Frau), as a PhD in German history (Doktor), and as a future complex care specialist (Doctor). I write these posts to amuse myself. If they amuse you, too, please leave a comment!