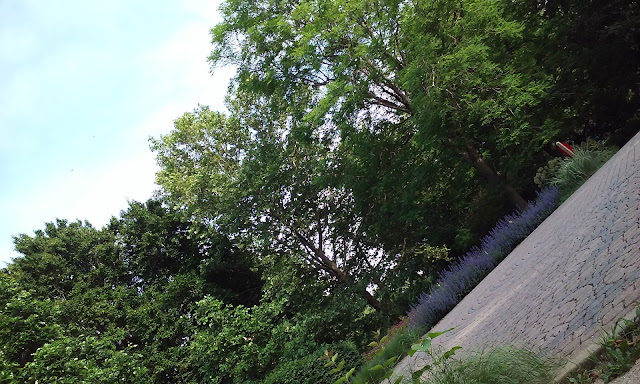 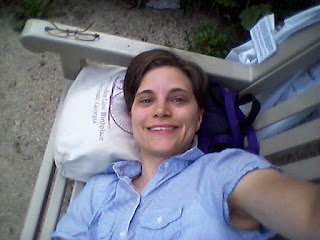 When my senior resident dismissed me at 5 o'clock this evening (pleasant surprise!), I decided to take advantage of the lovely weather by unwinding at the park next to the hospital. After facebooking for a while, I lay back on the bench and completed my daily 10-question quiz while butterflies chased each other around me. Above is the view of the walking labyrinth, which is bordered by mint and butterfly bushes. A literal and spiritual breath of fresh air like this makes the surgery rotation bearable, despite having to get up at 4am, stand on my feet for hours, and rearrange meals.

Newer
Posted by Kristen Ann Ehrenberger at 8:55 PM No comments:

Children's Sermon: Pentecost as a Reversal of Babel 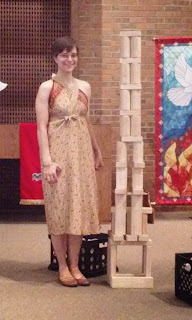 Unsurprisingly, one of the biggest challenges of writing children's sermons is figuring out how to translate Biblical texts for small children. After all, the Bible is a mishmash of genres (myth, poetry, political history, parable, hagiography) written for adults inhabiting historical and cultural contexts far removed from the 21st century. One favorite tactic is to use metaphors: "God is like..." or "The Kingdom is like..." Jesus employed metaphors all the time! But psychologists tell us that such abstract thinking doesn't develop until the teenage years. Another common tactic is simply to tell stories; the Older Testament and the Synoptic Gospels in particular lend themselves to this. However, what to do when a more complicated passage is the preaching text? How to teach our children better moral lessons for living? (Preferably ones bigger than "be nice" and "obey your parents," although I have fallen back on these at times.) I am also aware that the congregation is my audience as much as the kids who come to the front of the sanctuary.

Then there is the problem of props. I find that even five minutes of pure talk for a children's message is not riveting enough for most kids (especially the young ones who still come down the aisle for them). Having a prop of some kind at least catches their visual attention, and you hope that their mental attention follows! However, it is also entirely possible that they will become so engrossed in the prop that they do not hear what you're saying.

With these monthly conundrums in mind, I tackled the Scripture for Pentecost (Acts 2). Seeing it with fresh eyes and ears this year, I was struck by the list of "God-fearing Jews from every nation under heaven" who had gathered in Jerusalem for Shavu'ot (the Feast of Weeks, to celebrate both the first fruits and the giving of the Torah). Somewhere or other I had read that Pentecost can be seen as a reversal of the Tower of Babel myth in Genesis. Building a tower with blocks would give us something to do while talking about God's relationship to all nations, so I decided to run with it. Here, more or less, is the children's message I delivered this Pentecost Sunday.

Good morning! I'm so glad you came up front this morning, because I need your help with these blocks. Can you help me build a tower? Let's see how high we can make it!

Do you know the story of the Tower of Babel? It's a myth in the Older Testament of the Bible. Long, long ago, in a land far, far away, the people wanted to be closer to God. This was back when everyone spoke the same language. So they got together and decided to build a tower allll the way up to heaven. However, God knew this wouldn't work, so the Bible tells us that God "confused" their languages. They couldn't talk to each other anymore, so they had to give up on the tower. 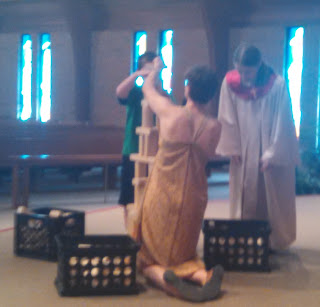 However, the people and God still wanted to have a relationship with each other. So the Newer Testament of the Bible tells us that God sent Jesus. He lived, and taught, was crucified, died, and buried, and then he rose from the dead. After he was gone, the Holy Spirit came to inspire the disciples to share the Good News to people from all the different countries in the world. Even though they all still spoke different languages, now they could understand that God loves them and that they should work together to build the Kingdom of God on earth.

Thank you for your help today. You know the point wasn't to build a tower out of blocks, right? It was to build the Kingdom of God for everyone. Let's pray about it: Dear God, thank you for the Holy Spirit. Help us to build your Kingdom. In Jesus' name, AMEN.


We left the tower standing in the chancel for the rest of the service as a reminder to the congregation of Pentecost as a reversal of Babel.


Editor's Note: some of my other children's sermons are on the Transfiguration and Holy Week.
Posted by Kristen Ann Ehrenberger at 9:22 PM No comments:

Email ThisBlogThis!Share to TwitterShare to FacebookShare to Pinterest
Labels: architecture, church, language, religion
Newer Posts Older Posts Home
Subscribe to: Posts (Atom)
The blog title names my three main roles and goals in life: as a woman/wife (Frau), as a PhD in German history (Doktor), and as a future complex care specialist (Doctor). I write these posts to amuse myself. If they amuse you, too, please leave a comment!