That's So Pittsburgh: Music to my ears 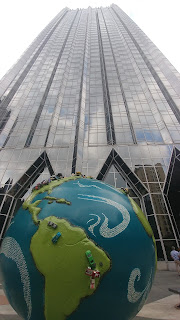 Today is a rare day off in my residency schedule, so we had planned to meet up with friends of ours from out of town for lunch and a visit to the Carnegie Science Center. However, they had had an over full day the day before and were not ready to leave Hershey until after lunchime. Luckily, a friend of Dear Husband's texted at the last minute, inviting us to hang out with her and her wife at a local watering hole, Friendship Perk and Brews. From there we carpooled into downtown for the Piano Day Pittsburgh open-air music festival. Organizers had placed four pianos around the Cultural and Arts District. Local musicians volunteered to be scheduled to play at three of them, and one was reserved for the public to showcase their talents. We started there, at PPG Place, where Dear Husband accompanied while the friend sang a couple of pieces from their concert the previous night. 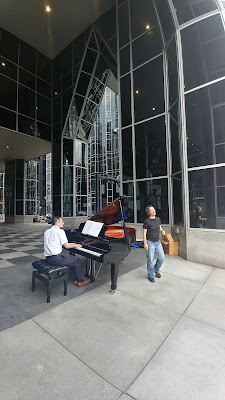 Next we bypassed the singer-songwriter set up in Market Square and headed to the classical music station at Heinz Hall, where we watched a succession of tykes play on a Steinway as if at a recital. We ended up at the jazz station, where we took up residence on a shady bench in front of a fountain to chat and enjoy the music. Along the way we bumped into some familiar faces, one of whom asked whether I had been working very much and whether we getting to spend any time together. "Yes," I answered, because despite my crazy schedule we have managed to find time for dinner, or walks. Or even just some silly texting during a slow moment. 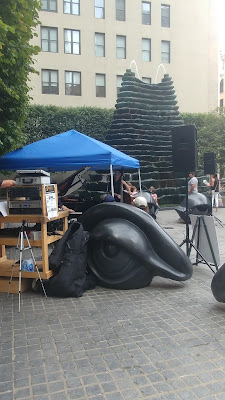 Then we perambulated across the Roberto Clemente Bridge and along the River Front Walk, where I pointed out the trees we had planted a year ago, Gandalf, Galadriel, and Waldo. We had enough time for me to visit the Fred Rogers Memorial overlooking the river confluence across from the Point, where the fountain was gushing in its full glory. We sat in the shade to listen to the recording of Rogers singing songs and reading stories before finally heading to the Jerome Bettis Grille for a leisurely 2-hour dinner and conversation. As we walked back across the river to our car, we enjoyed the lights and a gentle breeze after the heat of the day.

Posted by Kristen Ann Ehrenberger at 9:15 PM No comments: 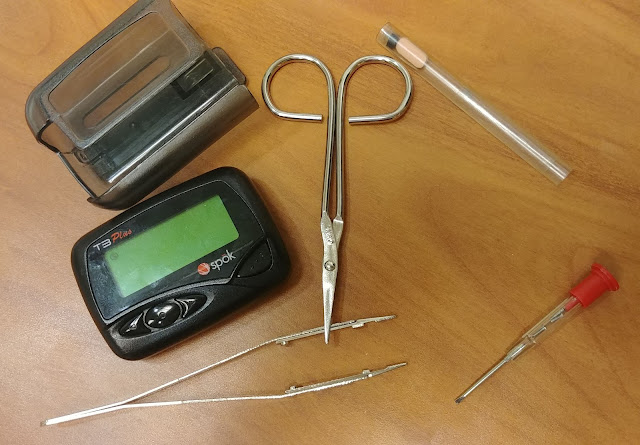 While working at the hospital over the weekend, my pager fell out of its holder onto the floor--again. The loose screw popped out, and the corner button got stuck in the "on" position (a compression fracture?). Despite performing emergency surgery on it with a suture removal kit and an eyeglasses repair kit, I had to declare its condition terminal. Today I made the long trek to the pager office and exchanged it for a new one--good thing we don't do that when our loved ones get sick!

Newer
Posted by Kristen Ann Ehrenberger at 8:15 PM No comments:

I'm a pretty passive reader. Even when reading for research, it takes more mental energy to engage critically with the author's ideas than to simply let them wash over me until I turn the last page. Margaret Atwood's The Handmaid's Tale (1985) is different. Not only did it transform me back into the kind of bookworm I was as a kid--reading while walking, getting dressed, or brushing my teeth--but it also inspired me to lie in bed on my one day off in seven, just thinking about it. Atwood herself observed once that The Handmaid's Tale has "haunted" her in the thirty years since the book was published, although at the time it was an intensely productive but not self-reflective period. Funnily enough, it was the historian's talk at the end that really got my juices flowing. The result is a blog review a whole four months in advance of my annual Books I Read This Year list.

Although I had loved Atwood's short story "Bluebeard's Egg" as an undergraduate, I had gotten all the way through college AND graduate school without reading The Handmaid's Tale in either a feminist studies class or on my own. I really only knew the premise from the promos around the current Hulu series (now confirmed for a third season), of a dystopian future in which a violent theocracy uses women as reproductive vessels. I was enthralled with this book from the first few pages. I was struck initially by two things: 1) the narrating character's word play, which I assume came from Atwood herself and which is so prominent throughout the book that I can't pull out a single favorite passage, and 2) the way that the reader's view is blinkered, the environment and context revealed piecemeal, much like the main character's point of view is physically limited by her headdress and practically limited by the regime's control of (mis)information. Fragmentation comes up repeatedly in the story, from the flashbacks set between action "in the present" to the body parts mailed to defectors to the bits of recording scattered among dozens of cassette tapes.

I found the characters nuanced but not entirely knowable, which fits the setting in an oppressive society wrought with spies (::cough:: DDR, USSR), as well the style of writing with a narrator who is not omniscient. I particularly appreciated that Atwood had Offred tell Moira's story in Moira's voice, letting this female figure speak as herself in a culture that sought to silence women. Finally, I thought about the passage of time. The table of contents contains seven "Nights," suggesting one week--of creation? By the narrator's description, the events in the present tense take place from early spring to late summer of one year. It was harder to tell how many years had elapsed since the Sons of Judah had taken over the country--perhaps three? And of course Offred's memories stretch back to her childhood in what sounded like the mid- to late twentieth century. Atwood's critiques of American culture and politics made me wonder what it would be like to read this book alongside Rachel Carson's Silent Spring, for its expose of physical and chemical danger to the environment.
Posted by Kristen Ann Ehrenberger at 4:30 PM No comments: 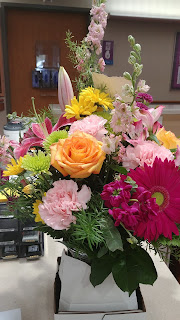 Sometimes residency looks like patients' gratitude. This last week was long and emotionally fraught, but it was made a little lighter by the patient who sent everyone baked goods, and by the family who was so appreciative that they dropped off this lovely bouquet. Other things patients have given me: fresh pizza, hugs, and a leather tag for a keychain he had stamped "KRISTINE." 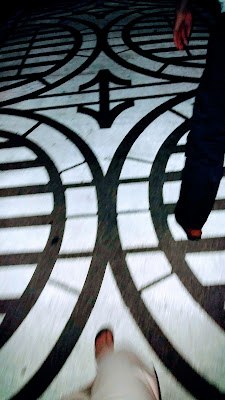 That's so Pittsburgh: I laughed out loud the night I realized this crosswalk downtown near The Point was patterned like the famous bridges over the Allegheny River.

You know what else is "so Pittsburgh"? Random reminders of the city's industrial past. The way the airport celebrates its multicultural past/present. Hipster coffee houses that serve cocktails. Okay, maybe that last one isn't unique to the Steel City, but they do an excellent job representing the type!
Posted by Kristen Ann Ehrenberger at 10:53 PM No comments:

Email ThisBlogThis!Share to TwitterShare to FacebookShare to Pinterest
Labels: architecture, art, humor, TSPGH
Newer Posts Older Posts Home
Subscribe to: Posts (Atom)
The blog title names my three main roles and goals in life: as a woman/wife (Frau), as a PhD in German history (Doktor), and as a future complex care specialist (Doctor). I write these posts to amuse myself. If they amuse you, too, please leave a comment!