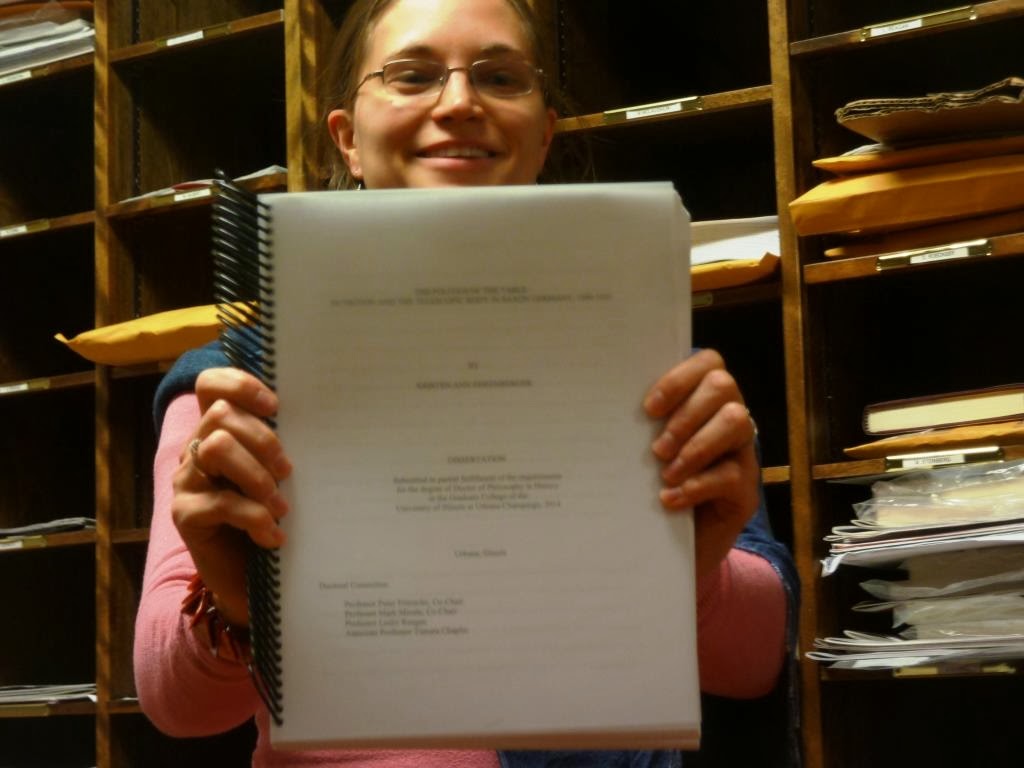 Now announcing Dissertation 2.0! Thanks to market pressure, this update to Dissertation 1.0 has been released two-and-a-half weeks early. The Politics of the Table: Nutrition and the Telescopic Body in Saxon Germany, 1890-1935 offers improvements to all of the features of the first model, an extended Introduction and Conclusion, and a full suite of Appendices and Illustrations. Due to timing and supply issues, we regret that we cannot offer Chapter 6 at this time.

Today a local United Methodist Church celebrated Peace With Justice Sunday with its second annual potluck and poetry slam. Dear Husband and I participated, each with our instrument of choice: he the piano and I my voice.

Because their theme was the Israeli-Palestinian conflict, I did some research into Palestinian poets. One of my favorites was Rafeef Ziadah, who writes beautiful and moving spoken-word poetry. You should listen to her here ("We Teach Life, Sir") and here ("Shades of Anger").

I did not think I could read her poems better than she does, so I kept looking and finally settled on Mahmoud Darwish (1941-2008), who has been called "the unofficial poet of Palestine." He once wrote, "Against barbarity, poetry can resist only by confirming its attachment to human fragility like a blade of grass growing on a wall while armies march by." However, he became more jaded over time. "I thought poetry could change everything, could change history and could humanize, and I think that the illusion is very necessary to push poets to be involved and to believe," Darwish later said, "but now I think that poetry changes only the poet."

I read perhaps his most famous poem, "Identity Card," from his published collection, Leaves of Olives (1964) and "The House Murdered," which was written during Israeli attacks on Gaza in 2006. I'm reading it in the photo to the right. The exclamation "Write down!" repeats over and over in the poem, as the speaker describes himself as an honest but angry farmer and father.

In an interview with Nathalie Handal in 2002 Darwish said, "We should not justify suicide bombers. We are against the suicide bombers, but we must understand what drives these young people to such actions. They want to liberate themselves from such a dark life. It is not ideological, it is despair." He was optimistic about the possibility of an end to the conflict and repeated a number of times, "There is hope." 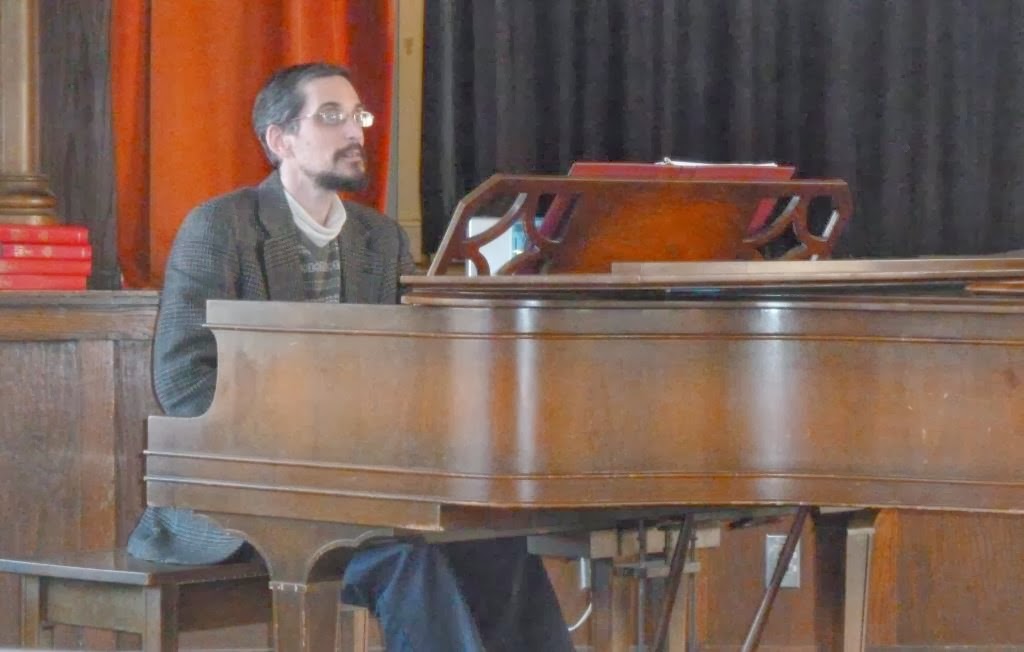 DH played a piece he composed entitled "Once." (Click here to listen to him play it.) It is based on the old hymn "Once to Every Man and Nation," which is based on the poem "The Present Crisis," by New England Romantic poet James Russell Lowell (1819-1891). Lowell wrote the poem in December 1845 as a meditation on the responsibility we have to right the wrongs in the world. I really can't recommend his long, over-wrought verses, but here are the first two stanzas of the hymn:


Once to every man and nation, comes the moment to decide,
In the strife of truth with falsehood, for the good or evil side;
Some great cause, some great decision, offering each the bloom or blight,
And the choice goes by forever, ’twixt that darkness and that light.

Then to side with truth is noble, when we share her wretched crust,
Ere her cause bring fame and profit, and ’tis prosperous to be just;
Then it is the brave man chooses while the coward stands aside,
Till the multitude make virtue of the faith they had denied.

Lowell suggests that we have only one chance to choose to be on the right side of issue, because it means little to jump on the bandwagon after it has become popular. DH's piece has repetitive motives that suggest--maybe--our one chance comes repeatedly. Lowell's issue was slavery. Darwish's issue was peace in Palestine. What's yours?
Posted by Kristen Ann Ehrenberger at 5:12 PM No comments:

Email ThisBlogThis!Share to TwitterShare to FacebookShare to Pinterest
Labels: history, poetry, social justice
Newer Posts Older Posts Home
Subscribe to: Posts (Atom)
The blog title names my three main roles and goals in life: as a woman/wife (Frau), as a PhD in German history (Doktor), and as a future complex care specialist (Doctor). I write these posts to amuse myself. If they amuse you, too, please leave a comment!