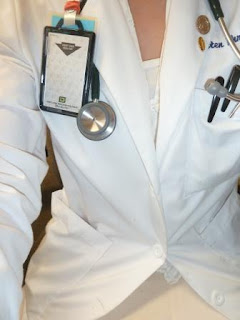 Last fall, I wrote an essay called "White Coat Blues" on my conflicted feelings about transitioning from graduate to medical school, as embodied by my white student "jacket." With a year's worth of experiences under my belt, I find the tone of the piece plaintive but its content still essentially true. Being a dual-degree medical student (and resident) means being in an awkward in-between place between expectations and competency. I will continue to be older than most of the residents and some of the attendings; some of them will respect me as a scholar, and others will only care that I know less medicine (or surgery ::cough::) than they do. Good intentions get you far in the third year of medical school, but in the end results matter--especially in surgery and on board exams. In some respects that much is very much like graduate school, where one is not promoted merely because a year has passed; completing the program requires the production of new knowledge and a block of text to prove it.

I have been studying for my next two board exams. One is an 8-hour computerized behemoth, the other is equally long but involves encounters with simulated patients. When I bring my white coat to the testing center next month, I will have emptied the pockets (no more jingle-jangle), and the proctors will use white tape to cover my name (, PhD) and school insignia. I will be Anonymous Medical Student #12. We are not allowed to talk about the exam ("The first rule of fight club..."), so instead I will leave you the observations I have gathered over the last year about when and why one might (not) want to wear a white coat and its attendant paraphernalia (name tag, pins, pens, pockets full of stuff), as it is by no means a necessary part of the clinical experience.


When you do want to wear a white coat:


When wearing a white coat is equivocal:

When you do not want to wear a white coat: 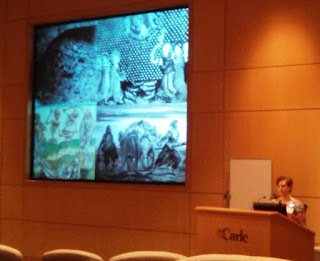 I had the great honor and pleasure of delivering the June Internal Medicine Grand Rounds lecture. It has two parts. First, I introduce the history of medicine as a discipline and make an argument for why I did not waste eight years of my life pursuing a PhD in history. Then, I use short vignettes from the development of modern nutrition in Germany around World War I to explain three contemporary myths drawn from the longer list set forth in the “Nutrition Myths and Healthy DietaryAdvice in Clinical Practice.” One theme is the observation that one generation’s scientific fact is often the next generation’s scientific myth. For those of you who missed it, here is a slightly expanded version.

(Turn up your speakers to hear me better.)
Posted by Kristen Ann Ehrenberger at 8:47 AM No comments:

I thought I would celebrate the end of my third year of medical school by sharing with you a Top Ten List of my most embarrassing moments from the first three years. I hope I don't collect as many from my last year--but between visiting rotations and traveling for interviews, I won't hold my breath. Without further ado, enjoy.

10. When I squirted myself in the face with the hand sanitizer at the door in full view of the patient and his wife. Slapstick humor: 1. My dignity: 0.

9. The time I nearly fainted in an examining room. The physician was interviewing the mother and patient while I leaned against the sink because there were not enough chairs in the room. I don't know if I locked my knees or if my blood sugar was low, but I got hot flashes, started sweating, and my vision flickered. I tried to wait it out and shifted position a few times before I finally excused myself to find a chair, a snack, and a drink of water. When I returned no one said anything, and the doc didn't ask me about it later, which was a relief. This is why, like any good hobbit, I eat second breakfast!

8. The time on the Labor & Delivery ward overnight that I was so excited to be "scrubbing in" to a vaginal delivery that I dropped my sterile gown on the floor, then put it on before securing my face mask, which I did--but only after clumsily donning my sterile gloves. The tech called me out on it afterwards, and I readily admitted it'd been a hot mess. The patient ended up needing an episiotomy, so I didn't even get to catch the baby.

7. The time I catheterized a woman's uterus instead of her bladder. And then the time that I, a resident, and a nurse tried to catheterize a patient on the operating table who didn't even have a bladder anymore. Finally someone lifted up his gown and noticed the urine-collection bag on his abdomen.

6. That time I fell off a rolling stool in the OR. When we started the case, the floor was still wet from mopping, and I had joked that it would be a miracle if I didn't slip and land on my head. There's a maxim in surgery, "don't stand when you can sit, and don't sit when you can lie down." Since I was observing, I grabbed a rolling stool and positioned myself in full view of the operation. While trying to shift my weight, I accidentally pushed the stool too far forward. I slid off the back onto the floor on my butt, sending the stool skidding toward the sterile operating tables and gowned-up surgeon. Thankfully she was able to stop it before it contaminated anything, and I wasn't hurt, although the nurses joked that they were so busy I had to do my own neuro checks q15 (every fifteen minutes) to watch out for concussion. 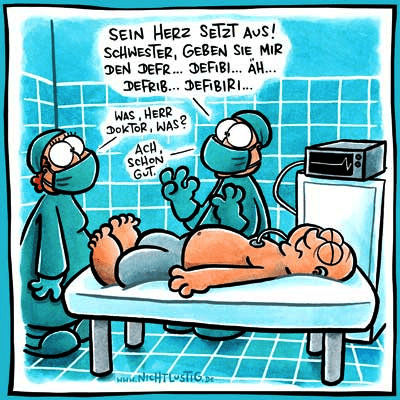 5. The time I tried to treat myself for a urinary tract infection with left-over antibiotics from my medicine cabinet and nearly overdosed on a muscle relaxant instead. It was the week before I sat for Step 1 (my first board exam), and I felt sure I should just get out of medicine right then and there, obviously having learned nothing from an entire year of pharmacology.

4. Did I ask a 44-year-old patient who had had a tubal ligation at 18 and a hysterectomy at 30 what she used for birth control? And when she told me "condoms," did I proudly include that information in my report to the attending physician, who promptly did a double-take? Yes, yes I did.

3. The time I gave myself acute kidney injury. I knew I was volume depleted from finishing my period and giving blood, but I wanted to bike 10 miles to and from the farmers market the next day, so I went ahead and ate the verrrry salty dinner Dear Husband had prepared, thinking the salt would help me retain fluid and increase my blood pressure in the morning. Instead, I woke up with periorbital edema (puffiness) so bad that I could barely open one eye. I ended up drinking ridiculous amounts of water to flush out my system.

2. The time I "diagnosed" an image on a medical website as pornographic. Here's the original copy from facebook:

The medical students and residents are crowded into the attending's office to go through a computerized dermatology case that involves a photo of a tattoo. Attending: Now what do you suppose it's a tattoo of? It is an idle question that has nothing to do with the case, which we've just collectively solved. Someone points out that it looks like a person. Someone else volunteers that it looks like an insect eating a man. It suddenly dawns on me: the "insect" legs belong to a woman, who is crouching in front of a man. "It's a blow job!" I blurt out. Silence in the room. Most of these people have just met me yesterday.
Attending: "Oh my goodness, I think you're right!" Verdict: It was a tattoo of Olive Oyl going down on Popeye.


1. The time I tried and failed to find a posterior tibial pulse in a patient's left leg. It was a prosthetic leg.
Posted by Kristen Ann Ehrenberger at 7:47 AM 1 comment:

You might be in the last week of your surgery rotation, if you find yourself eating the same Chinese take-out leftovers for dinner for the third time in four days.

Newer
Posted by Kristen Ann Ehrenberger at 8:53 AM No comments:

Surgery Rotation: Brought to You by the Letter "F"

Do you remember how on Sesame Street, each episode is "sponsored" by letters and numbers? Well, my surgery rotation has been brought to you by the letter F, as in "fantastic." It seems like everything that happens lately earns the same response:

Surgeon lets me use the scalpel and the electric cautery tool during a procedure? Fantastic!

Resident sends me to remove the staples from a patient's abdomen? Fantastic!

The gastric bypass patient has a leak in her esophagus? Fantastic.

The man who had colon surgery turns out to have rectal cancer? Fantastic.

My patient with cancer has bacteria in her blood and a hole in her intestine? Fantastic. She would not have survived an operation, so there was nothing for the surgery team to do but recommend antibiotics and wait. She died, twelve hours after going on hospice, three days after being admitted to the hospital, maybe six weeks after being diagnosed with cancer. She left behind a blended family with children ranging from middle school to the military.

As my community celebrates Relay For Life this weekend, we are spending a lot of time talking about cancer and remembering those whose lives have been impacted by this frustrating disease that continues to baffle modern medicine and to challenge us individually and together. I think of Susan, Julie, Keith, Linda, Essie, Tom, Jen, Rodney, Joanne, Glenna, Dale, Dan, Betty....

Gardening while on surgery rotation.

The spider plant is doing particularly well for having been abandoned in a cup of water on top of the china cabinet to root for several weeks. As for the rest...I will plant all three columbines outside and see if any of them grow next year. The dill and pansy plants are beyond hope of salvage.

Editor's note: Alas and alack, the parent and grandparent spider plants do not seem to have survived the fall semester of the fourth year of medical school.

Newer
Posted by Kristen Ann Ehrenberger at 10:48 AM No comments:

Email ThisBlogThis!Share to TwitterShare to FacebookShare to Pinterest
Labels: garden, medical school, WMSLL
Newer Posts Older Posts Home
Subscribe to: Posts (Atom)
The blog title names my three main roles and goals in life: as a woman/wife (Frau), as a PhD in German history (Doktor), and as a future complex care specialist (Doctor). I write these posts to amuse myself. If they amuse you, too, please leave a comment!