For dinner this week I decided to try a new recipe: Curried Lentil and Spinach Soup. I got it years ago from Epicurious. (Does anyone still use that site?) Here is my version:

Heat oil in heavy large pot over medium-high heat. Add next 4 ingredients (onion, celery, carrots, cloves); sauté until golden, about 10 minutes. Stir in curry powder, ginger, cumin, bay leaf, and dried crushed red pepper. Add water and dried lentils; bring to boil. Reduce heat to medium-low and simmer uncovered until lentils are tender, adding more water by 1/2 cupfuls to thin soup, if desired, about 25 minutes. Season soup with salt and pepper. (Can be made 1 day ahead. Chill soup uncovered until cold, then cover and keep refrigerated. Rewarm soup over medium heat, thinning with water if desired before serving.) Ladle soup into bowls. Top each serving with a spoonful of yogurt and a handful of baby spinach. 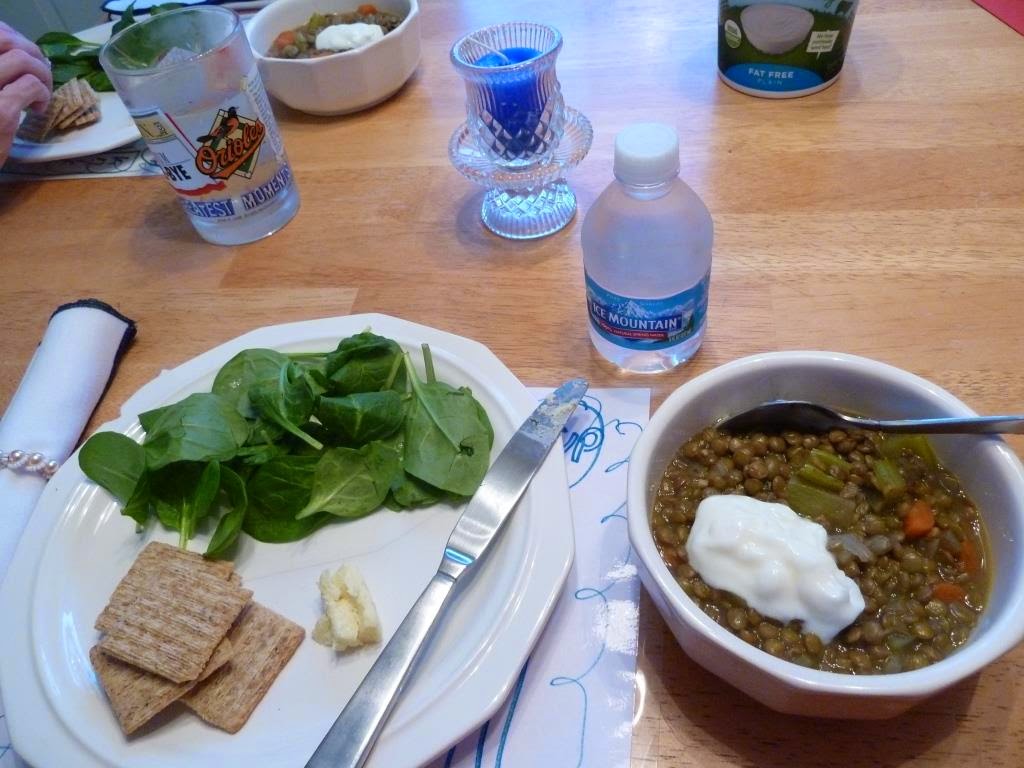 Personalized place mats and candle by niece KH (Cincinnati, OH).
His and Hers beaded napkin rings by KF (Dresden, GER). Not sold in stores.

I went ahead and used both the curry powder and red pepper (in my case Turkish chili powder). The yogurt and spinach thicken the soup and temper some of the spiciness. I think the recipe could use a little tweaking: I found the lentils undercooked and the vegetables overcooked. Next time I will add the carrot and celery toward the end of the process, after the lentils have mostly softened. And I will add more cumin. You can always add more cumin. Pairs well with crusty bread + spread for you vegans, or crackers and cheese for you vegetarians. I imagine you could go carnivorous with the addition of some sausage.
Posted by Kristen Ann Ehrenberger at 7:43 PM No comments:

The Second City for the second time

For our first wedding anniversary, Dear Husband and I took a trip to Chicago. We recreated parts of our Denver honeymoon, visiting an art gallery and a botanical garden. We also got all dolled up for dinner at a fancy steak house and a show by The Second City. Most of the comedians you have heard of (and a great many beside) have come through this sketch and improv group. They may be famous, but they're still a casual comedy club, and the guy who took our tickets teased us that we had increased the style quotient considerably that night.


This past weekend I got to hear The Second City's traveling group. No, I haven't traded in DH for another model! A friend of ours ended up with an extra ticket, and I'm sure either of us would have been more than happy to go, but DH had a gig with his band that night. So AS and I had dinner downtown with a church group and then walked over to join the very long line to get into the theater. The place was sold out, though half a row next to me was empty--maybe the snow kept them away? That's a pity, because this "B team" really brought down the house. We were particularly impressed by their ability to make up song lyrics on the spot.

As a sign of the times, perhaps, they opened and closed the show with skits involving gay (male) relationships (and a sketch in the middle involved a gay teen who sings). One improv ended up with a lesbian relationship, but we hope in the future they will be considered suitable subjects for scripted scenes. You can imagine the kind of awkward dialogue between a stereotypical guns-, sports- and alcohol-loving, school-flubbing older brother and his younger brother's stylish (male) prom date. What happens when it's an older sister and her younger sister's (female) date? Or, what do they say if we drop the trope of suave homosexual and knuckle-dragger heterosexual? The gay scenes in the show involved two teens and a gay wedding. Where are the jokes from gay couples who have been committed for decades? Is there a genre of gay nursing home jokes? DH thinks I'm asking too much of a bunch of 20- and 30-somethings, but maybe the tropes will change with the times.

Other favorite skits involved whale singing and a glass of water, a reporter asking a football player increasingly probing questions about his simple faith that God had blessed him with a touchdown, and a local car dealership with one of those dancing fabric "men" whose arms wave in the wind. It was a fun night, and I laughed so hard I gave myself a headache. Great comedy: it hurts so good.
Posted by Kristen Ann Ehrenberger at 2:34 PM No comments: 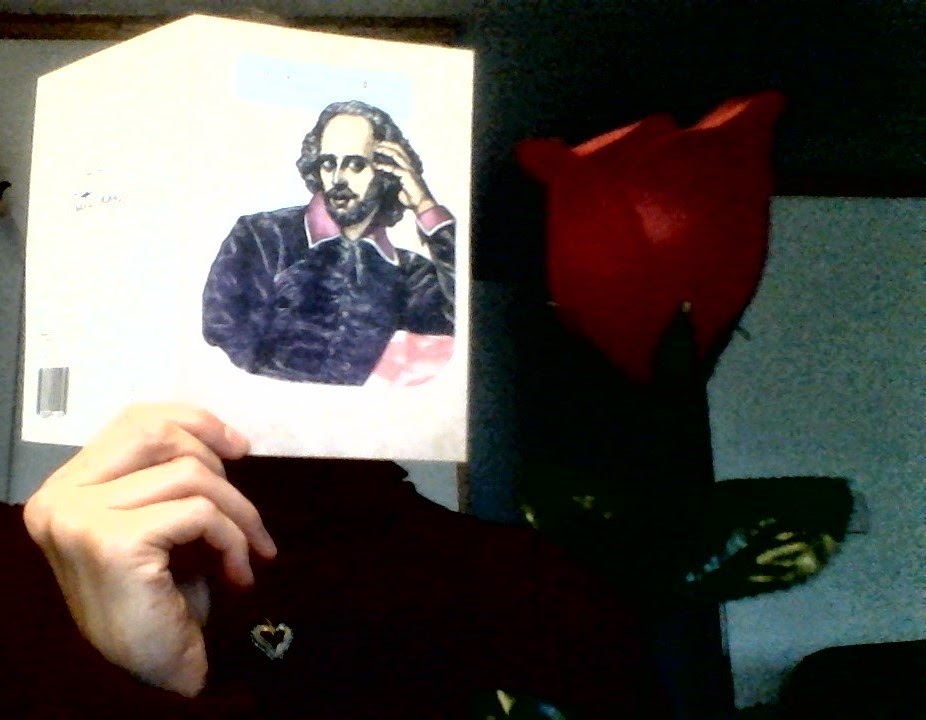 "You are totes adorbs." ~Shakespeare

Dear Husband and I had a long-distance relationship the four years I was in college and then the first year of graduate school. The February of my junior year, he surprised me by flying out so we could celebrate Valentine's Day together. (I remember, because I had to leave my MCAT class early on Saturday morning to see him off to the airport.) The other years we celebrated over Spring Break. He called it "Eastern Orthodox Valentine's Day," because Orthodox Christmas and Easter fall later than their Western Christian equivalents. It's a made-up holiday, another excuse for showing each other our love and appreciation, so why not celebrate on the day(s) that work with our schedules?

This year, love is a slow-motion celebration. I had call on Valentine's Day, so DH decided to surprise me with roses, a card, and dinner out a week early--for what he called "Southern Orthodox Valentine's Day." He must have thought I needed a pick-me-up after a difficult week of in-patient pediatric medicine--and he was right. Unfortunately, we discovered that night that our favorite locally owed Thai restaurant has apparently closed. Why else would it be dark at 6:30pm on a Friday night and the phone number disconnected? It's not the first "ethnic" restaurant that has closed in that strip mall; apparently Americana and Italiana do better in this corner of town. So we drove halfway across town to the locally owned Mediterranean restaurant, where we stuffed ourselves with lovely pita and cucumber-tomato salads and brought home enough leftovers for another full meal.

The next night, Dear Husband (a musician) and I (an academic) had tickets to the premiere run of a new play about a musician (Beethoven) and an academic (a fictionalized musicologist from the University who develops ALS). I am afraid I found the script, the set design, and the directing almost but not quite good enough. It doesn't help that I watched Wit over Winter Break, which does academic-discovers-herself-through-illness with more mature humor and philosophizing, or that at least half of the action of this play takes place in Bonn with jokes about how Germans don't have a sense of humor. If you can suspend your disbelief about the marginally competent nurse-boyfriend being able to take a several-months vacation from his hospital job to accompany the defiant-but-really-grieving daughter-girlfriend to care for her workaholic-mother--and if you can ignore the constant refrain of "Master, Master" erupting from the lips of Igor--I mean Anton Schindler, "friend of Beethoven"--you might cry when the pianist plays and the cast sings the "Kyrie" from Beethoven's "Missa solemnis." After that high point, the playwright couldn't leave well enough alone, so there two more scenes that try to tug at your heartstrings, but I felt as if that emotion had been played out by then. Nevertheless, I am glad the company took the risk on a new work, and that we attended. 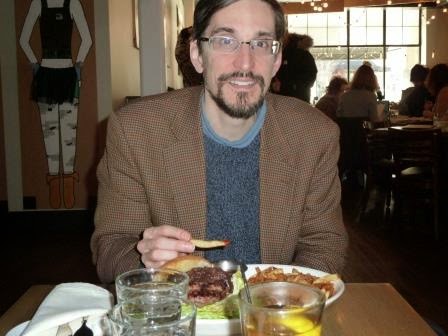 On Valentine's Day, after I had completed my clinical duties, DH and I attended a presentation about the rest of medical school, taking board exams, and applying to/matching at a residency program. It's an anxiety-inducing revelation that drove my Peds TA and her husband straight to the liquor store last year. We went out to lunch instead, where I anchored my Hot Toddy with a black bean and onion ring burger as big as my face. I promise I'm smiling behind all that. Aren't I? 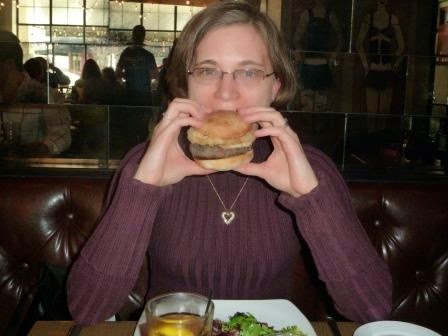 This year, we did all the expected things to celebrate Valentine's Day, albeit not on the same recognized day on the calendar. They were nice, out-of-the-ordinary things to do for each other, though I wonder if in a year they will mean as much as me cleaning out the cat box and taking out the trash and recycling on a freezing-cold night so DH didn't have to. Or as touched as I was when DH picked out a loaf of whole-grain German Dark Wheat bread with No High Fructose Corn Syrup and 6g Dietary Fiber, since my favorite grocery store closed and I ran out of the local organic bread I had been storing in the freezer. This time next year I will be finalizing my Match rank-order list for residency. I wonder what "love" will mean then?
Posted by Kristen Ann Ehrenberger at 6:04 PM No comments:

Email ThisBlogThis!Share to TwitterShare to FacebookShare to Pinterest
Labels: art, food, Germany, humor, marriage, medicine, music, relationships, research
Newer Posts Older Posts Home
Subscribe to: Posts (Atom)
The blog title names my three main roles and goals in life: as a woman/wife (Frau), as a PhD in German history (Doktor), and as a future complex care specialist (Doctor). I write these posts to amuse myself. If they amuse you, too, please leave a comment!