That's So Pittsburgh: The Pirates Parrot 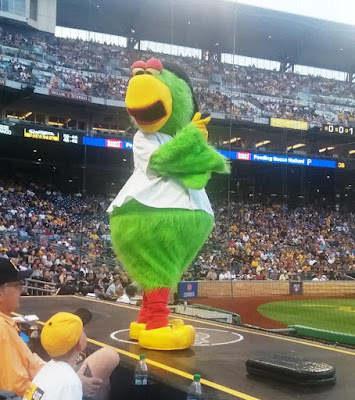 That's so Pittsburgh: the Pirates Parrot sat at the end of our row, two rows from the visitors' dugout on the third-base side of PNC Park. Next he hopped up on the dugout, "danced" for us by wiggling his ample bum, refused to let a fan take a picture with his head in the parrot's mouth, and promptly melted into a puddle in the 90+-degree heat. At his feet you can see the two boogie boards covered in black tape that he uses like a flip cell phone.


Other TSPGH moments you might enjoy: Mrs. T's pierogies racing on the Jumbotron and Steelers swag spotted in our neighborhood.
Posted by Kristen Ann Ehrenberger at 7:58 PM No comments: 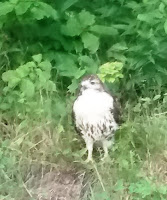 After church on Sunday, My Awesome Parents (MAP), Dear Husband (DH), and I (FrDrDr) drove a little ways southwest of the city to the Pittsburgh Botanic Garden. I had chanced upon a Groupon for reduced entry and happily snatched it up. On the way, we were treated to a hawk standing at the side of the road, just hanging out in the sun.

The decent-sized parking lot was relatively full, which suggests that the PBG is more popular than I had thought, not having heard of it the first year we lived in the city. There are many picnic tables set up under a big white awning next to a few kiddy games and a port-a-pot, but no trash cans: PBG asks that visitors haul out their garbage with them. 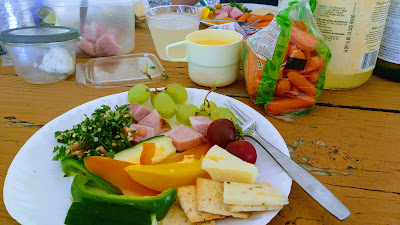 We enjoyed a delectable picnic at a table under an awning and then crossed the road to the gardens. Opened in 2011, the PBG is a work in progress on reclaimed land from a coal mine in Settler's Cabin Park. They have a formal garden for weddings and parties; a dogwood meadow with gazebo and birdhouses; a lotus and lily pond; and a couple of wooded trails. A "senses" garden is under construction. The trees provided welcome relief from the hot afternoon sun, and we were tickled to find the activity spaces set up for the young and young at heart: a hermit hut, a bookworm glen, and an enormous bird nest. There are also newspaper mailboxes in front of certain trees that let you guess the year the tree was planted and then tell you what was happening in the world that year. 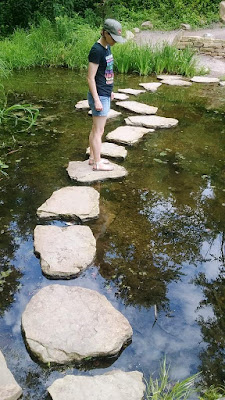 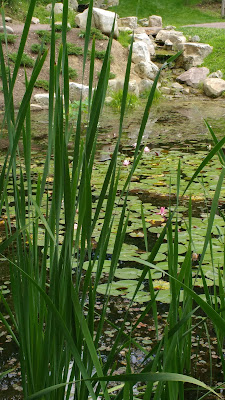 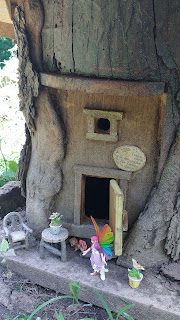 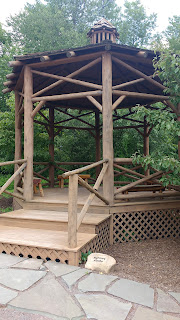 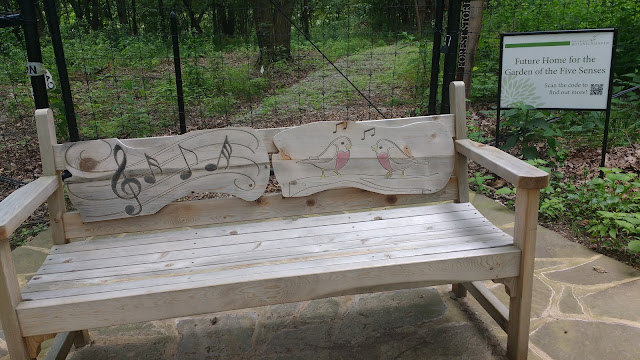 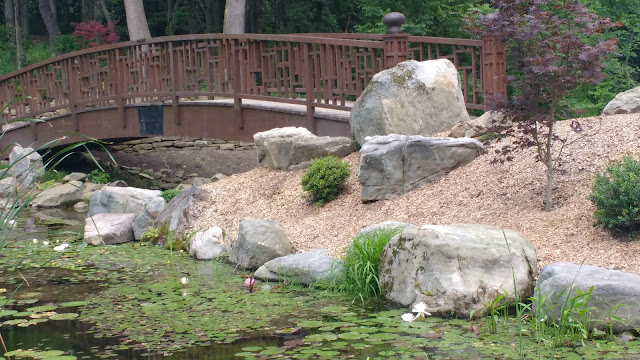 I don't imagine that we will visit as often at the Phipps Conservatory, but we will definitely be back to discover what else they have done, built, and planted.

That's So Pittsburgh (TSPGH) has also visited Kennywood Amusement Park and The Strip District.
Posted by Kristen Ann Ehrenberger at 5:02 PM No comments:

That's So Pittsburgh: Eating in the Strip District 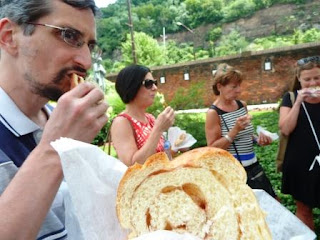 For Christmas, My Awesome Parents (MAP) gave me a gift certificate to 'Burgh Bits & Bites, a local tourism outfit that specializes in tasting tours in some of Pittsburgh's various neighborhoods. We finally found a chance to use it when the weather wasn't rainy, and I wasn't working. Destination: the Strip District, the 3/4-mile strip of land four-blocks wide between the Allegheny River and The Hill. It has a history of immigrants, enterprise (including the original Carnegie iron, later steel works), shipping, and wholesaling. In fact, 80% of the business conducted in the strip is wholesale (baked goods, cured meats, cheese, tortillas, etc.). Interestingly, of the 200+ businesses there, only two are not locally/family owned (McDonald's and Penzey's Spices). And they draw from a variety of ethnic and cultural backgrounds, including Italian, Syrian, African-American, Greek, Polish, and Mexican. 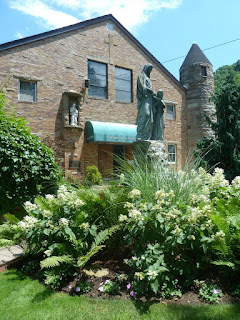 Our food and architecture tour started in the walled courtyard of Old St. Patrick's Church. The courtyard is a lush oasis in the middle of an urban, industrial landscape. The church was the first founded by Pittsburgh Irish Catholics and has the distinction of being one of only three in the world with scala sancta ("holy stairs"), which should be ascended on one's knees while reciting a litany of prayers. Our entertaining guide, Richard, also told us about the time the church burned to the ground in 1935 while the volunteer firefighters brawled over who would have the honor of saving it. The round tower to the right of the current building is the only part that survived the conflagration. Richard gave us freshly baked cinnamon bread from Mancini's Bakery to keep our hunger at bay.

Then we visited Parma Sausage for tastes of salami; Labad's Grocery for fresh hummus and warm pita; Prestogeorge to ogle their enormous coffee roasters; and Mancini's to peer in the plate-glass front window. 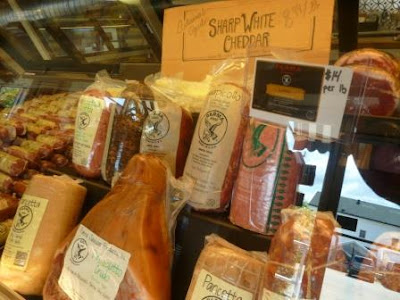 Next we contemplated restoration strategies for various buildings, from a rowhouse whose arched windows had been bricked up instead of having custom-made windows installed; an old cork factory turned into loft apartments; and St. Stanislaus, whose twin towers were damaged by the methane-fueled explosion of bananas ripening in a warehouse across the street in 1936 (yes, really; truncated towers below).

By this point it was mid-afternoon with little in the way of actual food, and Dear Husband and I were starting to get ravenous. So we were relieved to sit in the air conditioning and be offered greasy slices of pepperoni roll at Sunseri's. Alas, DH succumbed to the peer pressure to finish off the box, and I had eaten three slices with copious amounts of red sauce, so by the time we got up the street to S&D Polish Deli, we barely had room for our mashed potato and cheese pierogis (sharp cheddar cheese > sweet farmer's cheese).

It turns out those were the main dishes of our tasting tour and that it was time for desserts. First was meles (fruit turnovers) from Colangelo's. Too bad they ran out of raspberry; DH had to settle for apple, while I chose apricot. We ate them for breakfast the next morning. Then came biscotti from Enrico: cherry for him, Black Forest for me. Of all the establishments we visited, this was the only one I had heard of (except Parma Sausages)--in fact, we had even met Enrico our first summer in the 'Burgh, at the little farmers market south of us. We haven't seen him this summer, as the market is even smaller than it was last summer, and we may have to find another one to patronize, as I prefer to buy organic produce from local farmers, not from people who are reselling others' products at marked up prices. 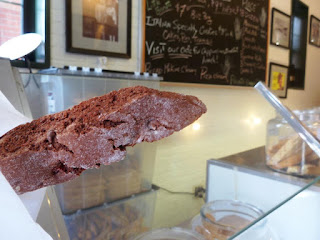 But I digress, much as we did on the tour, venturing down a covered alleyway into the former garage that is now Enrico's cafe, which offers brick-oven pizza at lunchtime and bread-baking brunch on Sunday mornings.
Finally, we trundled into the Stamoolis Brothers Greek grocery store, which offers an enticing variety of local and imported foods. They offered us little tasting plates of real Greek yogurt with orange preserves, French crostini with honey, nougat, cheese, and non-alcoholic ouzo soda. All in all, a warm but not wet afternoon getting to know our new city better. For the cost of our tickets we got all that food, a bottle of water each, and a tote bag. We were so full that we completely skipped dinner, and now we just have to decide which neighborhood to eat our way through next! 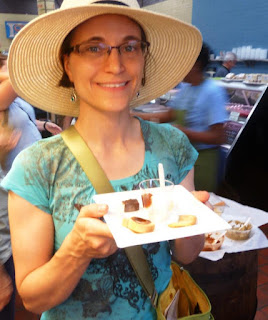 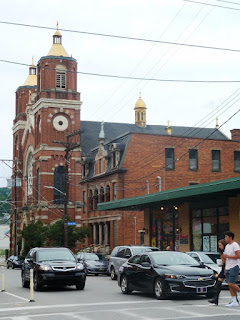 If you enjoyed this blogpost, you might like these other food-themed TSPGH entries: one about how making pierogis at home is easier than you think, and one about the tradition of Friday fish fries during Lent.
Posted by Kristen Ann Ehrenberger at 9:21 PM 1 comment: 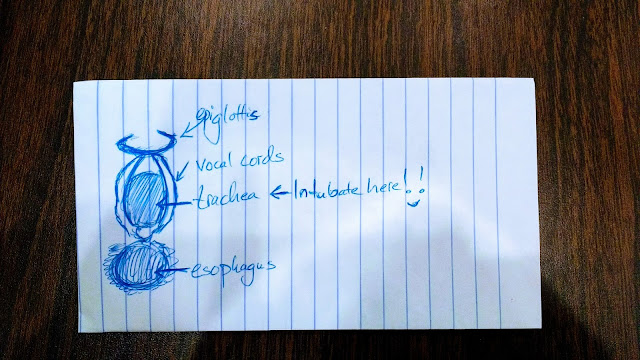 Sometimes residency looks like more training for dealing with emergencies. After I intubated the plastic baby's stomach twice a row, one of the instructors drew me a picture with the helpful admonition​: "Intubate here!!"

Posted by Kristen Ann Ehrenberger at 9:43 AM No comments:

Email ThisBlogThis!Share to TwitterShare to FacebookShare to Pinterest
Labels: art, medicine, residency, WRLL
Newer Posts Older Posts Home
Subscribe to: Posts (Atom)
The blog title names my three main roles and goals in life: as a woman/wife (Frau), as a PhD in German history (Doktor), and as a future complex care specialist (Doctor). I write these posts to amuse myself. If they amuse you, too, please leave a comment!