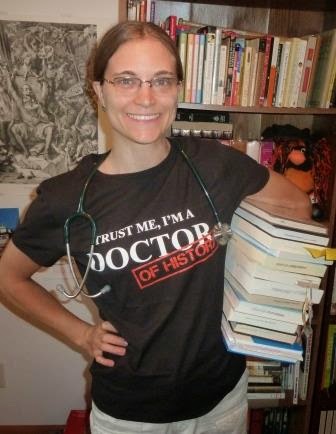 “Stop reading and start writing!” said my senior dissertation adviser on, I think, two occasions. So I did. He was trying to snap me out of the graduate-student dilemma of being a few years (or sometimes decades) behind in knowledge of the literature in one’s academic field. Why won’t other scholars stop publishing, at least until we catch up? One of the hardest lessons of graduate school is that you cannot read everything—even everything that you “should” read. When it comes to writing the dissertation, it is better to stop procrastinating by reading “just one more” book or article that contains someone else’s position on the subject and articulate your own position. The only time I relapsed into reading secondary sources was when I needed to know something factual (e.g. how working-class European families organized meals) or when I wanted to remind myself about a particular historian’s position, so that I could argue against it (e.g. that communal kitchens were unpopular and unsuccessful). Three years later, I had completed, defended, and deposited more than 300 pages of prose on the merging of science and politics in the rationing systems of World War I-era Germany. And I had stopped reading.

The weekend before graduation, I attended the annual conference of my professional organization, the American Association of the History of Medicine. During one of the keynote talks, which involved “shout-outs” to numerous well-known historians of medicine, I realized that I had managed to get through a decade of graduate education without having read some key texts in medical history. Granted, many of these cover American topics and so are not directly relevant to my own work, but being a medical humanist in the US, it is easier to talk to one’s clinical colleagues about our shared national medical history. So I promised myself that I would read one book in the history of medicine every month until I graduate from medical school. So far that has meant a few pages here and there at night before falling asleep, and many pages in airports and on planes while traveling one weekend. Although, now that Dear Husband and I have started preparing for the 32-week-long Disciple I Bible study together at bedtime, I may have to block off another time when I am not in clinic or studying for exams to recover this crucial bit of my identity and intellectual life.

In June I read Medical Muses: Hysteria in Nineteenth-Century Paris, by Asti Hustvedt. Written for the general reading public, Medical Muses describes in detail the lives and medical cases of three women made famous at Jean-Martin Charcot’s psychiatric hospital in Paris: Blanche, Augustine, and Geneviève. In the 1870s and 1880s, Charcot developed a theory of hysteria involving epileptic “fits,” catatonic poses, hypnotism, promiscuity, confabulation, and insensitivity to pain. Hustvedt attempts to recover these women’s lives before and after their incarcerations at the Salpêtrière and to show how they still had some autonomy over their symptoms and representations, despite the fact that Charcot literally displayed his favorite patients like circus animals, opening the lecture hall on Tuesday afternoons for demonstrations of their symptoms. Hysteria was a leading medical theory until Charcot’s death in 1892, when it was quickly swept under the rug of medical misadventures. He is still remembered for Charcot-Marie-Tooth Disease and other neurological and medical phenomena. For someone who is not trained as a medical historian, Husvedt does an admirable job explaining the social and medical contexts as well as the various images of the three beautiful, afflicted women.

Up next: Susan Reverby’sExamining Tuskegee.
Posted by Kristen Ann Ehrenberger at 7:43 PM