Six months ago, Dear Husband and I joined dozens of volunteers with the Western Pennsylvania Conservancy and the Pittsburgh Redbud Project to plant trees on the North Shore. Last night I realized Saturday was Earth Day and that I could use part of my day off to plant native species in the new bioswale I've been watching them construct near my parking garage at work. A bioswale is basically a rain garden with storage tanks underneath. The idea is to capture rain water so that it nourishes plant life that cleans the air and protects critters rather than going into the city's drainage system. Pittsburgh's storm drains and sewer system run together such that after a particularly hard rain or large snow melt, the runoff causes the sewers to overflow into the three rivers. Gross. 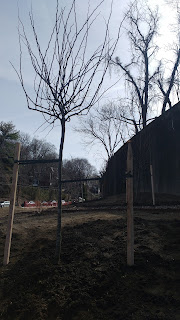 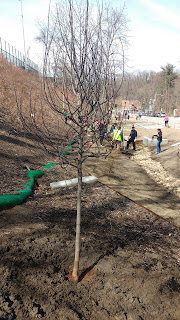 A good crowd of all ages, including representatives from a couple local Target stores, quickly put a couple dozen hydrangeas and nine tail bushes into the fresh dirt. Then we wrestled a number of juvenile hornbeams and redbuds into the ground. Dave, Sue, Kristen, and I planted a redbud we named Emily (after the project director) at the foot of the hill. At the top of the hill, Wes and I eventually got another redbud into a muddy hole while I told him about the 16 new redbuds that beavers had gnawed off on the North Shore. Beavers and redbuds are both native to these parts, although hunting and pollution had killed off the original Pennsylvania beavers such that transplants were brought in from Wisconsin and Canada. Wes asked what beavers didn't like, and we settled on predators such as wolves, so I named the second tree Lobos to ward off any water rodents that might be lurking in the Hill District!
Posted by Kristen Ann Ehrenberger at 12:11 PM