Ever since learning the manual alphabet while at a Girl Scout leadership camp out as a teenager, I've wanted to know more ASL. Between gymnastics and dancing (polka, waltz, swing, modern dance, blues, tango...), I have long since realized I am a physical person, comfortable in my body. I like to move. Old people at church smile at me for swaying to the music of hymns Sunday mornings, and Dear Husband teases me that I already talk with my hands. So it has been natural for me to incorporate both blues and ASL into my liturgical dances.

Posted by Kristen Ann Ehrenberger at 10:51 PM No comments:

Email ThisBlogThis!Share to TwitterShare to FacebookShare to Pinterest
Labels: language 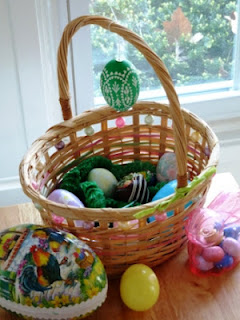 It's an egg-themed post for the holiday! Here is an Easter basket I made up for myself this year. It includes half-a-dozen eggs:


1) The green egg hanging from the basket handle is a blown egg painted in traditional, Central European fashion. It is a gift from a friend in Dresden that I was amazingly able to bring back with me.


2) In the basket are a couple of plastic eggs, one of which is full of pennies for the church youth going on the Appalachian Service Project (ASP) this July to Tennessee. They are collecting a mile of pennies (18,874!) to pay part of the cost of renting vans to take the whole team over there.


3) There are also one Cadbury Creme Egg and one Cadbury Caramel Egg. Sooo good but sooo sweet. Did you know Cadbury only uses cocoa that is certified to be slave-free? (70% of the world's cocoa comes from West Africa, where child and slave labor is rife.) 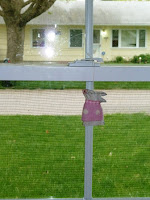 4) In this shot you can see two of the hard-boiled eggs we dyed (see below).


5) In the hollow pink rabbit are what's left of the bag of malted Robin's Eggs I have been eating all during Lent. I luuurv malted chocolate Easter eggs.


6) The big egg outside the basket was a present from a friend in Dresden. Made of lacquered paper and hollow on the inside, it came with the wooden bunny you see to the right, who is now gracing the window in our kitchen. 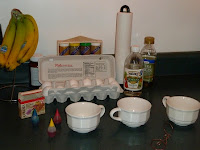 As to the dyed eggs, Dear Husband remembered a special dying process his family used when he was young. They added the dye to a big bowl of water, let the colors overlap, and dipped the eggs in and out. They would come out all swirled. Unfortunately, FIL told us that dye was discontinued, but he and MIL had found a work-around: hot water + white vinegar + food coloring + canola oil. You have to mix a tablespoon of everything else together before adding the water. 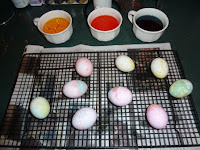 Because we didn't have any lighter oil, we substituted olive oil. Although it is slightly yellow, we didn't notice any difference with the coloring. We had to dip them three times, each time waiting for the dye to dry and wiping off the oil before dipping again. We only did nine eggs this year, so we just used the primary colors of yellow, red, and blue. Next year if we do more eggs, we may use more colors. And maybe glitter? 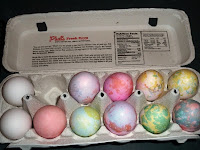 Here they are! Tie-dyed eggs. The couple on the bottom-right turned out the best. The two on the left are still raw, insurance, if you will, in case one of us wants to make scrambled eggs--or (better!) chocolate-chip cookies--this week. :-) We'll eat them for breakfast (with Kräutersalz), lunch (egg salad), and dinner (on green salad). Also, DH introduced me to the tradition of "egg battles," where the other person takes a crack at your egg with his or hers, and then you flip them around and do it from the other direction. Unlike when we play racquetball, sometimes I win!

Happy Easter from the three of us! 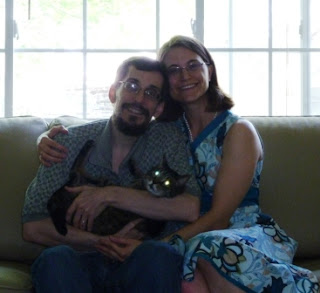 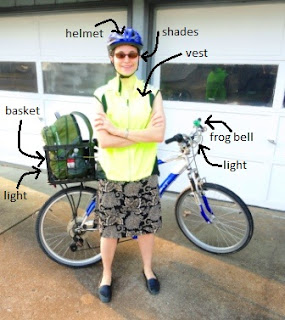 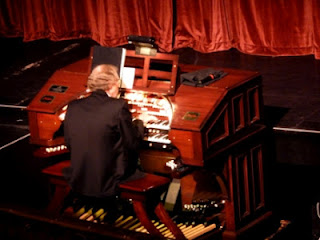 Last Saturday evening Dear Husband and I went to an organ concert, but it was unlike any of the other organ concerts we have attended before. You see, DH is a pianist/organist/keyboardist, so he is always very interested to hear other organists play pieces on different instruments. You may remember that last spring he came to visit Bach's churches in Leipzig and stayed with me. This year we discovered a local campus church does a series of Thursday-noon concerts during Lent and attended two of those. He can tell the difference between "French" and "German" pipe organs, and even if he hasn't played a particular piece before, he often knows about the composer. Being a classically trained musician, he can follow all the melodies and variations and things. Me, I spend a lot of time looking at the decorations in the church. For instance, this is what I remember of the recital we heard in the Nikolai (katholische) Kirche in Leipzig (May 2011): 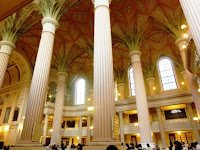 But Saturday's concert was different, because rather than going to a church to hear a pipe organ, we were at the Virginia Theater for the re-dedication of their "mighty Wurlitzer" theater organ. It's an old vaudeville theater (1921) that the local Park District currently owns and is renovating. DH had actually played this theater organ for one of The Chorale's New Year's Eve concerts about three years ago, but it was in such bad condition that it was hard to figure out what key and registration in which to play the songs so that enough of the notes would sound! So he was very impressed by the work the local Buzard organ company did in refurbishing the organ. Not only are all the bells and whistles working again (literally!), but they re-finished the console in beautiful, natural wood AND added two extra ranks of pipes that the original theater owners intended to install but never did for lack of funds. 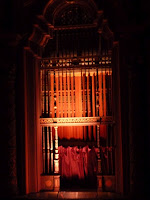 To celebrate the re-dedication, the Park District invited nationally recognized theater organist Chris Gorsuch to play a concert--but not of traditional pipe organ works by Bach or Dupré. Rather, he showed us the different kinds of orchestral sounds and sound effects the organ can imitate, played some movie music and some Gershwin, and ended by accompanying a 1929 Laurel & Hardy silent film, Liberty--just what the Wurlitzer was originally intended to do. The short by "da boys" was a stitch, but for the first 3/4 of the evening there was little other visual stimulation. So I was amused to note how entranced our seat neighbors were by the wooden shutters used to control the volume. All the pipes are on the right side of the hall, behind this decorative lathed grill (left); the light-colored slats behind them opened and closed as Gorsuch pedaled. They didn't make much noise, but their constant movement caught the eye. I guess I'm not the only one who looks around a lot during an organ concert!

During his remarks at the start of the evening, John Paul Buzard twice referred to the Wurlitzer as "our municipal organ," and I confess I felt a bit of civic pride to have elected to spend a Saturday evening with other arts-minded citizens listening to a historical theater organ. It made me wonder, Is this what it feels like to live in a small town??

You can click here for a 2-minute video about the refurbishing process and actually hear the organ.
Posted by Kristen Ann Ehrenberger at 11:04 PM 2 comments:

Email ThisBlogThis!Share to TwitterShare to FacebookShare to Pinterest
Labels: history, music, organ
Newer Posts Older Posts Home
Subscribe to: Posts (Atom)
The blog title names my three main roles and goals in life: as a woman/wife (Frau), as a PhD in German history (Doktor), and as a future complex care specialist (Doctor). I write these posts to amuse myself. If they amuse you, too, please leave a comment!