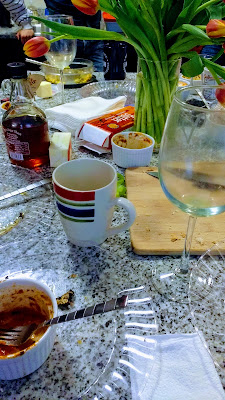 In one of the exceedingly rare moments when none of my three cohort-mates and I was working AND another of our favorite couples was free, we got together for a birthday brunch. Sometimes residency looks like the remains of a delicious meal, cooked and enjoyed among friends.

Posted by Kristen Ann Ehrenberger at 12:24 PM No comments: 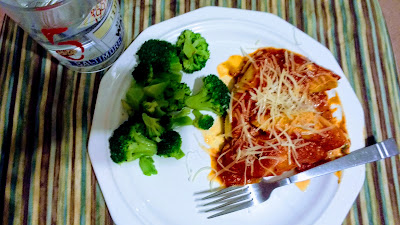 Now that my schedule is lighter, and I am back to cooking, I am  simultaneously alleviating and adding to Dear Husband's shopping and cooking burdens by diversifying our menu. Feeling in the mood for pasta, I dug up a Better Homes & Gardens recipe that I had attempted--and cryptically annotated--once before. We enjoyed the results, but in true Frau Doktor Doctor fashion I only sort of followed the book, so for posterity I have tried to recreate what I ended up doing here.

1. The recipe calls for 8 large manicotti shells. DH was able to find a box of 36 "jumbo" shells that are "jumbo" only in an advertising sense. (Apparently there were 25 the last time I made this dish.) Boil however many of them there are for ~10 minutes. When you are delicately trying to peel them apart later, wish you had rinsed them in cold water.

2. Meanwhile, steam 1/2 small box of baby spinach and press out any extra liquid. The recipe calls for a 10oz bag of frozen, but I wrote "1.5 lbs fresh spinach" in my cookbook the last time. Halfway through filling the shells realize you need to double the recipe. Steam the other 1/2 of the box.

3. Beat 2 eggs with 2/3 cup broth, ~1 1/2 cups ricotta cheese (something more than 1 tub; we happened to have extra in the fridge), 1 cup grated Parmesan cheese, and the spinach. I gave up on the lemon zest when I couldn't grate the lemon with my grater.

4. Spoon the mixture into the shells, and layer them in a 2-quart baking dish. The recipe calls for a white sauce, but it's a lot easier to just empty a jar of your favorite red tomato sauce over them.

5. Bake, covered, at 300F for 30-35 minutes. Let stand ~10 minutes while you prepare a vegetable or salad. Top with extra Parmesan and enjoy while re-watching a favorite movie--might I suggest Harry Potter and the Goblet of Fire?


Editor's Note: If you're interested in more FrDrDr recipes, check these recipes for 4-bean salad, gumbolaya, or maybe chickpea-saga spinach.
Posted by Kristen Ann Ehrenberger at 7:19 PM No comments: 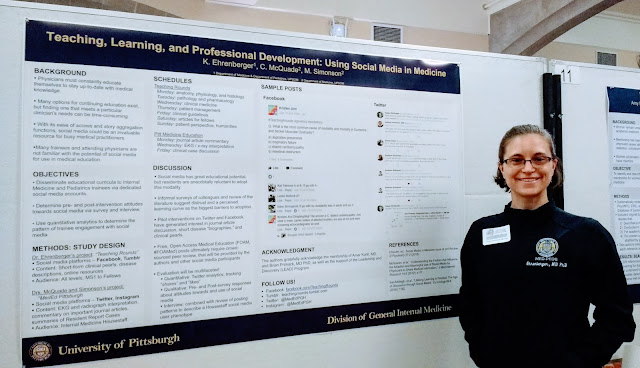 Sometimes residency looks like a poster presentation about your group research project on medical education on social media.

Newer
Posted by Kristen Ann Ehrenberger at 12:27 PM No comments:

Lent starts this week, which means food-themed holidays (or should that be "holiday-themed foods"?), such as pancakes on Shrove Tuesday and King Cake for Mardi Gras. Dear Husband and I were invited to a Louisiana-style shin dig this weekend that was unfortunately cancelled due to the death of one of the hostesses' grandmothers. Based on a positive experience with succotash at Rooster's Uptown in Charlotte, NC (my Yelp review), I had planned to bring succotash to share and ended up re-purposing it as a side dish to some grilled veggie wraps inspired by this crepe meal (click for FrDrDr recipe). Not knowing who all would attend, I had chosen to make a vegan version that everyone could enjoy. 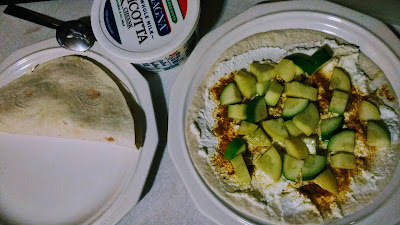 Main dish: zucchini and squash sauteed with oil and salt,
then served on tortillas with ricotta and mixed Turkish spices.

Over at Idiomation, Elyse Bruce explains that "succotash" is a portmanteau of the Narragansett words for the ingredients of the dish: manusqussedash (beans) + misickquatash (ear of corn) + asquutasquash (squash). Its first known use is in a New England diary in 1751. The mixture didn't suffer for another century, until Victorian sensibilities turned religious curses like "Christ" into "crikey" and "Suffering Savior" into "suffering succotash."

1. Cook edamame in a large saucepan of lightly salted water until tender, about 4 minutes or according to package directions. Drain well.
2. Heat oil in a large nonstick skillet over medium heat. Add bell pepper, onion and garlic; cook, stirring frequently, until vegetables start to soften, about 2 minutes. Stir in corn, wine (or water) and the edamame; cook, stirring frequently, for 4 minutes. Remove from the heat. Stir in vinegar, parsley, basil, salt and pepper. Serve immediately.

Make Ahead Tip: Cover and refrigerate for up to 2 days. Ingredient Note: Edamame are easy to digest and are exceptionally high in protein ( ½ cup has 16 grams). There are several kinds available today—frozen and fresh, in the pod and shelled—in large supermarkets, natural-foods stores or Asian markets. 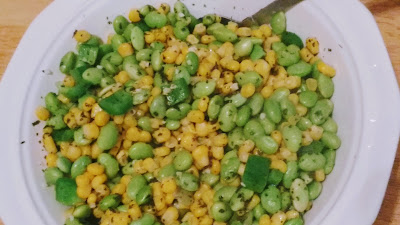 Unfortunately, I was underwhelmed by the finished product. My biggest complaint was that it was too watery. If I were to make this again, I would skip the white wine/water and splurge for the red bell pepper instead of the cheaper green that didn't stand out as well against the edamame. Perhaps if I had had some onion it would have punched up the flavor. As some commenters had remarked on the original online recipe, this dish is better cold.

Posted by Kristen Ann Ehrenberger at 6:22 PM No comments: 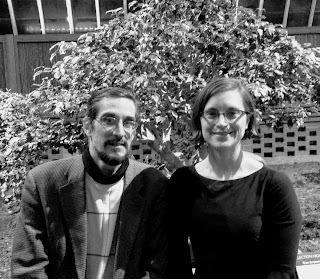 Dear Husband and I celebrated Valentine's Day this year by taking ourselves out to the Phipps Botanical Garden for their Bonsai and Orchid Display. The displays are always artful and even interesting to look at with the nighttime lighting (see our first visit there for Halloween), but it can make photographing them a challenge. For instance, a kind stranger took the shot of us to the left, but it is a little blurry, and with the odd shadows, I decided it looked better in black and white ("Vogue" filter on Google Photos). The next few photographs demonstrate the variety of the plants and artwork, from the stunning orchids "exploding" like fireworks from the hanging balls to our favorite little glowing men in the orchid and bromeliad room, an entire pyramid of orchids and the luscious colors of the plants themselves. 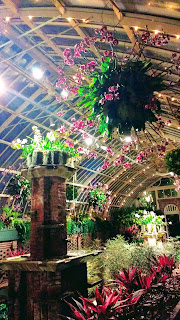 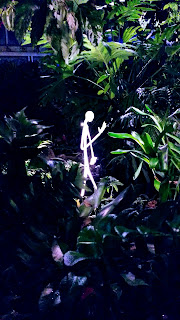 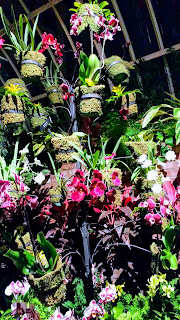 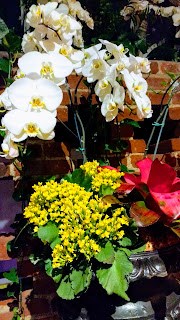 The central room of the conservatory always gets a special diorama, whether a throwback Pittsburgh railroad scene or a haunted pirate scene. If you look closely, you can see the pirate captain making his get away while a sea monster engulfs his ship! This is why we continue coming back season after season. 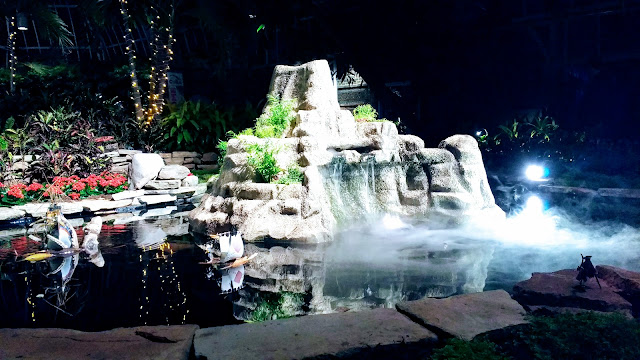 The theme of the exhibition was a good one for Valentine's Day: both orchids and bonsai take a lot of patience to nurture, just like relationships: a little water, a little trimming, the right amount of sun. I'd like to think that over time, DH and I have grown together, molding ourselves into better versions of us as individuals, and coming together as a couple to make something more beautiful. But never static. We have to keep working on "us," whether it's silly little texts during a long day apart, running errands together as an excuse to spend a little more time together, or setting up dates like this to look forward to and to reflect on afterward. (Sometimes even months later, as I went through old photos!)
Posted by Kristen Ann Ehrenberger at 10:29 PM No comments: 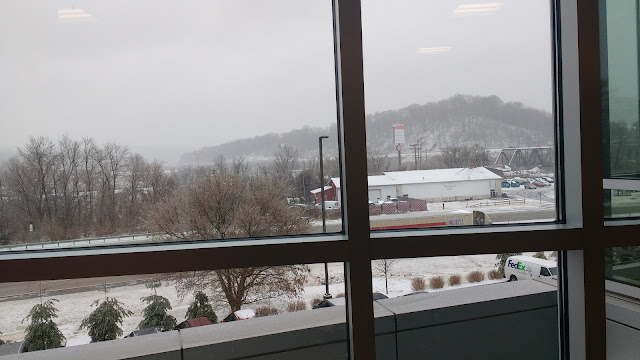 Sometimes residency looks like the view from a clinic window on a snowy winter day when schools are closed and you wonder if any of your patients will show up for their appointments (and whether their parents should be driving in this weather at all).

Newer
Posted by Kristen Ann Ehrenberger at 11:40 AM No comments:

Before Dear Husband and I got married in 2005, friends and family threw me a surprise bridal shower disguised as a surprise birthday for DH. It was fantastic. Guests had been asked to bring me copies of their favorite recipes. I'm sorry to say most of the cards have never been smudged with flour or spattered with oil, as DH and I largely either cooked dishes with which we were already familiar, or else looked up recipes online to fit ingredients we had. For most of our marriage, we shared cooking duties 50/50, each of us typically preparing one large meal per week so we could alternate leftovers. For the first 1.5 years of residency, however, I was lucky to come home to eat dinner with DH, never mind make it for the both of us. Now that my schedule has lightened up somewhat, I've made a New Year's resolution to cook more from my collection of recipes, both cards and books. Tonight DH chose a low-fat, vegetarian Tortilla-Black Bean Casserole an old family friend had gifted me. 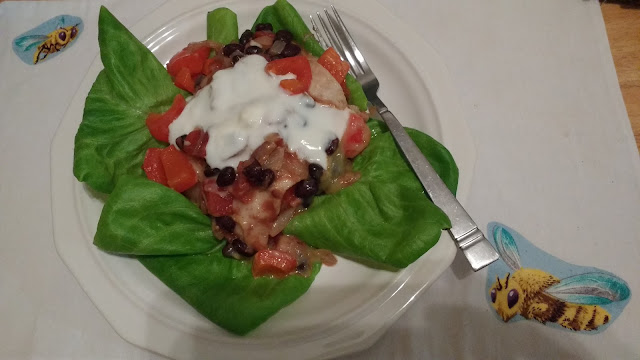 1. Sign on to Xfinity in time for the start of a M*A*S*H marathon. Discover you forgot to purchase tortillas at the grocery store; send faithful spouse to Walgreens to get some.

2. Chop 1 large onion and 2 cloves of garlic while some oil heats in a large skillet. Next time make the pieces of onion larger.

3. Heat oven to 350 degrees. Saute onion, garlic, 1 can undrained tomatoes, and 2 tsp cumin in the oil. Unsure what picante sauce is, substitute some red pepper flakes.

5. Spread 1/3 of the bean mixture + bell pepper in a 3-quart dish. Top with tortillas (either six 6-inch or 2 8-inch tortillas). Sprinkle 1 cup of shredded Monterrey Jack cheese. Spread another 1/3 of the bean + pepper mixture, then more tortillas, then the last 1/3 of the beans + peppers.

7. You can top with shredded lettuce, tomato, green onion, and olives, but we served it on a bed of lettuce with plain yogurt (or sour cream) on top. Makes 6 hot, gooey servings. Would pair well with tortilla chips and guacamole.

Posted by Kristen Ann Ehrenberger at 7:32 PM No comments:

Email ThisBlogThis!Share to TwitterShare to FacebookShare to Pinterest
Labels: food, memory, recipe
Newer Posts Older Posts Home
Subscribe to: Posts (Atom)
The blog title names my three main roles and goals in life: as a woman/wife (Frau), as a PhD in German history (Doktor), and as a future complex care specialist (Doctor). I write these posts to amuse myself. If they amuse you, too, please leave a comment!