One afternoon during our visit, "the girls" dressed up and went to tea at the Arboretum. This is one of Grandmother's favorite things to do. She first took me when I came on a solo visit when as a kid, and it was just as fancy as I remembered it. There were three courses (soup, sandwiches, dessert) and three kinds of tea. Afterwards we visited the special exhibition next door of every kind of angel: glass angels, metal angels, porcelain angels, fabric angels, shell angels, beaded angels, wooden angels, lace angels.... The restaurant and mansion were sumptuously decorated with green garlands, wide ribbons, large ornaments, and strings of crystal. What a treat! 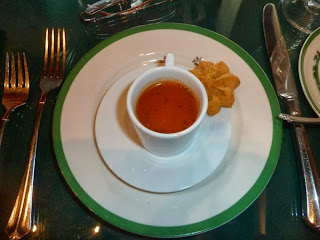 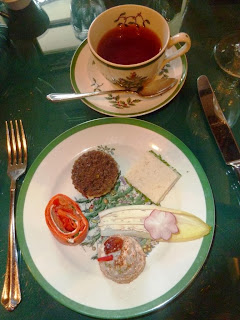 Second Course: Tea Sandwiches. Served with Peach Cinnamon Hibiscus Tea.
The Smoked Salmon Pinwheels and Open-Faced Chicken Salad were favorites around the table.
The china was Spode with a Christmas tree, which you can just see through the finger sandwiches. 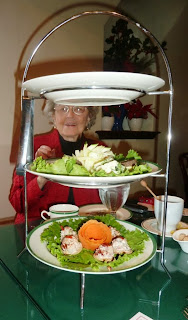 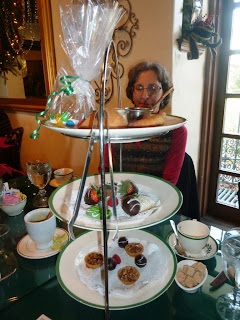 Third Course: Desserts. Served with Darjeeling Tea.
On the left, Grandmother admires the sandwich pyramid. On the right, Mother and the desserts.
Cousin E liked the Chocolate-Covered Strawberries best. There were also cookies, truffles, and scones with strawberry jam and clotted cream ("sugar and fat" according to Aunt J ;-). We took the cellophane-wrapped Gingerbread House home with us.


One day of our holiday trip was sunny and fine, so a group of us drove out to the shooting range. Dad had given the cousins a gun safety lesson at home, so after watching an introductory video at the shop, we were ready to hit the targets with a variety of handguns. The kids got pretty good from 5 yards. I was so proud of them for trying this new and intimidating activity. We might make recreational shooters out of them yet... I mostly shot my uncle's Czech police pistol at 25 yards. My best shot was the second one I took at this Ace of Hearts, direct to the right atrium. BAM! I also tried my aunt's 6-shooter revolver. Not sure if I actually hit the target with that one: it's got quite the kick, as you can see in the last photo. 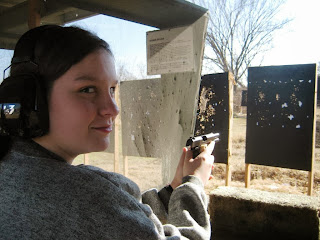 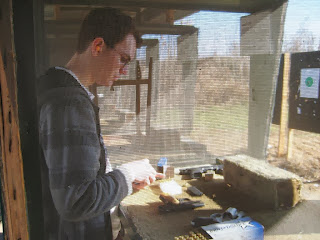 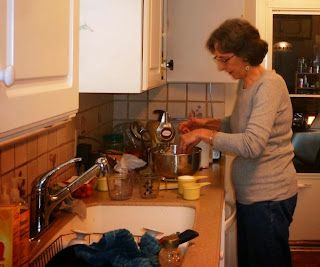 Dear Husband and I celebrated Christmas with my father's side of the family. We drove over the plains and flew over the woods to get to Grandmother's house. There we met cousins, aunts/uncles, my parents, and my younger brother. I had finished the chapter I was editing on Christmas Eve, so for the first time since September, I had no dissertation work that *had* to be done. Instead, I practiced both domestic and defensive arts, played cards, watched movies, talked, and ate, ate, ate.

With so many of us descending on Grandmother's house, I didn't want her to go out of her way getting cooking or baking. I mean, guests are cheap, indentured labor for the duration of their stay! So I volunteered to head the baking detail with my mother. She had offered to make her yeasty Christmas bread, so I suggested sugar cookies, figuring the cousins could decorate them together. Then somebody requested "something chocolate," and somebody mentioned the way rum balls help you survive family gatherings, and suddenly we had quite the list. In addition to 4 dozen sugar cookies, I decided to make cocoa rum balls (a two-fer!) and paleo snickerdoodles for my dad. One aunt and uncle provided the cookie cutters and decorating supplies, so we went to town. 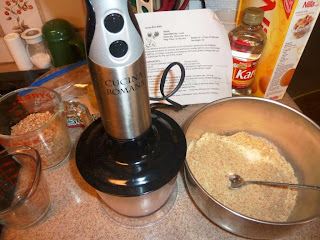 Commenters on the online cocoa rum ball recipe said they tasted too strongly of alcohol, so I halved the light rum and added orange juice. The base is vanilla wafers moistened with syrup. For nuts I used Grandmother's immersion blender (above) to pulverize pecans for a true Texas delight. I rolled them in gold sprinkles to give them an expensive look (below). They were a big hit! 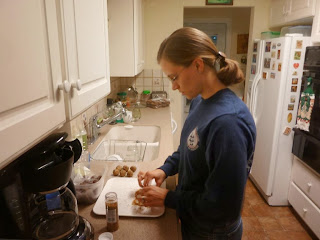 The paleo snickerdoodles were tricky. Made out of almond flour, coconut oil, and honey, they have no wheat, eggs, or butter. This batch turned out sweet but dry. Dad says he might have to tinker with the recipe to add some applesauce for moisture. (Photo: Mom using Grandmother's stand mixer.) 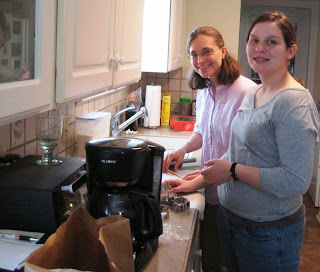 Finally, sugar cookies, which never fail to delight. In addition to the reindeer, snowmen, stars, and Christmas tree shapes, I showed my cousin how to roll out snakes of dough from the scraps and twist them into candy canes and wreaths. There are some at the bottom of second photo above. If you have food coloring, you can make them green or red as appropriate.

Meanwhile, the menfolk caught up on their shuteye...
Posted by Kristen Ann Ehrenberger at 8:21 PM No comments: 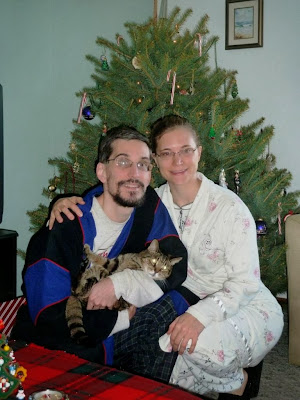 
p.s.--I loved choosing and wrapping presents and couldn't resist sharing two of them with you. 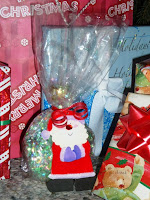 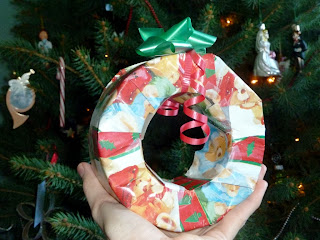 That is one jolly Santa Claus! He's bringing my grandparents a flask of a delicious amber liquid. Wonder what it could be...?

And it looks like my Father-in-Law is getting that miniature Hadron Collider he asked for!
Posted by Kristen Ann Ehrenberger at 11:44 PM No comments: 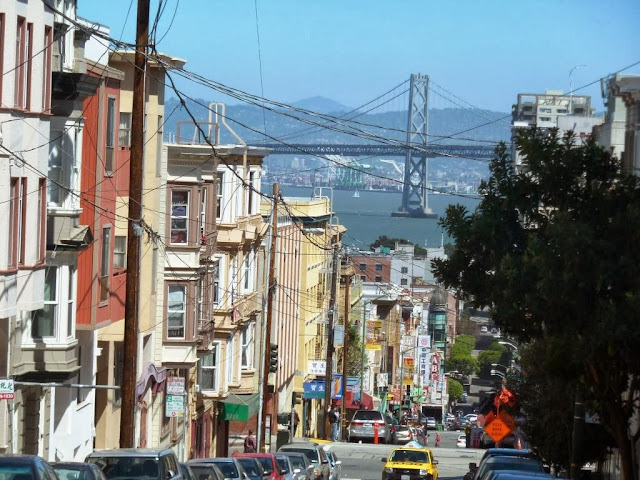 I recently participated in a "lessons and carols"-type worship service at our church on the 2nd Sunday of Advent. In addition to choreographing and performing a dance, and liturgizing, I also did one special reading the compiler of the service had picked out. A theater professor, TM has a great ear for dramatic readings. I liked this one so much that I was surprised and sorry I hadn't come across Lawrence Ferlinghetti (1919-) while researching Bay-Area poets this spring.

Ferlinghetti is a Beat poet who wrote "wide-open" verses. He co-edited the City Lights magazine and ran the City Lights Pocket Book Shop, where Allen Ginsberg and other counter-culturalists met. Before settling in San Francisco, Ferlinghetti had a peripatetic life, from New York to France to Mount Hermon (!) to UNC to the US Navy to Columbia University. He earned a doctoral degree from the University of Paris in 1951.

"Christ Climbed Down" is from his extraordinarily successful 1968 volume, A Coney Island Life of the Mind. With the exception of the dated reference to "tinfoil Christmas trees" (remember the Charlie Brown Christmas special?!), it is still timely for us during Advent 2013.

Email ThisBlogThis!Share to TwitterShare to FacebookShare to Pinterest
Labels: Christmas, holiday, poetry, Weihnachten
Newer Posts Older Posts Home
Subscribe to: Posts (Atom)
The blog title names my three main roles and goals in life: as a woman/wife (Frau), as a PhD in German history (Doktor), and as a future complex care specialist (Doctor). I write these posts to amuse myself. If they amuse you, too, please leave a comment!