Because sometimes writing really is a matter of cut and paste/tape/staple: 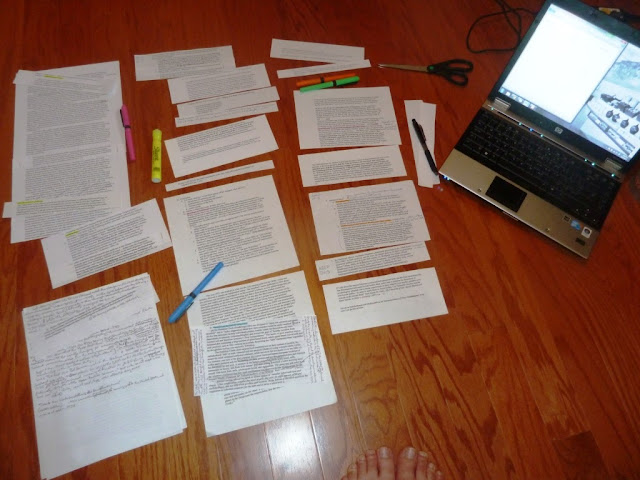 This is what the conclusion of my dissertation looked like on a recent afternoon. I have since scribbled three more pages of handwritten paragraphs. The document open on my laptop is still blank.

When I took this picture I don't remember noticing that my feet were in the frame, so I must not have been wearing my glasses. However, they are not among the objects scattered on the floor, so I'm not entirely sure where they were while I was engaged in this activity. That empty spot on the floor is for me.


Editor's note: I have been too busy cooking up fun, recuperating from it, and immersing myself in work to make up for my lack of productivity while traveling/recovering to write anything to post to this blog. I have a few hours this evening in which to rectify the situation, so email subscribers don't be surprised if you receive some back-dated posts over the next week or so.
Posted by Kristen Ann Ehrenberger at 9:03 PM 1 comment:

Upon my return from Germany, Dear Husband had an excellent idea for dinner: "chef salad." He had planned the week's menus so that I wouldn't have to cook while I was getting over the jetlag, and because our local farmers market offers so much wonderful produce--and then a friend had a bumper crop of garden lettuce--I have continued to include it in our rotation of meals for the summer. Now, the typical chef salad contains hard-boiled egg, meats like ham, cheeses like cheddar, and some veggies. In our household the term "chef salad" encompasses any entree salad, preferably although not always containing at least two of the classic ingredients. The really nice thing about our "chef salad" recipe is that the concept is so flexible: greens + toppings + protein + grain. The kinds we make tend to involve quite a bit of prep, so we usually fix these together. Here is a representative sampling: 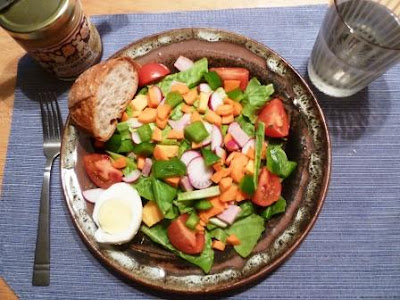 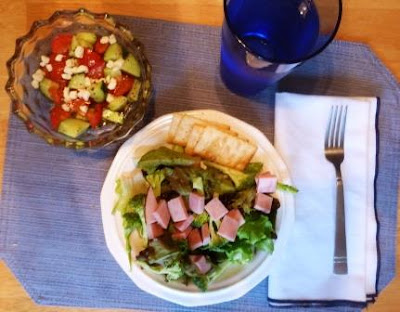 lettuce, tomato, green pepper, carrot, radish, cheddar cheese, half a hard-boiled egg each, and a piece of French baguette


You can see my favorite mustard: 3 Monkeys sweet and spicy, which we discovered on our anniversary trip to Madison, WI, last summer.


This salad comes with a salad!


(Sorry the photo is so blurry--I must have been in a hurry to eat!) 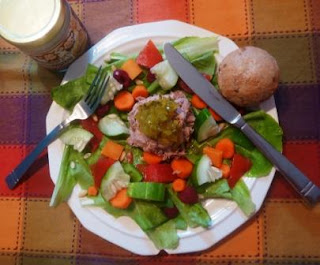 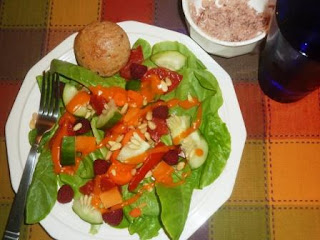 Next we have two variations of the same salad, because DH wanted to keep his tuna fish separate:

lettuce, tomato, carrots, cucumber, cheese, raspberries, pine nuts, whole-wheat roll, tuna fish drained and mixed with mayo and (in my instance) topped with sweet relish, because there is no other way to enjoy tuna fish


The cat was happy because he got to lick the extra tuna fish from my finger twice!


I generally don't use salad dressing, but I thought the French dressing on DH's salad made for a lovely combination of reds and oranges.

Instead of mustard, he ate his roll with raspberry jam (not pictured).


With chef salad, everybody can have his or her favorite condiments. Other popular toppings include grapes, blueberries, walnuts, strawberries, almonds, and sweet or dill pickles.

What do you like to put on your "chef salad"?
Posted by Kristen Ann Ehrenberger at 10:53 PM No comments: 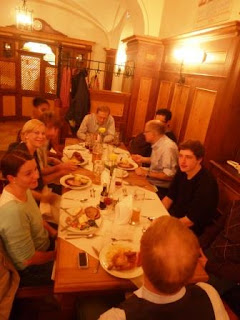 ...eat like the Bavarians do. At least, that is what the menu at the Hofbräuhaus in Munich promises tourists from in- and outside the country. I visited once with my family back in 2000 but don't remember anything except my parents drinking beer. I got another chance to appreciate this "cultural landmark" after the graduate-student German history conference I attended at the end of May/beginning of June. While an oom-pa-pa band led drinking songs downstairs, our group had two tables reserved upstairs, where it was quiet enough to hold (bi-lingual) conversations with one another.

Although we had a special, limited menu, I found myself overwhelmed by the choices. It all looked so good! Knowing the size of the entrees was likely to be bigger than anything I could eat on my own (and travel made leftovers impractical), I eventually opted to have two appetizers and share a dessert. A nice glass of white wine rounded out this three-course meal. (Ich trinke kein Bier.)

First up, soup. I chose the "beef broth with large house-made liver dumpling." I wish I had thought to take a "before" picture, because the dumpling really was the largest ball of meat I have even seen. It was savory, delicious, and soon all gone. 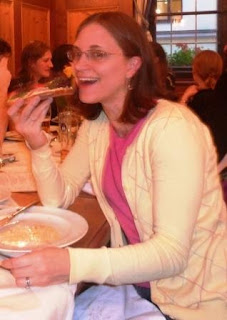 Next was a cheese course of something I had never heard of before: Obatzda. This typical Central European biergarten food is a mixture of soft cheese, butter, and spices like paprika and cumin. Served with two slices of bread, onions, and a garnish of lettuce, it was almost too rich for me to eat by myself. Here I am, cheesing it up for the camera.

Despite the copious amounts of food and alcohol being consumed around the table, one of the conference organizers thought we would be able to polish off an order of Kaiserschmarrn, a sort of chopped up pancake served with powdered sugar and applesauce. Despite the promise of an "authentic" Bavarian experience, however, this dish originated next door, with Kaiser Franz Josef (1830–1916) of Austria!
Posted by Kristen Ann Ehrenberger at 8:15 AM No comments: 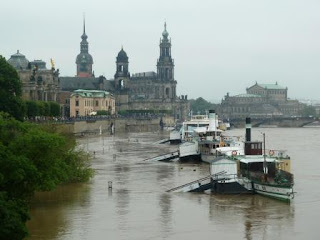 In August 2002 I was finishing two months of language summer school at the Goethe Institut in Göttingen in the center of Germany. I hadn't expected the summer to be so cool and wet and ended up wearing the same pair of blue jeans and a gray flannel sweatshirt borrowed from a classmate pretty much the whole time we were there. I can still smell the rain-soaked mornings that came through the open, unscreened windows of the room I shared with a girl from Korea.

At the time, the Germans all said this was unusual weather, but when I was back in 2006 for pre-dissertation research and again in 2007 for the German Historical Institute's archive seminar and found similar weather, I wondered whether the Germans were familiar with their own summers? At any rate, those trips confirmed me in the belief that there is no time of year during which one should travel to Germany without an umbrella (ein Regenshirm).

Anyway, in Göttingen we would read the newspapers in the mornings together, and I remember seeing pictures of devastating flooding in Dresden (among other places). Wikipedia tells me that "the Elbe River reached an all-time high of 9.4 meters (30.8 feet)" during this "Millenium Flood." 30,000 people were evacuated, and there was substantial damage done to residences, businesses, and landmarks like the Semperoper theater (click both words for previous blog posts).

Supposedly it was the kind of flooding that only happens every century or so, but some of my acquaintances in Dresden think climate change means more frequent flooding. They are now worrying whether two weeks of rain will mean a situation "as bad as ten years ago" [sic], when it rained and rained, and then after the rain stopped, the water came down from the headlands, leaving destruction and "all manner of junk" in its wake.

Thus far the famous Blaues Wunder bridge has been closed since Monday for fear that at 120 years old it could not handle both high water and modern traffic. That has meant serious transportation difficulties, as the ferry upstream has of course been stopped, the nearest bridge is under construction (causing delays and detours itself), and the next bridge (die Albertbruücke) well into town. 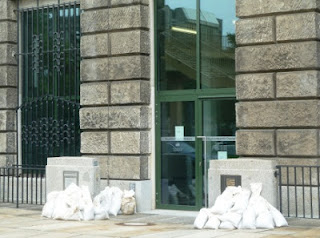 None of the more modern bridges have been closed yet, but everyone is carefully watching the official reports online. I bought some flowers for the family that hosted me for dinner tonight, and the shopkeeper said to me, "Es ist was los in Dresden." (There's something going on/happening in Dresden.) I agreed: all day sirens sounded as the fire department and army sped around town laying sandbags and erecting barriers to flooded low-lying areas. Even the Main State Archive had sandbags out front!

In fact, they've closed the archive for the rest of the week. Wednesday was supposed to be my last day, but to my complete surprise, I managed to finish what I needed to do on Tuesday. In fact, I got out a few hours "early" (i.e. before closing), so I wandered over the Carolabrücke to take photographs. Lots of locals had come out to look at the water, too.

They were still out on the bridges when I crossed the Albertbrücke at 6:15 pm on my way to dinner, and then again at 10:15 pm on my way home after Hauskreis (Bible study). There I found the scene less serene than at the other bridge earlier in the day. In the shallows, the water merely reached out wherever it could, but in the deep center of the river, the water gushed angrily around the supports of the bridge, making eddies and even some white caps. I found the noise and the sight of the speed of all that brown water angstproduzierend (alarming, fear-producing). It didn't help that the wooden foot-traffic bridge shook gently when a bicycle or jogger went by.

If you're curious what the situation looks like right now, click this link and then pick any one of the camera icons for "aktuelle" (current) images. This map is collecting data about problem areas where help is needed. These are probably better pictures than mine. Here is a graph of water levels (at 8.05 m = 26.4 ft as of this writing). This blog post shows what the Elbe River usually looks like. Editor's note: the river crested at about 8.8 m midday onThursday.

I should add that Dresden isn't the only city threatened by flooding; rivers around Germany are higher than normal. And of course, once the water passes us, it still has to pass Magdeburg and eventually Hamburg before exiting into the North Sea. Here you can see that the flooding was much worse in other parts of Germany, and in Austria and the Czech Republic.

Email ThisBlogThis!Share to TwitterShare to FacebookShare to Pinterest
Labels: Dresden, Elbe, Germany, travel
Newer Posts Older Posts Home
Subscribe to: Posts (Atom)
The blog title names my three main roles and goals in life: as a woman/wife (Frau), as a PhD in German history (Doktor), and as a future complex care specialist (Doctor). I write these posts to amuse myself. If they amuse you, too, please leave a comment!