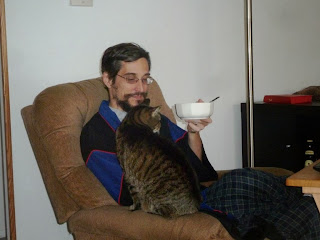 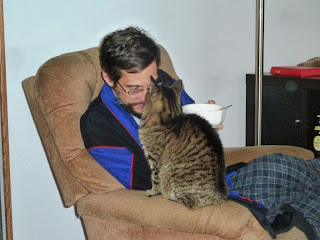 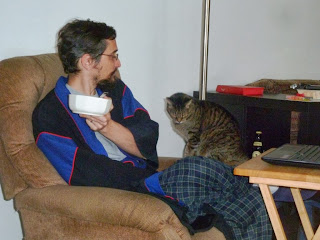 This weekend I went back to my alma mater for Dance Marathon (DM), a fundraiser for the Children's Miracle Network (CMN). A "Dance Marathon" is a big, annual event at which (mostly college) students get together to raise money from friends and family in exchange for staying on their feet a ridiculous number of hours. The largest, longest, and longest-running Dance Marathon is the 'THON at Penn State, which was started in 1973, goes for 46 hours, and raised $12 million in 2013. That money goes to Penn State Hershey Medical Center Children's Hospital. In St. Louis, DM benefits both St. Louis Children's Hospital and Cardinal Glennon Children's Hospital. Dance Marathon began at Washington University in St. Louis in 1999/2000, and at St. Louis University in 2011. There have been 15 Dance Marathons at WashU since then, because there were two in one year as the event switched over from spring to fall semester so as not to compete for participants and dollars with Relay For Life, another worthy cause.

Dance Marathon is a complicated event requiring months of planning. There are sign-up and fundraising campaigns to run, equipment to rent, teams to form, entertainment to line up, t-shirts and posters to design, supplies to buy. After dancing as a freshman (on Team Yellow, which won the Spirit Competition in 200!), I sat on the Executive Board for three years when I was an undergrad, twice as Public Relations Co-Chair, and once as the Overall Chair. As PR chair I designed campus ads in the wee hours when I couldn't study any more and painted a TON of posters to hang in the student center. As Overall Chair I coordinated an Exec. Board of about 20 other students. And every year I asked for donations. I generally find asking for money hard, but this is such a good cause. Among other things, CMN funds go toward school and tutoring services for long-term patients at St. Louis Children's, both NICU/PICUs, and the Bob Costas Cancer Center at Cardinal Glennon. CMN hospitals treat their pediatric patients regardless of their parents' ability to pay, because who can put a price tag on a child's life? 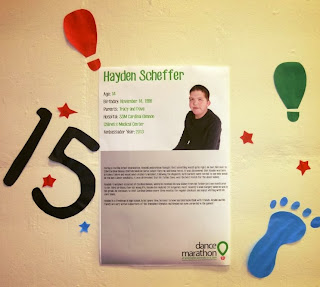 Plus, this is the kind of patient population I am hoping to work with once I get my MD. Every year there are one or two Miracle Kid "Ambassadors" who are the faces of DM. This year it was Hayden (right), who needed a kidney transplant from his dad while still an infant, and Hannah, who--having overcome bone cancer in one leg with a partial amputation and rotationplasty--was diagnosed with leukemia this spring that required lung surgery. I checked the CMN website and was relieved to recognize one of the kids listed there: Armoni was Ambadassor for my first DM and is doing just fine after a bout with lymphoma. Some Miracle Families come to Dance Marathon so their kids can share their stories and bask in the attention of dancers who want to celebrate them.

My family knows how big a part of my undergraduate experience Dance Marathon was. I mean, my wardrobe essentially consisted of a rainbow of DM tshirts. (They have since settled on green and pink as the primary color scheme.) So I was excited to be invited back as an alumna for this anniversary event: #15 for the campus, #5 for me. Luckily, I'm on fellowship this semester and was able to spend the weekend, though I didn't think my old knees could handle 12 hours (2pm-2am). So I signed up to volunteer, jumping in to help with sign-in, signage, and other early-event stuff. I did take a break in the middle to get some work done and catch a three-hour nap before returning for the big finish--and the clean up of the athletic complex. I had a hard time powering down after all that excitement, and it was the first time I had seen the hours between 1 and 5am in a long time...

The Dance Marathon itself is basically a big crazy party. Each hour has theme, complete with music and costumes. There are games and performances from dance and singing groups. And food. The "it" thing this year appeared to be pretzels (hard, soft, with warm cheese dip). Every hour the dancers learn a new section of the Spirit Dance that they all dance together at the end of the night, right before the big reveal of the total amount raised:

Watch the closing video to see what it was like. (Hint: I make a brief appearance in the conga line to the right of the frame around 1:27, I'm wearing a gray tshirt that says BELIEVE IN MIRACLES and the silvery halo of stars I acquired sometime during my last DM, in 2004.) The Chancellor and his wife have always been ardent supporters of this effort: she is the honorary chair, they make a generous donation each year, and they both come for the opening ceremonies. A more recent tradition involves them leading a dance on stage with faculty, staff, and their families. It's called "The Dancellor" (cufflinks, cufflinks, double-breasted suit), and I joined them this year for that and the conga line that followed. It was, alas, the only dancing I got to do, but it was worth it. FTK! (For The Kids!)
Posted by Kristen Ann Ehrenberger at 6:00 PM No comments: 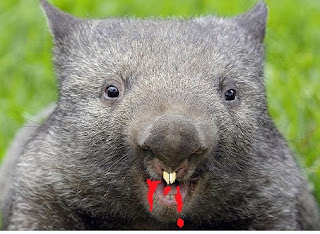 
Did you have a good Halloween? On Thursday I helped some friends with a toddler and a pre-schooler go trick-or-treating and hand out candy, and over the weekend I went to a party with grad school friends. They threw a sexy-themed party (it's  ironic, don't you get it? they're so meta!), but I went as a vampire wombat. Those don't really exist, but I discovered these big furry marsupials earlier this year and for some now-forgotten reason decided that "vampire wombat" sounded like a great Halloween costume. Mine consisted of a brown turtleneck, brown long-johns, brown socks, and black gloves (all borrowed from Dear Husband), plus a mask I made from a template I found on the internet. Apparently Australian children can learn about these animals and "play wombat," complete with burrows made out of chairs and blankets, the saw way we did with prairie dogs or badgers. I also purchased a pair of fake plastic vampire fangs and some vials of fake blood to complete the look.

My favorite part of Halloween this year was when Aang asked me to put in my fangs, and then shrieked in terror. My second favorite part was when she held my hand while trick-or-treating. Unfortunately, the fangs kind of hurt, and I couldn't talk in them. And the vial of blood I brought to the grown-up party started leaking in the plastic bag I kept the fangs in when I wasn't wearing them. When I put the vial in my mouth to try to produce the effect for a photo, the blood just filled up the fangs: I could taste it, but nobody could see it. Blech. Maybe better used alone than together.

DH even came to the party. He had a big concert weekend and so hadn't thought of a costume. Since he was still dressed from the wedding he had played, I told him he should tell folks he was an undertaker--and would be happy to take care of any bodies that might be left over after the party. He was also offering "free trial embalming." Funnily enough, no one took him up on the offer.

Email ThisBlogThis!Share to TwitterShare to FacebookShare to Pinterest
Labels: holiday
Newer Posts Older Posts Home
Subscribe to: Posts (Atom)
The blog title names my three main roles and goals in life: as a woman/wife (Frau), as a PhD in German history (Doktor), and as a future complex care specialist (Doctor). I write these posts to amuse myself. If they amuse you, too, please leave a comment!