What Residency Looks Like L: Christmas in the Hospital 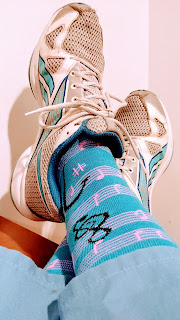 Sometimes residency looks like Christmas night shifts at the children's hospital. Nobody wants to spend the holidays in the hospital, least of all parents and their kids, so everybody goes out of their way to make the experience less taxing and more cheerful. For instance, the lobbies, bulletin boards, and nursing stations are all decorated. Many staff are wearing red and green, Christmas scrubs, santa hats, reindeer antlers, or jingle bells. Remember the discarded sweater I found while cleaning my workroom a couple weeks ago? (Here's a refresher.) I've decorated it with "ugly sweater" pins: a wreath, stocking, Christmas tree, and snowman. My socks were a present from my dad. (Hi, Dad!) Finally, the cafeteria cooked a full holiday dinner: turkey and ham, mashed potatoes and gravy, stuffing, and carrots. (The green beans were boiled well past edibility, so I passed on those.) When I tried to pay for it with meal cards, the cashier waved me off with a family coupon. Now I'm listening to Dear Husband's Pianonoise Christmas Radio program while monitoring my patients and reading a book on the history of spirometry and race. When I get off in a couple of nights, DH will drive us to visit his family to celebrate. Merry Christmas! 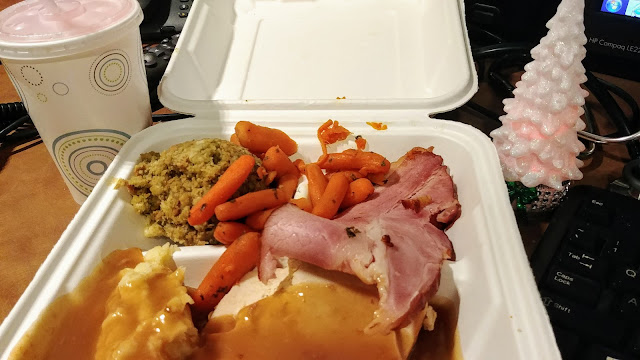 Posted by Kristen Ann Ehrenberger at 10:17 PM No comments:

What I got for Xmas this year: TIXXX 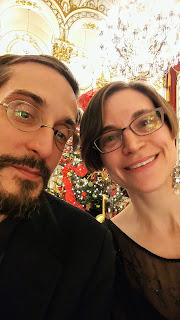 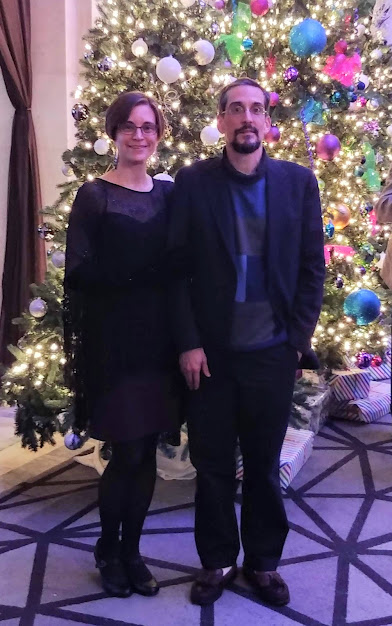 Tickets #1: Dear Husband and I treated ourselves to a fancy dinner and then a show at Heinz Hall: Händel's Messiah. The Mendelssohn Choir and the Pittsburgh Symphony Orchestra have been performing this work together for years, and it shows. I teared up a couple of times before intermission from the beauty of the music. Some of the conductor's choices of what to leave in and what to cut were a little eccentric, but we really enjoyed the whole production, and especially the counter-tenor who sung the alto parts so effortlessly.

Tickets #2: The next week we treated ourselves to Randy Rainbow's first touring show. He sang along to some of his videos, took questions from the audience, and then released his latest comedic mashup. It was okay, but I've already watched most if not all of his YouTube videos. I was hoping to hear him sing something else--Broadway, maybe--while others in the audience laughed (again) at the jokes. It wasn't amazing, but I'm not sorry we went.

Tickets #3: The next weekend we extended our range to John Waters' "Holier & Dirtier," a stand-up routine hosted in Pittsburgh by the Andy Warhol Museum. Apparently he's been touring for a couple of years and always stops here. Acquaintances of ours happened to be seated across the hall from each other, and they had attended the first two years, but the jokes were too similar, so they waited a couple years to buy tickets again. It was definitely R-rated and sometimes offensive content, but now we can say we've seen this Baltimore icon in person.
Posted by Kristen Ann Ehrenberger at 4:43 PM No comments: 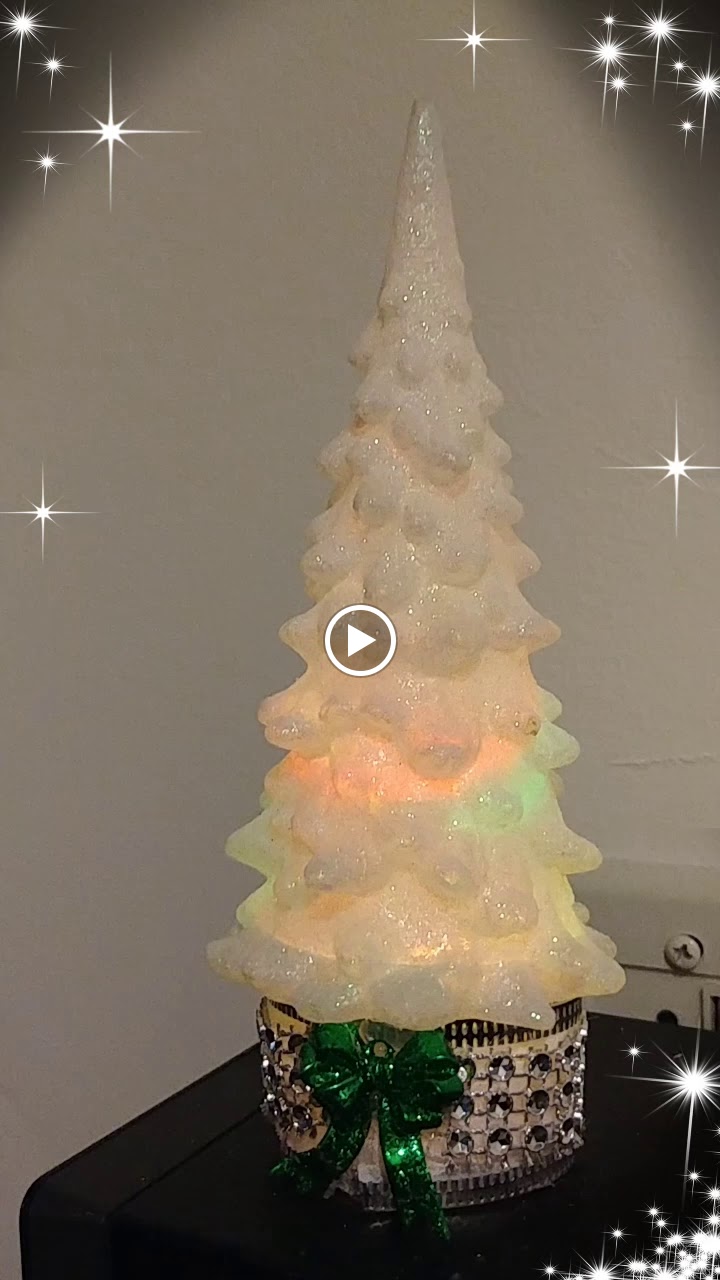 Sometimes residency looks like a little plastic tree perched on a computer tower in a hospital workroom that glows and changes colors to the strains of instrumental holiday music, bringing a little cheer to an overnight shift.

Editor's Note: Back in the same workroom two and a half weeks later, I again felt the need to sacrifice innumberable bleach wipes to my desire not to contract acute gastroenteritis from the counter or keyboard.
Posted by Kristen Ann Ehrenberger at 12:35 AM No comments: 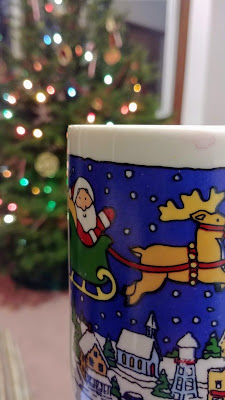 Dear Husband (DH) and I cut down a Christmas tree every year. We like the way they look and smell, it supports a local business, and the jaunt has become a tradition in our household. Intern year I found us a family-run farm not too far from the city. I think we had a good experience. Second year I nearly lost my cell phone in the university gym beforehand, causing us to start late and arrive at dusk, in the freezing rain. We opted for a pre-cut tree at the same farm that time. This year was supposed to be different but may have been worse, because we again got started late, and while waiting for DH to return from the gas station with the cash needed to pay for the tree that I had cut down in the dark by myself, the proprietor mentioned that his son sources "their" pre-cut trees from another farm--and, presumably, marks them up 200%. I decided we won't be back, as they're already making enough money to put an addition on their home. Although we will miss the fun of tramping around to pick out the tree, next year I think we'll buy a cheaper one closer to town that benefits a Scout troop or our co-op grocery store.


Things lost during this tree-hunting trip: time, daylight, us (missed a turn), patience, the teamwork experience of sawing together, our naivete about pre-cut trees, an earring.

When we finally got the tree home, we put on Haendel's Messiah while we set it up in the bay window in our upstairs front room, where our comfy chairs and laptops are. Unsure how our new cat Rosie "The Huntress" would handle having a live tree in her space, we decided only to hang unbreakable ornaments. With plenty made of wood, yarn, straw, plastic, cloth, and beads--plus lights, garland, and a dozen candy canes--it is a very festive addition to our study. The tree is still standing, and we enjoy it every night with a steaming mug of our favorite hot beverages. Merry Christmas!

Editor's Note: You might appreciate this entry from the Were We Ever That Young? machine.
Posted by Kristen Ann Ehrenberger at 9:36 PM No comments: 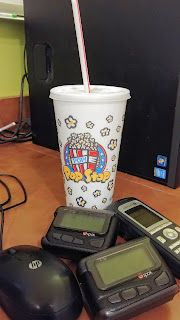 ...lunch is a large chocolate milkshake because these electronic devices keep you so busy you don't make it to lunch/lecture, where the interns are eating/learning.

Posted by Kristen Ann Ehrenberger at 1:30 PM No comments: 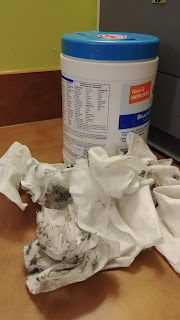 ...if before the end of your first long call, you bust out a pair of gloves and a canister of anti-septic wipes to clean the workroom. Yield: one pair of scissors, 4 unclaimed water bottles, 38 cents in loose change, 3 spare pager batteries, one chunky sweater, 3 staplers, an old meal ticket, and an inch of papers left over from old patients and residents.

When Dear Husband and Frau Doktor Doctor tied the knot more than a decade ago, they agreed to share the cooking duties 50/50. Neither having the energy to create a new meal from scratch every night, they developed the habit of cooking one large batch per week each and then enjoying the leftovers. Then cancer and intern year happened, and one or the other of them took over 100% of the kitchen duties. This weekend FrDrDr decided to (re)apply herself in the kitchen preparing one old dish and one new one: lentil loaf and carrot souffle, with a side of fresh spinach. What followed was predictably unpredictable, a comedy of errors. (See also Halloween 2017 and, especially, Canadian meat pie.) You can follow along in ten eleven easy steps! 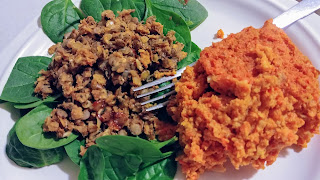 1. While writing your shopping list, discover that you can no longer find the blog post with your lentil loaf recipe. Search the internet for it in vain. Discover another copy in your college cookbook.

2. Back from the grocery store, pull up a movie to watch. Pre-heat the oven to 350 degrees and butter a 2-quart dish.

3. Wash, peel, and chop the 2lbs of carrots narrower than the recipe suggests. Boil for three times as long as recommended to finally soften them. Realize the oven doesn't need to be on yet; turn it off.

4. Meanwhile, pour 1 cup milk, grate 3/4 cup cheese, mince 1/3 cup onion, and measure 1 cup of bread crumbs instead of saltine crackers, which you haven't kept in the house since the time you had gastroenteritis and discovered an entire box infested with stored product pests.

5. Also in the meanwhile, realize you should start boiling 1 cup of lentils so that the dishes will come out of the oven at the same time. Turn on oven again.

6. Strain the carrots and puree in a little food processor a little at a time. Add 1 tablespoon butter to the mixture. Laugh when the recipe reminds you to "whisk" the milk into the puree. Realize belatedly that if you had included even a tablespoon of the boiling water, the carrots might have at least started out smooth.

7. Add cheese, onion, some salt, 1/4 teaspoon mixed Turkish spice (no cayenne), and 1/4 teaspoon black pepper. Give up on the whisk entirely when you get to the part about whisking three frothy eggs into the batch. A spoon does the trick nicely. Pop in oven to bake for 45 minutes until it just starts to pull away from the sides of the dish.

8. Meanwhile, dish out some of the lentils to be mashed. Mix with 1 cup oats, 1 egg, 1/3 cup ketchup, 1/3 cup BBQ sauce, and some onion. Forget the celery in the jar of water in the fridge that you promised yourself you would use up.

9. Pat into buttered loaf pan and top with a stripe of ketchup. Wonder that the loaf looks so small. Pop into oven. Only 30 minutes until dinner!

10. While cleaning up the kitchen, discover the rest of the lentils still in the pot on the stove. Mash them, pull out the pan so you can mix them in with the rest of the as-yet unset loaf, and apply another stripe of ketchup.

11. Two hours and one feature-length movie later, remove both dishes from the oven and enjoy! 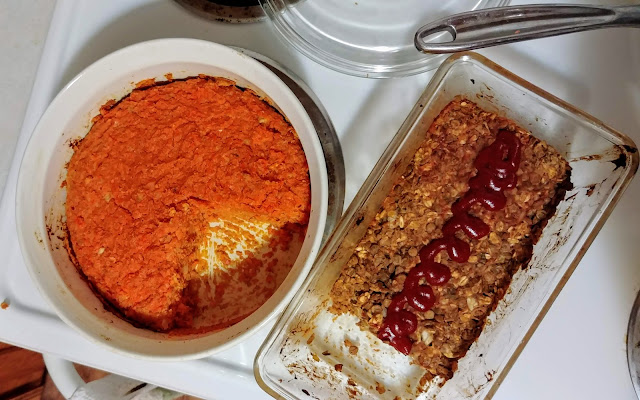 Despite increasing the sauce, the lentil loaf is STILL too dry to stick together; I may start pureeing some of the beans to encourage more cohesion. Both DH and I liked the carrot souffle, although it could have used a little kick--maybe I'll add red pepper flakes to the next batch. When the directions say one hour cook time, they must mean AFTER everything has been chopped and measured. Nevertheless, we decided this recipe is a keeper to pull out every once in a while--or when romaine lettuce has been exiled for yet another health scare.


Editor's Note: If you liked these recipes, you might also enjoy this easy party recipe or this versatile main dish.
Posted by Kristen Ann Ehrenberger at 9:02 PM No comments:

Email ThisBlogThis!Share to TwitterShare to FacebookShare to Pinterest
Labels: food, humor, recipe
Newer Posts Older Posts Home
Subscribe to: Posts (Atom)
The blog title names my three main roles and goals in life: as a woman/wife (Frau), as a PhD in German history (Doktor), and as a future complex care specialist (Doctor). I write these posts to amuse myself. If they amuse you, too, please leave a comment!