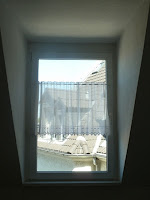 Me: Lace curtains: that’s how I know we’re in Europe.
Him: Is that all?
This exchange with Dear Husband took place in Vienna last November, but the curtains in the photo are from my kitchen in Leipzig (May). I compiled the following lists over my months in Germany as a way to remember what at first seemed different to me. In no way do they pretend to be comprehensive. These may not even be the "most important" differences between the two countries. But they are things I noticed in my daily life, and I would be interested to hear your agreements, additions, or corrections in the comments section below.

A last observation that I frequently made is that I look German but—even with my best grammar and vocabulary—as soon as I opened my mouth it became blatantly obvious that "Frau Ehrenberger" was not German. Most people I interacted with were willing to work with my sometimes limited language skills.* Only once did a complete stranger (to me; he was a friend of a friend) make fun of me. She and I were loading my things into her car after a sleepover, and I was unselfconsciously prattering away in German with my broad American accent. “Was?” he asked her in front me. “Was ist das? Ist das Deutsch?” I wanted to say to him, “Hallo! Ich verstehe Sie!” but just mumbled a “Hi.”**
By contrast, a South Korean artist I met outside Dresden (who had good English from having studied in Boulder, CO), noted that she was stared at in her small town outside Munich. She was often the first Asian these people had ever seen. But some neighbors had taken her under their wing and regularly invited her over to drink beer and learn Bayrisch. So even though she didn’t look German, she often impressed shopkeepers by speaking in the local dialect!
Certainly much of my experience in Germany was filtered through my language skills, what I could or could not understand, what I could or could not express. Being in an English-language environment is my favorite part about being back in the United States. Okay, maybe my second favorite part, after having DH around all the time. And so it seems mete to publish this final missive from/about Germany a year after the above exchange about the foreign-ness of Europe being manifested in its curtains took place. In the title of this post I call Germany "now a familiar strange place," because I feel as if I understand or recognize some of what makes our countries different (hence, "familiar")--but they are still different ("strange"). I hope you have enjoyed reading along; I know I appreciated having a creative outlet for writing and for sharing photographs. Watch this space: over the next months I may post every few weeks with some update on my dissertation research and writing; and definitely stay tuned in June 2012, as I accompany DH on a choir trip to Central Europe. We'll post more stories and photos for you!

*--My German definitely improved, but the variety of topics I encountered sometimes strained my vocabulary. High-school German, for instance, does not provide one with words or phrases for church or Bible study. And my research taught me about medicine, food, and even agriculture but not always what I needed for discussing current American economics or politics, which were popular topics with acquaintances.

Email ThisBlogThis!Share to TwitterShare to FacebookShare to Pinterest
Labels: Germany, travel
Newer Posts Older Posts Home
Subscribe to: Posts (Atom)
The blog title names my three main roles and goals in life: as a woman/wife (Frau), as a PhD in German history (Doktor), and as a future complex care specialist (Doctor). I write these posts to amuse myself. If they amuse you, too, please leave a comment!