How We Got There 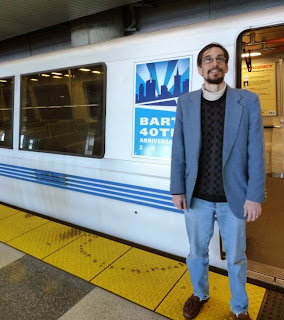 Editor's Note: I was inspired to finally get around to composing this last scheduled post from our San Francisco trip by this online article, which has Shown Clover's composite then-and-now photos of the damage caused by the 1906 San Francisco Earthquake. They're pretty neat. After reading this post, go check them out!


Left: Dear Husband was excited to ride on the BART, since he remembered reading about how terrific the Bay Area Rapid Transit was in one of his elementary-school textbooks. BART is celebrating 40 years. When it endangers its unionized workers, however, it is not so great.


San Francisco is a public-transit dream or nightmare, depending on your tolerance for multiple tickets, lines, maps, time tables, etc. My dread began while I started researching our hotel and how to get around town when we weren't doing conference things. There's the light rail (BART), Muni buses and subways, cable cars, and the Market Street railway (streetcars). A Germanist accustomed to user-friendly public transit, all I wanted was a comprehensive map. None was to be had. The website 511.org claimed to show all the options, but it must have been designed in about 1996 and has terribly un-user-friendly maps. Google Maps has all the stops but none of the lines indicated!

The joy continued once we were on the ground. We bought cable car tickets with a friend (who was dragging a rolling suitcase) and literally ran around Hallidie Plaza trying to figure out which stop we were supposed to be waiting at. The ride to the waterfront itself was fun, if expensive. 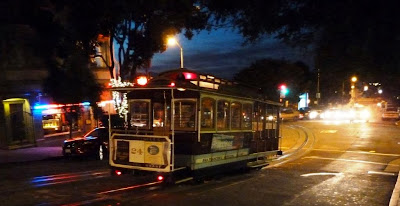 We took the F-Market streetcar home in order to ride along the Embarcado. It was such a great idea that about 100 other people had the same one, and we squeezed in together before finishing our day's journey on the Muni subway the last few stops. I don't have any photos of the subway, just the streetcar: 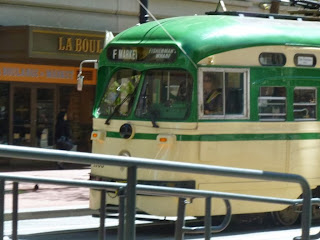 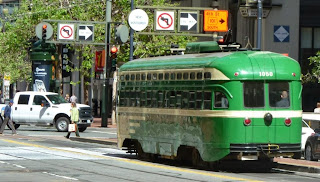 Another day we wanted to a take the bus, somewhere but because we were trying to pick it up on place in its route where it turned a corner, and we couldn't figure out which direction we were facing, we ended up missing the bus. This is one reason why I have always preferred subways. (The other is the uncertainty in strange cities about where to disembark.) DH and I did manage to successfully take two buses to the car rental place, so that was a minor triumph.

Probably the most fun we had was by car. Besides hiking in Muir Woods, the other 'bucket-list" DH had was driving down Lombard Street, the steepest street in the US of A. He fulfilled that goal in our little rental car, while I took photographs.

This concludes the scheduled posts about our trip. There is one more coming, around Christmas, since I discovered another local poet I want to feature. For you public transit fans, here are a few more pics:

Editor's Note: This is the second-to-last scheduled post from our trip to San Francisco, of the places we went. If I can find the time I will add the final post, How We Got There. 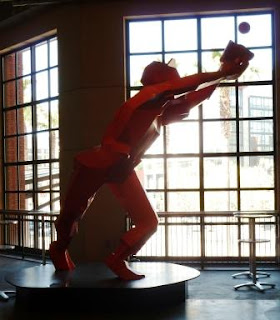 Giants Stadium: While I was at my conference, Dear Husband visited the home of the San Francisco Giants. It was something of an anti-pilgrimage, as the stadium is practically a shrine to Willie Mays (1931-). One of the reasons Mr. Mays is known as such a great baseball player is "The Catch," an awesome over-the-shoulder catch of a long fly ball during Game 1 of the 1954 World Series between the New York Giants and the Cleveland Indians at the Polo Grounds in NYC. The Giants ended up sweeping the heavily favored Indians. An Indians' fan by birth, DH holds a minor grudge against Mr. Mays. Here is a statue of the moment. (The Giants moved to 'Frisco in 1958.) 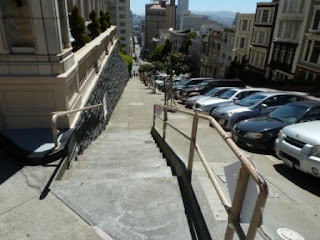 Cable Car Museum: DH also visited the barn and powerhouse for the famous historic cable cars. He got to read about their history and see the wheels that turn the cables that run underneath the streets. The cable cars have pincers underneath to grab onto the cable and be pulled along.

To get there, he had to hike up Nob Hill (right). That's the view from the top! 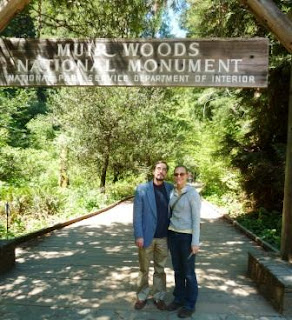 Muir Woods: This was on DH's Bucket List. We did a 4.8-mile hike in 2.25 hours along the Ocean View --> Sun Trail --> Dipsea Trail. DH took lots of pictures, and I brought alone our new What Redwoods Know to read some poems as we sat on a wooden bridge over a rivulet while the tall trees swayed and whispered in the wind high above us. Yes, it really was like that. However, there wasn't much of an ocean view, as they're doing some wildfire prevention work, and the sun trail was no joke: I came back with a lightly burned face. But we got plenty of tramping in, with occasional wildlife sightings, especially "leezards." (I think that pronunciation comes from a cartoon we watched as kids, but for the life of me I cannot remember which one.) 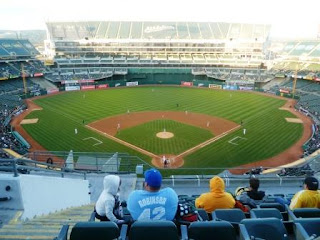 O.co Stadium/Oakland Coliseum: We have been trying to see a Giants game since we got married and wanted to honeymoon in SF, but it was not to be. So this time we took the BART across the Bay to the Coliseum, now known as O.co Stadium. Because it was Jackie Robinson Day, all the players wore a 42 on their uniforms and no names. That's okay: we wouldn't have known any of the Athletics or Astros players anyway. You can see the dad sitting in front of us was wearing 42 also.

Posted by Kristen Ann Ehrenberger at 7:32 AM No comments:

A few years ago a friend invited us to dinner and then out to a PechaKucha Night. Pronounced the way it's spelled, pe-CHA-ku-cha is Japanese for "small talk." It is an event model created in Tokyo in 2003 as a way for designers to get together and show their work: 20 images for 20 seconds each. The tradition quickly came to our area and has been going strong for 8 years already.

If you go to one, you'll see a little bit of this and a little bit of that--just like this mild bean chili DM invented. I thought the corn and parmesan cheese were strokes of genius, but I take credit for the bed of spinach. Here it is: a homey one-dish meal. 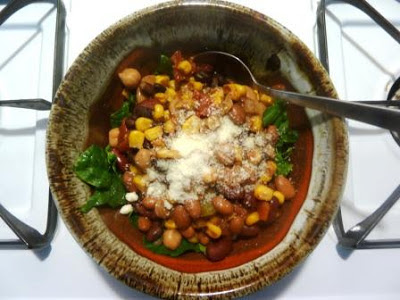 If you're still hungry, this goes well with carrot sticks, garlic bread, and/or Triskets with tahini for a little extra protein.
Posted by Kristen Ann Ehrenberger at 7:35 PM No comments:

Editor's note: I have such a backlog of "foodie photos" that I'm going to try to get some of them up here in between my usual travel or academia-themed posts. Here is Saturday's dinner--a homemade first for us--quesadillas. To fit in with our other meals (including the fact that we had ground beef burritos last week), I decided to cobble together some recipes online for "roasted vegetable quesadillas" as follows.

Meanwhile wash and chop bell peppers and zucchini. I used parts of each and ended up with a small bowlful—maybe three cups’ worth? These I also tossed in the olive oil mixture, but you could skip that step. (I wasn't sure whether I was going to saute them or not; I choose to cook them in the tortillas to prevent them from getting mushy.)

Grate cheese. (We had a cheddar from our favorite, the locally owned Cheese & Crackers).

Melt some butter in a pan and start to warm the first tortilla—flipping a few times—until it gets air bubbles. Put ¼ of potatoes and of other veggies + some cheese on one half of the tortilla, and fold closed. Let cook a few minutes—flipping once or twice—until the outside is crispy and the inside melted.

Top with guacamole and serve with refried beans and a salad. (Sour cream, too, if your household likes it.) We thought the 'dillas could have used a little more queso, but all in all, this was an extremely tasty and very filling meal. 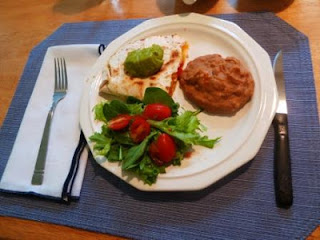 Bonus points if you use your own garden-fresh veggies or make your own guacamole or refried beans!
Posted by Kristen Ann Ehrenberger at 7:08 PM No comments:

Email ThisBlogThis!Share to TwitterShare to FacebookShare to Pinterest
Labels: food, recipe
Newer Posts Older Posts Home
Subscribe to: Posts (Atom)
The blog title names my three main roles and goals in life: as a woman/wife (Frau), as a PhD in German history (Doktor), and as a future complex care specialist (Doctor). I write these posts to amuse myself. If they amuse you, too, please leave a comment!