10. The night shift I tried to save a disposable cup by using my travel mug with a drink machine and ended up splattering hot cocoa everywhere. It looked like I had violently murdered a chocolate Easter bunny.

9. The time I set my alarm for an extra weekend shift at 6:50am, figuring this would give me a good 40 minutes to wash, dress, pack a lunch, and enjoy some pancakes before heading to the hospital with plenty of time to spare. Except I was supposed to show up no later than 7:00am. Dear Husband happened to be getting up early for church, so he woke me up at 6:30am and then helped me throw some food in a lunchbox just in time for me to run out of of the house at 6:45am. Whelp! I wish I could say that was a lone incident, but two other times I picked up extra weekend shifts, only to lock myself out of the house at 6:30am, only to have to call Dear Husband to wake him up to come let me in to get something I had forgotten (like my car keys).

8. When I diagnosed pelvic inflammatory disease in a woman who had had a hysterectomy.

7. When I accidentally walked into a construction zone because just the day before a consult patient had been on that ward. Even though there was a sign hanging on the door "authorized personnel only." I am so used to being "authorized personnel" that I entered anyway. Oops.

6. The day I let my co-resident go home thirty minutes early at the end of our otherwise quiet night shift, only to be called to a C-section for an unstable baby, parents who wanted to refuse vitamin K, a cold baby, parents who wanted to refuse erythromycin eye ointment, a baby who needed to be transferred to another hospital and could I tell the parents, a baby who needed an ultrasound (at which point one of the on-coming nurses sniped that I should have made sure the baby was already in the triage area, although nobody had ever told me this was my job), and oh by the way, this other one's blood sugar is 29, and no one knows whether the mother is okay with bottle feeding.

5. The first time I trimmed a newborn baby's umbilical cord and splattered blood everywhere, including on the nurse who was helping me.

4. When a patient asked me to rewarm her homemade heating pad of rice in a sock in the microwave for 1:30. She didn't know the setting, so I did it on HIGH--which cooked the rice and burned two holes in the sock. Not only did the floor staff wonder what was burning, but when I returned to the workroom my nightshift colleagues could still smell the smoke on my scrubs.

3. The day I complained when I didn't hear about new admissions all day until the ED attending texted my attending that they hadn't been able to get ahold of me for hours...because I had forgotten to sign in my pager that morning.

2. That night in the adult emergency room when I did a rectal exam on a patient who was concerned that his partner had left a foreign object in the patient's rectum, and then he critiqued me on my technique: "That's why girls aren't allowed back there!"

1. Once while overseeing conscious sedation of a girl in the ED getting her broken arm casted under twilight sleep, I noticed that my vision was starting to black out. While it was uncomfortable to see her arm being manipulated to get both bones back in place, maybe I had locked my knees while leaning over the gurney, or I hadn't snacked enough that night. I told the attending physician, "Jenn, I'm feeling faint." She promptly took over the sedation, sat me in a chair while someone fetched cold OJ, and forbid me to do anything else. Afterwards the Orthopedics resident smugly asked, "First sedation?" "No," I replied. "Second."

Newer
Posted by Kristen Ann Ehrenberger at 8:39 PM No comments: 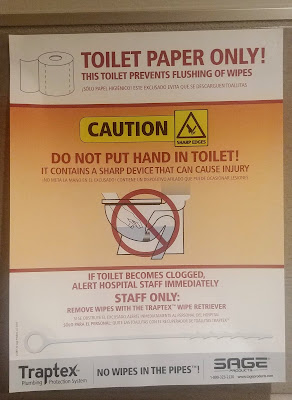 Long-time blog-readers may be familiar with my obsession with toilet and bathroom technology. So of course I snapped a picture of this sign next to a commode at the hospital where I was moonlighting.

"DO NOT PUT HAND IN TOILET!"

I could see the utility of posting such a warning in the janitor's closet, but why did they feel the need to tell the average toilet-user not to put their hand(s) in the toilet? Are toilet-induced hand injuries that common? If so, why have I never seen one in either the pediatric or the adult emergency room? The fact that somebody thought a sign was necessary suggests that these flesh-eating toilets are capable of inflicting the kind of the damage that would require an emergency room visit, rather than the kind that you swig a little alcohol, wrap in some gauze, and hope looks better in the morning.

Anyway, in case it needs to be said, keep your appendages out of the bathroom fixtures.

Newer
Posted by Kristen Ann Ehrenberger at 6:43 PM No comments:

What Residency Looks Like XLIII: I'd watch that sitcom! 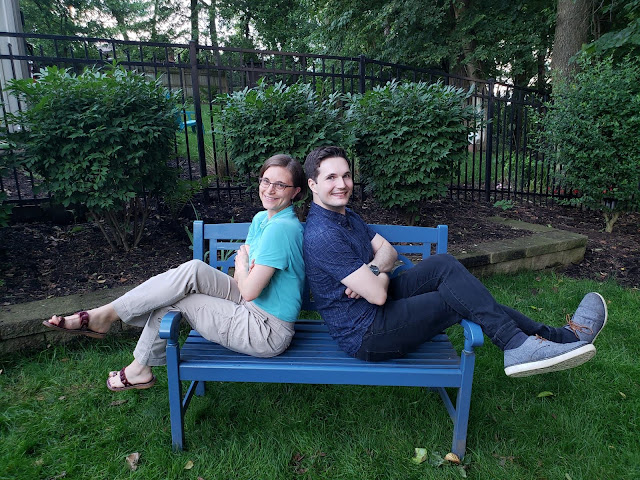 Two strangers become friends while undergoing the wacky hazing ritual that is a medical residency in the United States. Actually, there are two other trainee doctors in their cohort, but one has an evening ED shift and the other is working night shift. Typical that all four couldn't be together to celebrate the end of their third year together. Coming soon: third-year bloopers!

Newer
Posted by Kristen Ann Ehrenberger at 9:57 PM No comments:

What Residency Looks Like XLII: Cool as a Cucumber 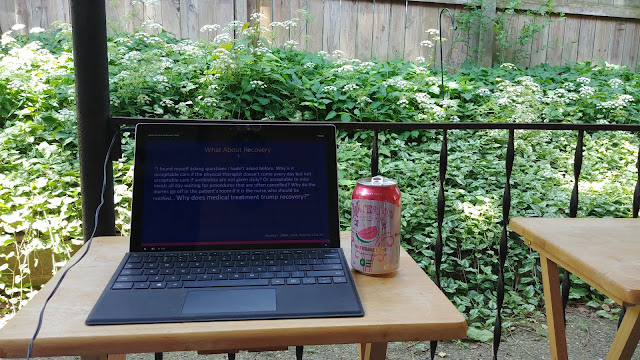 Sometimes residency looks like listening to live-streamed medical lectures from your back porch in order to enjoy the beautiful early summer day before working third shift in the pediatric emergency department. DH joined me for lunch and to read a book.

Newer
Posted by Kristen Ann Ehrenberger at 1:04 PM No comments:

Email ThisBlogThis!Share to TwitterShare to FacebookShare to Pinterest
Labels: garden, medicine, residency, WRLL
Newer Posts Older Posts Home
Subscribe to: Posts (Atom)
The blog title names my three main roles and goals in life: as a woman/wife (Frau), as a PhD in German history (Doktor), and as a future complex care specialist (Doctor). I write these posts to amuse myself. If they amuse you, too, please leave a comment!