His Castle Was His Home 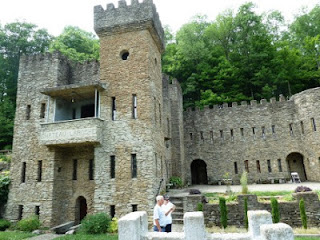 Editor's note: This is another of the posts I'm clearing out of the Draft pile.

One of the neat things we did this year was to visit the Chateau Laroche, the lifetime project of one man, who built it by hand with cement and river rocks. This American castle is a very imaginative structure, complete with great hall, dungeon, chapel, battlements, and garden. While serving as a medic in Europe during World War I, Harry Andrews decided he hated war but loved castles. He gave up women and took up architecture instead. He also founded an order of "knights" based on the principles of chivalry, Christianity, and patriotism. (The order has since started admitting women, to deal with dwindling membership.) Today, those volunteers takes care of the property. The public can visit for a small donation, Scout troops hold activities there, and it is a popular place for a small weddings. If we lived in the area, I would volunteer to work in the garden, which has a lot of unrealized potential.

Posted by Kristen Ann Ehrenberger at 8:37 AM No comments: 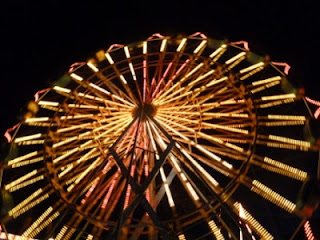 Editor's note: This post had been languishing in draft mode for several months, and since I tried to avoid work over Thanksgiving, I was able to rescue it from my list of "to do" tasks and remember a fun time from the summer.

This was finally the year Dear Husband and I made it to the County Fair, and we decided to have the whole experience. We met a friend inside among the food booths; he was buying Culler's fries: oily, salty, and hot. Then it was on to the main course. DH chose steak on a stick and  a fresh-squeezed lemonade, while I opted for a corn dog with a ridiculous amount of ketchup. We ate under the grandstand, listening to the roar of the demolition derby and shooed away some very persistent flies. Dessert was homemade strawberry ice cream for him, pineapple ice cream for me. There was nary a vegetable to be seen. Do calories fly away if you spin around fast enough? 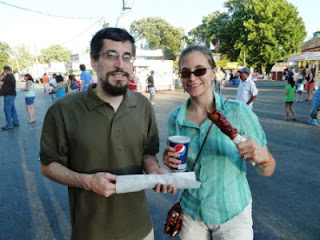 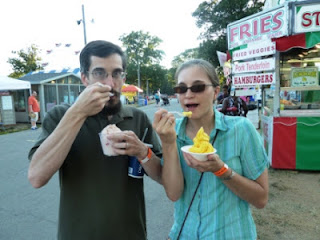 Having filled up our bellies, it was time to buy ride tickets. DH watched our bags and took photos while A.S. and I rode all the "big" rides (3 and 4 tickets). Here's a picture of us on the Predator (we're the two figures in the lower left corner). I usually laugh (or scream) on rides like that, but this one had such high Gs from the centrifugal force that it was all I could do to keep breathing. I think my face was frozen in a grin until we got down. We rode the rocking boat, too, but my favorite was the ferris wheel with the enclosed metal cages and the little steering wheel so you can rotate while you're orbiting. A.S. is stronger than me, so he "drove." Boy, that was a ton of fun. Afterwards, to settle our stomachs, we walked through the small exhibit hall. There were the requisite prizes for quilts, clothing, crops, flower arrangements, paintings, garden vegetables, and baked goods. (Our state representative won first prize in the cookie category, if I remember correctly.) We were surprised and delighted to discover that kids can submit Lego creations in their own category--and disappointed that a commercial design for Falling Water took first prize. 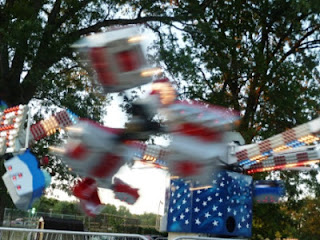 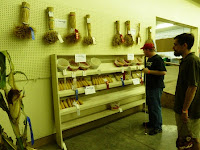 We still had a few ride tickets left, so DH and I got on the bumper cars and released some pent-up aggression at each other. Just kidding. Maybe. By 9pm or so the temperature had settled into the 70s, and the three of us shared a little funnel cake with powdered sugar and cinnamon in the pleasant night before heading home, happy. Now we can say we've been to the county fair. Next year, the state fair? 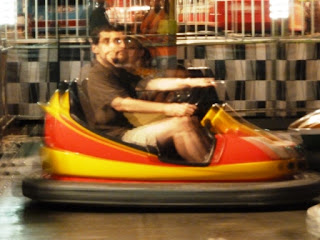 There haven't been any posts lately, because I've been studiously working. Having completed a draft of the fourth chapter of my dissertation earlier this week (it's actually going be the second chapter, when all is said and done), I am studiously avoiding work over the holiday. To celebrate, I am completing blog posts that have been languishing as drafts. Today's is a potpourri of experiences I've had with my family and friends over the last several months; there will be two more next week. I am truly grateful that I have enough health, money, and free time to enjoy life like this.

Posted by Kristen Ann Ehrenberger at 2:40 PM No comments: 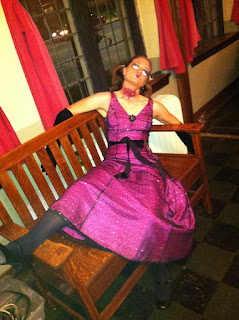 Dear Husband and I like Halloween. We're not fanatics who start planning our costumes months in advance, and we don't even get around to carving a jack-o-lantern every year. But we enjoy a good scare, creative decorations, and watching Charlie Brown's Great Pumpkin special with some candy pumpkins.

Six years ago the church and faith-based student center where we go to Bible study started a food pantry. Four or five years ago someone got the bright idea of hosting a haunted house in the big old building to raise money for the pantry. The students build sets, recruit make-up artists and actors (to play zombies, of course), and turn the whole place into a dark and bloody scene of terror. It's great. Me, I'm stingy with my time, so I just show up one night out of the three or four to do make-up and act as a hostess or tour guide. This year I decided to dress up as a murdered doll, complete with Kewpie face and latex slash on my throat. For half the night I lay crumpled in a chair before coming to life and leading the groups outside to the stairway and slide that served as the entrance to the haunted house, which began in the church's basement and boiler room. The second half of the night I crazily and creepily delivered the introduction about the food pantry (1,300 served in the month of October) and the safety rules (no cell phones, watch your pretty little head, etc.). I think the best scare on Friday was the group of middle-school boys who collectively freaked out when they came around my chair and saw me lying there.

The next night, DH and I met some friends for spooky storytelling concert at a museum on campus. (We had wanted to hear "Grimm's Grimmest" the weekend before, but we were in Indy for DH's race.) Instead, we heard an international mix of stories, from England, Thailand, the US, and Vietnam. All the storytellers are members of a local storytelling guild. My favorite story, "The Buried Moon," sounded like it had Celtic roots. I said afterward that in another life I would like to be a storyteller. Between my lectures and children's messages, I guess I sort of am, already. The experience reminded me of how my brothers and I would sometimes make ourselves beds on the floor and huddle together to read Scary Stories to Read in the Dark, collected by Alvin Schwartz and illustrated in gory detail by Stephen Gammell. Despite repeated readings, we still scared ourselves silly! I'm tickled the above link replicates some of the stories and illustrations.

Sunday evening I joined another friend at her house for a viewing of The Exorcist, which I had not seen before. It's her all-time favorite movie, one that gets better every time she watches it, because she notices some new detail or foreshadowing. I thought it started slowly but otherwise was a good watch--better than a slasher film. We're talking about watching Rosemary's Baby for our next movie night!

I finally got around to decorating the house on Monday. It had been rainy and windy here, and I figured decorating too soon was just asking for trouble. I put up the last of the glow-in-the-dark cotton for spider webs by the front door and hung a large hairy spider with some fishing line from the storm over over a hook in the eaves. When we open the door to hand out candy, the spider descends about a foot to the height of a child's head.

Speaking of decorating the house, on Saturday I helped a friend build his Lego Haunted House. I should have been working on fellowship applications or on teaching prep or on search committee business, but instead I was poring over book 3 of directions and scrounging around on cookie trays for little plastic pieces. He brought the finished house to the election-watching party we attended to show it off: complete with moving fireplace, trap door to the attic, glow-in-the-dark ghosts, and body parts under "glass" domes. 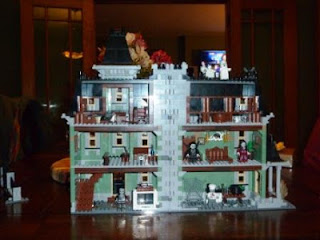 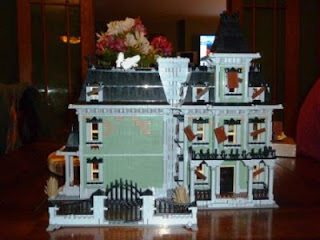 Posted by Kristen Ann Ehrenberger at 8:50 PM No comments:

Email ThisBlogThis!Share to TwitterShare to FacebookShare to Pinterest
Newer Posts Older Posts Home
Subscribe to: Posts (Atom)
The blog title names my three main roles and goals in life: as a woman/wife (Frau), as a PhD in German history (Doktor), and as a future complex care specialist (Doctor). I write these posts to amuse myself. If they amuse you, too, please leave a comment!