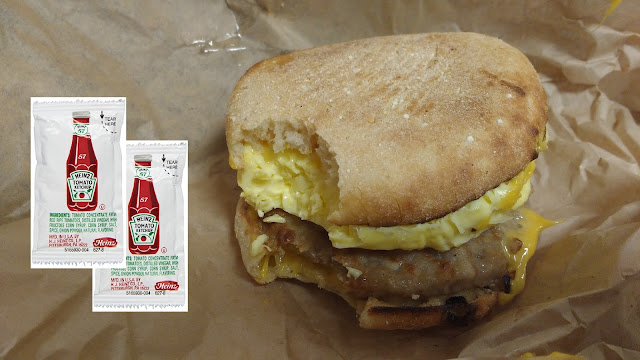 Sometimes residency looks like the breakfast sandwiches your fellow or attending buys the team after an overnight shift so that you all will make to morning sign out without eating each other.

You may also like What Internship Looks Like: Sustenance.
Posted by Kristen Ann Ehrenberger at 6:16 AM No comments:

That's So Pittsburgh: a metal reminder of bygone days 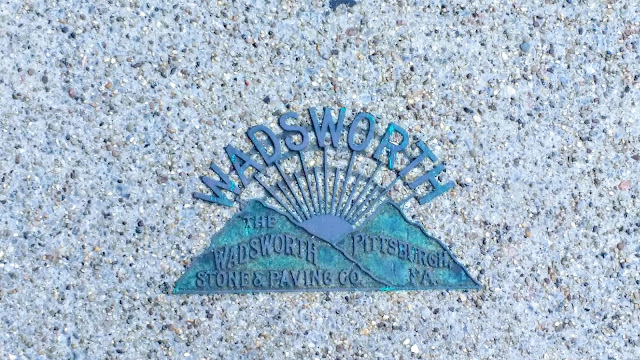 While walking back to our car in East Liberty after lunch on my day off, I looked down and noticed this bronze plaque set in the sidewalk. An object that dimly recalls the glory days of manufacturing in the Allegheny River Valley, it's from The Wadsworth Stone & Paving Company, Pittsburgh, PA. The name of the firm rises with the sun between two mountains. Other such markers are extant in the city: Father Pitt found one in Squirrel Hill, and kb412 found one on Mount Washington. According to a history by J. Richard Bowersox that I found online, the Wadsworth Company was incorporated in 1892, worked Kentucky rock from 1903 to 1917, and then was folded into the Kentucky Rock Asphalt Company. I hadn't realized that rock quarrying was a big industry in Kentucky in the early 20th century. The Pittsburgh City Photographer collection at the University of Pittsburgh has a photo of one of the local production sites in Larimer from 1911.

Know what else you can find in East Liberty? Motor Square Garden.
Posted by Kristen Ann Ehrenberger at 2:16 PM No comments: 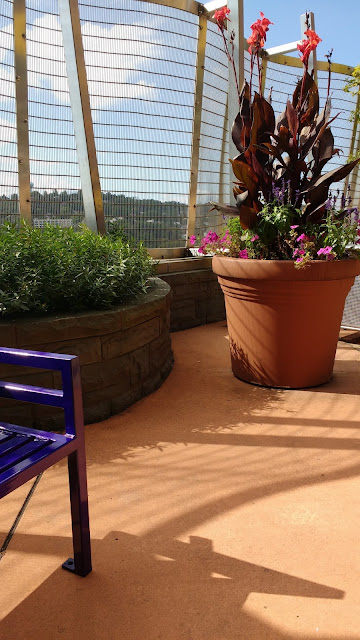 Sometimes residency looks like sunlight and shadows in the hospital healing garden. My attending likes to give her teams a break once a week, so I am AWL (absent with leave) from the ICU, enjoying fresh air and the giddy feeling of being outside in the middle of a work day.

Newer
Posted by Kristen Ann Ehrenberger at 11:06 AM 2 comments: 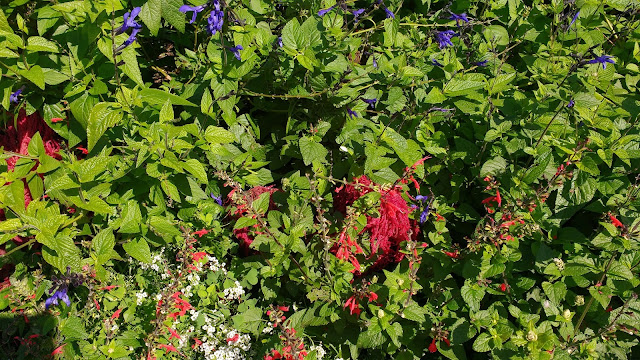 Sometimes residency looks like an outdoor snack break in the middle of a computerized exam to clear your mind and process the death of one of your clinic patients.

Newer
Posted by Kristen Ann Ehrenberger at 11:06 AM 2 comments:

Columbus: So Much Topiary! 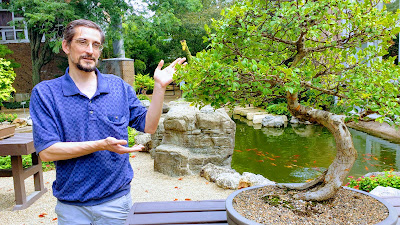 For years now we have celebrated our anniversary with a quick trip to a local city to recreate our honeymoon. We originally spent 5 days in Denver and Estes Park, seeing the botanical garden, the art museum (I bought us t-shirts: DAM that’s great art!), and a baseball game. In Estes we hiked up a small mountain to a little lake, where a chipmunk ate out of my hand. Then we flew to Cleveland, where we picked up Michael’s car from the airport where his parents had left it for us and drove all night to get to Champaign-Urbana to move into our new apartment together. The next year we went to Chicago, then to St. Louis and Kansas City, Indianapolis, Milwaukee, Cincinnati, Madison, and Metropolis, IL. The year I got back from researching in Germany I didn’t want to see another suitcase, so we stayed home and enjoyed each other’s company in our own zipcode. One year we counted an April jaunt to San Francisco as “the trip,” and another year The Chorale’s big tour of Central Europe to Budapest, Vienna, and Prague. I wanted to sail in the Greek islands for our 10th anniversary, but the timing was poor what with me getting ready to travel all over the US for residency interviews, so we saved up for The Chorale’s next tour, of Spain and Portugal. Then Dear Husband got sick last year. We moved to Pittsburgh and counted our blessings to have each other, as we celebrated our 11th, "steel anniversary" in the Steel City. 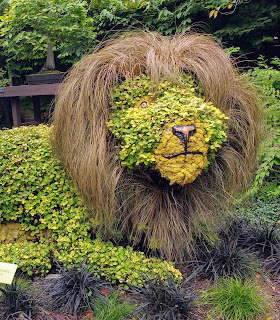 This year we celebrated with a fancy dinner on Mount Washington. Then, because I was off on Labor Day, so we decided to drive 3.5 hours to the other side of Columbus for DH’s family picnic after church. The weather only got nicer the farther west we drove from the remnants of Harvey. We had a delightful party, complete with corn hole (“bags”), kids having a water fights, and throwing a baseball around. Then we hopped in the car and headed into Columbus to the Comfort Inn in the German Village neighborhood, we had a lazy night watching Daniel Craig fall in love and get his heart broken in Casino Royale and then slept in until the end-of-breakfast rush at 9am. I was disappointed that the German Village visitor center wasn’t open the next day to tell us about the brick streets and houses, so we checked out and headed to the Kelton House, a Victorian mansion that was also a stop on the Underground Railroad. Alas, all my online research had not disclosed the fact that this museum is closed on Labor Day. Also the James Thurber House and the Columbus Art Museum. 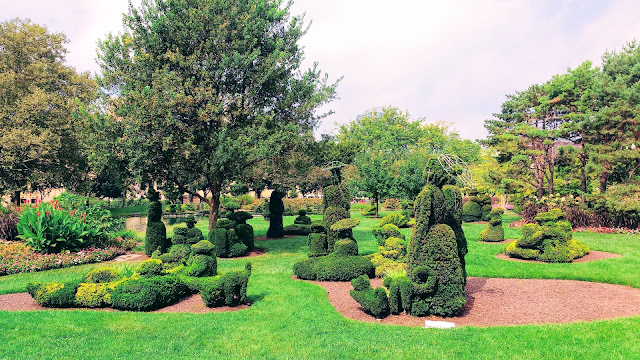 Plan B: So we took a stroll through the Old Deaf School Topiary Garden, which uses shaped yew trees to re-create the 54 human figures, 8 boats, 3 dogs, 1 monkey, and 1 cat in Georges Seurat’s post-Impressionist painting A Sunday Afternoon on the Isle of La Grand Jatte (1884). The large photo above is from the painter's perspective marker on a little hillock; the one below is a close-up of one of the boats. 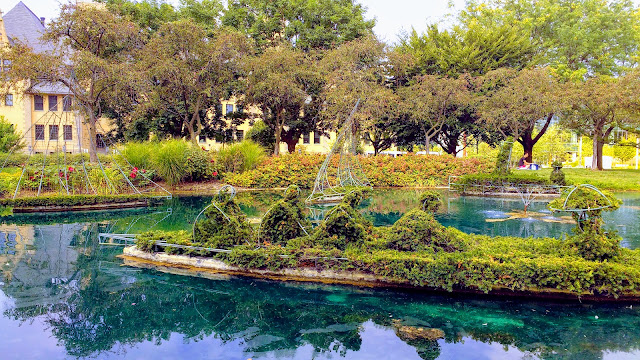 Then we ate some raspberry pie in the car, and set out for the second stop on our tour, the Franklin Park Conservatory and Botanical Gardens, which had the good sense to make their employees work on Labor Day (ha!), as the parking lot and grounds were full of people out to enjoy nature. First we ogled the Dale Chihuly pieces downstairs. Then we went upstairs to find the butterflies in the South Conservatory—an appropriately tropical South Pacific room. We were just in time to watch a staffer release a batch of new young butterflies. DH’s favorite was the large black one with brilliant blue wings; it had a wingspan at least the size of one of his hands. 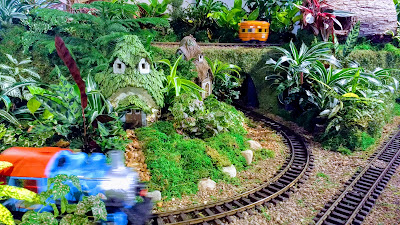 After the presentation, we hurried out of the heat and humidity of the tropics…into Himalayan and American deserts. The lower level concourse was blissfully cool, and full of hands-on activities for the young and young at heart: a coloring station, a large 3-D puzzle, and this train set up. That Thomas the Tank Engine rushing in from stage right, pulling Snoopy and the dog house; on the upper track you can glimpse the orange butterfly caboose.

One of the temporary attractions this season is topiary of endangered animals, which we encountered in the various rooms and gardens, like the lion above. Then we found chairs out in the workshop, just in time for the last glass-blowing demonstration of the day. An artist narrated as she created a red flower vase; there were a variety of specimens for sale in the gift shop. That was pretty cool. There was more Chihuly glass art, of course. 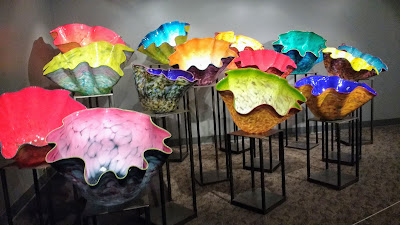 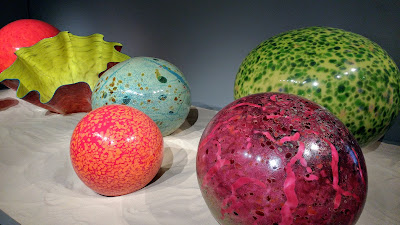 Upstairs were a collection of Bonsai, many of which were at least as old as I am. This conservatory is about the size of the Phipps, but I found the signage inadequate for really learning about the plants. It is however well set up for hosting events, as long as your guests don’t find baking in the greenhouses. Maybe it’s colder at night. After two hours we had seen everything and repaired to the car for apples to tide us over until we could get to Wheeling, WV, for pizza and salad dinner. Although we did not see everything I had planned on this short trip, it was restful, which is the most important thing, and we got home in good time for me to go to bed early in advance of three weeks of 4AM wakeups. 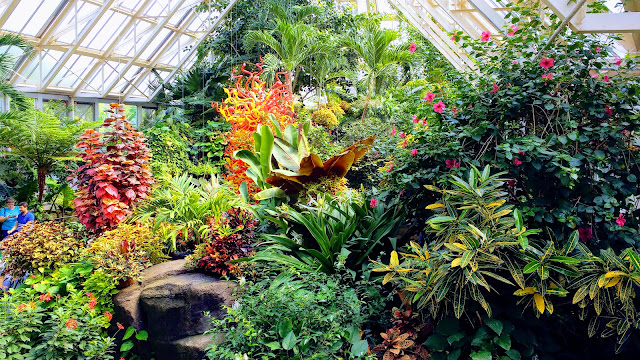 At 3 hours from Pittsburgh, Columbus is not a bad drive away for a weekend jaunt. My impression of the city is of wide streets with little traffic. There's clearly plenty more to see and do, such as a prize-winning zoo. I expect we'll come back to get a better taste of Ohio's capital city.
Posted by Kristen Ann Ehrenberger at 8:18 PM 1 comment:

Email ThisBlogThis!Share to TwitterShare to FacebookShare to Pinterest
Labels: art, garden, glass, holiday, Kultur, memory, museum, relationships, travel
Newer Posts Older Posts Home
Subscribe to: Posts (Atom)
The blog title names my three main roles and goals in life: as a woman/wife (Frau), as a PhD in German history (Doktor), and as a future complex care specialist (Doctor). I write these posts to amuse myself. If they amuse you, too, please leave a comment!