Two weeks ago, Dear Husband (DH) came to visit me!  We spent the first couple of days here in Dresden before taking a week-long trip through Austria.  He is, after all, half-Austrian, but it had been almost 20 years since he had been there; and I knew some about the country, as the theme for my brush-up German course the summer before last was Austrian geography, culture, and literature.  We’d been talking about and planning this trip since before I left the States, so it was exciting to finally go.  But first, DH got a small dose of what my days are like in Dresden.  (These posts were all written by the time I got back here, and I will publish them one or two at a time, with photos.)
Tuesday:
I spend the day at the Main State Archive, where there is no internet.  I am supposed to leave from there to meet DH at the train station at 5pm.  The night/day before, I suggest he call the archive if he doesn’t make his train, so the archivists can let me know.  (No cell phones allowed in the reading room, of course—although why I didn’t just have him call my phone directly, for me to check on break, only just occurred to me.  Especially since the archivists speak English, but apparently the receptionist does not.)  After my lunch break, in fact, one of the archivists tells me a Herr Hammer called and that something happened with his train.  I didn’t know the word(s) she used, but since we set it up that he would only call if things weren’t going to plan, I guessed he was coming in an hour later.  We did eventually manage to meet each other at the train station.
It turns out that DH would have made the original train, but that after he bought his ticket and went down to the track, he discovered the train had been canceled.  Why they still sold him a ticket, neither of us knows.  At any rate, he was able to sleep some on both the plane and the train he eventually took.  After the usual pleasantries, we head out to catch the street car home, and manage to catch it after a sprint.  We listen to Miles Davis while catching up with each other and cooking dinner.  DH is thrilled to bathe after 18 hours traveling. 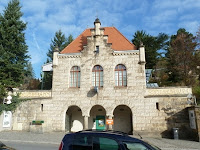 Wednesday:
Him: Are we on our way to meet God?
Me: You know, if the builders of the Tower of Babel had started here, they wouldn’t have had so far to go! 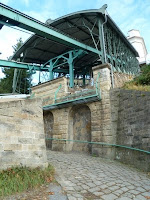 I thought we might combine a little business with pleasure by taking a walking tour of my neighborhood, Loschwitz, which was once the home to a number of health spas and some of Europe’s richest and most famous.  The attraction for DH, a train enthusiast as a kid, are the two Bergbahnen (mountain railways): the Schwebebahn (the first mountain suspension railway; built 1901 at 274m long, 84.2m up, at a 39.9% grade) and the Standseilbahn (a funicular railway; built 1895 at 547m long, 96m up, with a maximum grade of 29%).  Unfortunately, the Schwebebahn is out of service for annual repairs, so we don’t get to ride this antique transit specimen: Strike 1.  We do look at the little church down the street, which was built by the same architect as Dresden’s famous Frauen Kirche, but earlier.  So as to be able to continue our tour, we decide to “walk” up to the lookout point at the upper tram stop.  You’ve heard about the enormous hill/small mountain of which I live at the foot, right?  Well, back in the day, the residents used dog-carts to carry things up and down the slopes, because horses and donkeys weren’t sure-footed enough (!).  We had to hike up another one of those ridiculously steep paths to get to the lookout, laden with our laptops, books, and provisions: strike 2.  Once we get to admire the view of the Elbe River and Valley, my camera battery icon starts blinking red.  I snap a few quick shots before it dies for good: strike 3.  By this point it is nearing noon, and I had hoped to spend the afternoon working, so we give up on the tour, vow to try again the next day (with re-charged batteries!), and find the bus stop. 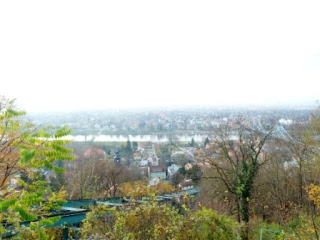 Luckily for us, the bus we want, which only comes twice an hour, will arrive in 10 minutes.  We snack as we wait.  The ride was actually pretty cool: the street just seemed to go up and up and up.  Eventually we do reach the top, where the woods give way to fields of some unidentifiable crop.  The rest of this day consists of transcribing, reading, and (for one of us) napping in the archive.  Dinner is pasta and salad back at the apartment.

To the right you can see the Schwebebahn tracks stretching down the hillside.  The trams hang underneath the rails.  I suppose this could be a vista picture from just about anywhere, but on the right-hand side in the middle ground you can see the Blaues Wunder (Blue Wonder), a suspension bridge that was a "wonder" when it was built in 1893 because it does not have any pylons in the river proper, just one on either bank, and the bridge is suspended between them.  Supposedly it is "blue" because of the paint, but I think it looks more "sea foam green."