That's So Pittsburgh: the Nationality Rooms at the Cathedral of Learning 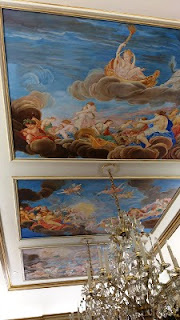 Because I had to work Thanksgiving, Dear Husband spent the holiday with my family, and then they all drove up to Pittsburgh so we could spend part of a weekend together. On Sunday afternoon, our friend J.E. had offered to give us a tour of some of the Nationality Rooms at the University of Pittsburgh Cathedral of Learning. We met up in the entranceway to this great building. Reportedly the tenth president of the university had it constructed as a landmark 42-stories tall after he showed up in the city to take the job in 1921 and the cab driver who picked him up at the train station didn't know where the university was. Its Gothic cathedral design makes me want to study with this Gryffindor Common Room sound mixer playing in the background.

The rooms are always decorated for the winter holidays, and there's a big multi-cultural festival the first Saturday of December. J.E. took us to the Czechoslovak room, dedicated in March 1939, which combines elements reminiscent of Charles University in Prague with a Slovak farmhouse and a country church. It very much had an early twentieth-century feel to me. There are portraits of famous Czechoslovak leaders, botanical paintings on the walls and ceiling, and knickknacks. 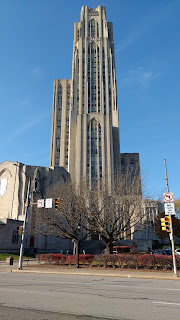 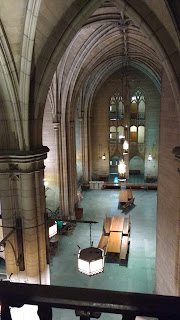 When we went upstairs to the Austrian room, we were transported to Esterhazy Palace in the eighteenth century. (Click here to read about DH and my visit to the Haydnsaal in the twenty-first century.) In addition to the audible tour that played at the touch of a button, there were Viennese chairs around the long table, a magnificent ceiling painting (above), and--tucked in the corner--a creche. It reminded us of the large antique Krippe we saw when we visited Austria back in 2010. 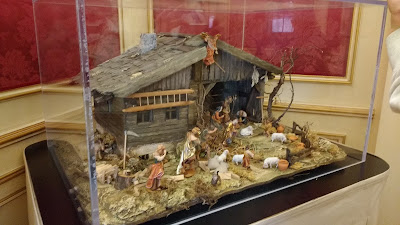 Finally, here's the whole gang. The parents and grandparents were delighted with the visit, which concluded with stop on one of the highest floors, from which we peered through the windows at the wide vistas of Allegheny County. If you would like to take a tour of either of these rooms--or any of the other 28--just click on the "Nationality Rooms" link above. 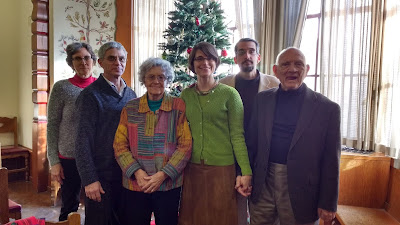 Editor's note: If you like to read about architecture and/or history, you might enjoy these other That's So Pittsburgh posts about Motor Square Garden and Homewood Cemetery.
Posted by Kristen Ann Ehrenberger at 7:30 PM