Next in an intermittent series on churches we have visited. Today it was Beulah Presbyterian Church. Founded in 1784, it is the oldest Presbyterian congregation in Pittsburgh. The brick churchhouse built on the top of a hill in 1837 gave the area the name "Churchill." (Clever, huh?) The current building was built in 1954 and has what Dear Husband calls the "church space needle" (left) out front. The sanctuary has a semi-traditional chancel and cushy chairs instead of pews.

They usually have a contemporary and a traditional service, but this morning was a single blended service before a church-wide meeting to vote on new leadership. Today was World(wide) Communion Sunday--a gift from Pittsburgh Presbyterians to the rest of the Church--but the liturgy little reflected it, except that the theme was the Holy Spirit at Pentecost. We realized it was the first worship service we had attended yet with a praise band, which I liked. 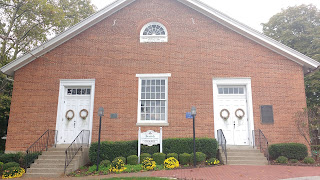 Afterwards we tramped up and down the hillside through the wet leaves, looking at the tombstones. We speculated about family relationships and causes of death, given the sex, age, and death year: toddler cousins who died of measles in the 1870s? A young man who succumbed after a farming accident in the 1830s? A middle-aged man who suffered a heart attack in the 1960s? Then there was the woman who had lost two children in infancy and whose third baby died a few months after she did. The husband/father was a minister. Speaking of which, what was John Wesley Somebody-or-Other doing buried in this Presbyterian churchyard? 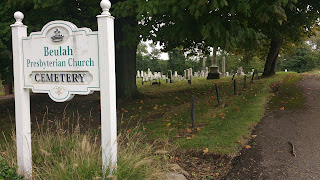 The Beulah Cemetery has the largest collection of graves of Revolutionary War soldiers in Allegheny County. All the veterans' graves were marked with medallions and American flags. Here is the dual gravestone for "Elisabeth, wife of John Hughey, daughter of Robert King of Lancaster Co., PA, born Mar[ch] 10, 1753, died July 29, 1838, and John Hughey, son of Joseph Hughey of Lancaster Co., PA, born Jan. 31, 1752, died May 2, 1837, a soldier of the American Revolution." 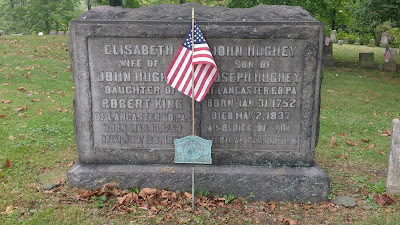 Some of the gravestones are shiny and new, while others are small and so worn from the elements as to be illegible. I wondered about the efficacy of putting a "permanent" marker over a grave. DH opined that they probably last as long as necessary for those who care to remember. 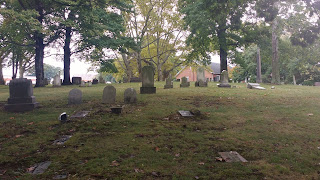