The Bengal Tiger: Who Finished Whom? 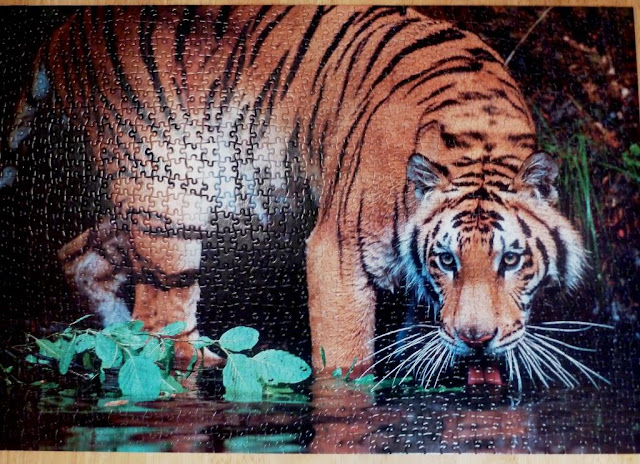 “What are you going to do on your day off, hon?” he asked. He was reading the sports section and sipping his second cup of coffee. “I’m finally going to do that 1000-piece jigsaw puzzle your mother gave me for Christmas. It’s a Bengal tiger.” She flashed him a toothy grin and made clawing motions with her hands.

When he wandered through the dining room a few hours later, she was crouched on a chair, scanning the partially completed puzzle.

“It’s harder than it looks—aha!” she replied, snapping a piece into place. “The colors are so subtle that the pieces don’t seem to fit until you try them, and then they just lock into place.”

“Here kitty, kitty,” he said, chucking the tiger under the chin. Or what would be his chin, once she found that piece.

She stroked his muscular flank. “He’s a beautiful animal. So strong and majestic.”

“And a hunter,” he answered. “What if he eats you?” he teased, bending down to nibble on her neck.

She laughed and pushed him away. “Gosh darn it, I’m going to finish this puzzle if it’s the last thing I do!”

She admired how the flesh of the tiger rippled in the image. Seemed to ripple, she corrected herself. She had been looking at the same shades of orange, red, black, brown, and green for so long that they had started to blend and blur together.

She slumped back in the chair and sighed. It was dark outside. When was the last time she had eaten? Her stomach growled.

In the morning he rolled over and reached out an arm, but her side of the bed was empty. The pillow had not been slept on. When he went downstairs, there were signs of a struggle—chairs tipped over, puzzle pieces scattered all over the floor—but no sign of her.

When he eventually got around to picking up the room, after the police had left, it slowly dawned on him that there were no orange pieces, only dark green and black ones, the ones she had set aside for the jungle border. “I’ll do those last,” she had said, “that’s the scariest part.”

Editor’s Note: This is a work of fiction. Any resemblance to persons living or dead is a coincidence. No tigers or interns were harmed in the production of this story.
Posted by Kristen Ann Ehrenberger at 11:05 PM