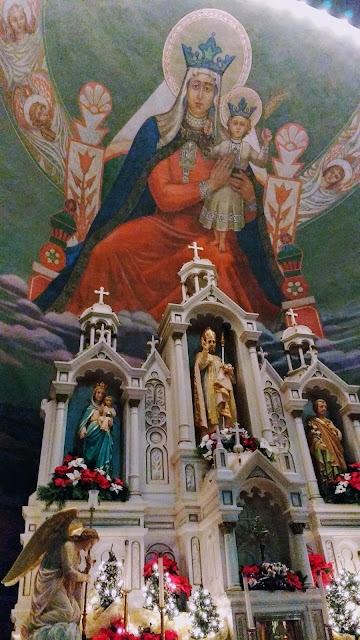 After Christmas, friend JHR invited me to a docent-led tour of the Maxo Vanka murals at St. Nicholas Church in Millvale. The first of two Croatian Catholic Churches in Pittsburgh suffered a fire in 1927. After being rebuilt, the walls were painted white. Then a new priest knew someone who knew a Croatian artist who had fled pre-WWII Europe to New York City with his American wife and daughter. Vanka (1889-1963) came to Millvale for 8 weeks in 1937 to paint murals on the walls just in time for the 10-year re-dedication of the church. He came back in 1943 for a few more months to paint more. In 1951 he returned to paint symbols on the choir loft.

Behind the altar, Vanka painted a Croatian-inflected Byzantine Madonna and Child with Croatian immigrants at their feet. Around the walls, he contrasted images of Croatian mothers mourning sons killed during World War I with immigrant mothers mourning sons who died in industrial accidents. He also depicted the Evangelists with a silver-leaf background that used to be behind Mary and Jesus, before a re-paint in the 1970s. I'm not such a fan of the silver, but apparently the mural preservation society hopes to restore the original look. Over the last several years, seven conservation artists (all women) have painstakingly cleaned and brightened many of the murals. They have also rigged up a fancy LED lighting system.

Some of the images Vanka created in 1937 and especially in 1941 are pretty avant garde, but the weirder ones he put towards the back of the sanctuary or on the ceiling. 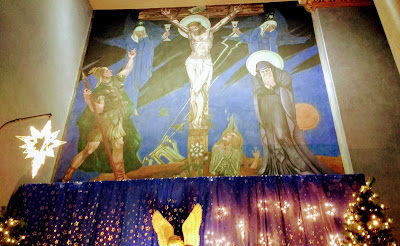 Above the large creche you can see the fairly conventional crucifixion scene. (Lighting was hard.) 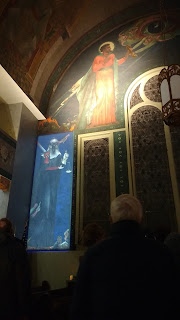 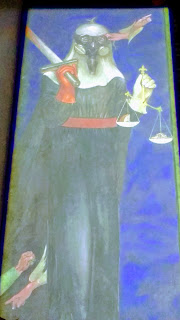 Here you can see the paintings being highlighted around the stained-glass windows. That's Injustice there on the right, wearing a gas mask and one blood-red glove, bearing a bloody sword and uneven scales. Below on the right is the angel of Justice, wearing white and holding up even scales. I rather liked her. 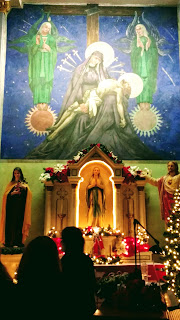 Above on the left is the Pieta, with Mary holding Jesus' body off the cross. You can see that the church was still decorated beautifully for Christmas with white lights and red and white poinsettias. 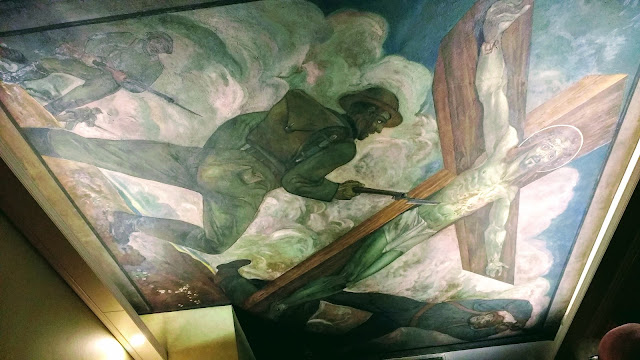 Here's one more for you, a sickly green Jesus being crucified on a twentieth-century battlefield. It's the kind of thing that was getting artists purged over in Europe, but here Vanka was safe to make his critique of war and class warfare. My photography is obviously amateur; it's much better to see the murals in person.


Editor's Note: You might also like my posts about an eating tour of the Strip District or St. Paul Cathedral's summer organ series.
Posted by Kristen Ann Ehrenberger at 9:14 PM