Butler, PA: Home of the Jeep 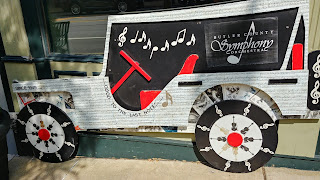 An hour north of Pittsburgh on Route 8, the city of Butler, PA, has 13,000 residents. It was founded in 1800 as the county seat and named for General, State Senator, and Judge Richard Butler (1743-1791). It used to be a manufacturing center for Pullman railroad cars, and the Bantam Jeep was born here in 1940. (There's a Jeep festival every June!) Now it's the home of Westinghouse Nuclear and was named Smithsonian Magazine's 7th Best Small Town in America in 2012. Local resources tout its Main Street and craft breweries, but I know it as an economically depressed and low-resource area from the patients I've taken care of who were transferred from its (still) independent community hospital. The pic to the left depicts one of the many wooden profiles of Jeeps decorated by various organizations, not unlike Baltimore's crabs, Berlin's bears, or Pittsburgh's dinosaurs.

After visiting the Maridon Museum (see previous post), Dear Husband and I took advantage of the nice weather to walk to the central square, where we visited the war memorials. Curiously, the large granite WWII memorial gives its end date as December 31, 1946. When we went to dinner at the home of our interim pastor and his wife, a high school history teacher, she confessed she had never noticed the discrepancy and didn't know why. 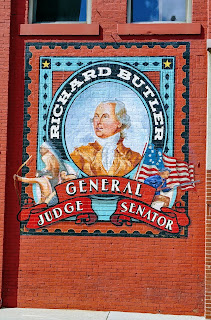 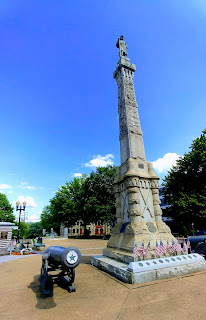 Butler was an interesting fellow: born in Ireland, as a boy he immigrated with his family to Pennsylvania. The family business was gun making, and they settled in successively more western locales, never quite making it as far as the area that now bears their names. All five sons fought with distinction in the American Revolution, and George Washington chose Butler to receive Cornwallis's sword of surrender. Things and things, and the Baron von Steuben nearly dueled him over this honor, so they just let von Steuben do it. Butler was apparently considered something of an expert in the Native American tribes living in the area, perhaps because he fathered a child with Nonhelema, a Shawnee chieftess. Wikipedia doesn't go into details, but he's probably responsible for deceiving the tribes about colonial intentions or otherwise bilking them out of their land.

After dinner, we tootled over to Kelly Automotive Park (used to be called Pullman Park) for some minor league baseball. On a mild night, we watched the hometown Blue Sox lose to the Kokomo (IN) Dragons. Then it was time to roll on down Route 8 and home. 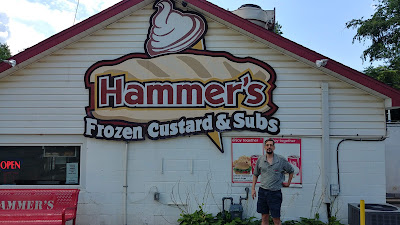 Oh yeah, and on our way up to Butler, we stopped for a sub and some ice cream...at Hammer's Frozen Custard & Subs. Unfortunately, the girl working at the window wouldn't give Dear Husband a discount, even after he showed her his driver's license. The sub was okay (and cheap), but the ice cream was really good! We may drive back up Butler way again, as I hear the county fair is pretty good.

Editor's Note: This is part 2 of our day trip to Butler, PA. Click here for part 1.
Posted by Kristen Ann Ehrenberger at 10:10 PM