As counterpart to my Dresden: Now blog post about contemporary art, "Dresden: Then: concerns a museum trip I made my last day in Dresden to the Panometer Dresden. Yadegar Asisi uses a computer and photographic or historical images to create enormous 360-degree panoromas of ancient Pergamon and Rome, Mount Everest, or the Amazon rainforest. They've been exhibited in Dresden, Leipzig, and Berlin. Each panaroma is printed on an enormous piece of canvas and hung as a cylinder. Asisi has manipulated the images so that the best perspective is from a stand in the middle, as if you were standing in a tower. He's done two historical versions of the Saxon capital, both in the eighteenth century of Augustus the Strong. The first one was supposed to be a snapshot from 1756. The second one combines various real persons/events with a general feel for the time period; in particular it plays with light. The "sun" rises and sets, there's a thunderstorm, and at night you can see the light of "candles" in the windows. These are photos I took (without flash).


You might remember from an earlier post that August II was an Elector in the Holy Roman Empire. After the Thirty Years War (1618-1848), Saxony was declared Protestant from the Elector on down to the lowliest serf. Well, Augustus wanted to be king of Poland, which was/is a Catholic country, and he was okay with converting in order to purchase the crown (1697). (His poor wife was not, however, and she wrote tearful letters to him and their son about her prayers for their immortal souls.) The rest of Saxony was allowed to remain Protestant (breaking the rules of the Treaty of Westphalia, 1648). 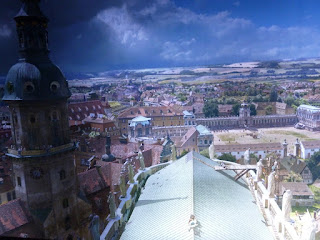 Augustus needed someplace to worship, so the Hofkirche (court church) was built, with an elevated, enclosed walkway to the Residenz, so he wouldn't disturb the Bürgers going to and from mass everyday. This is the view from the top of the observation tour as if you were standing on the top of the tower of the Hofkirche. The "Kathedrale" has white statues around the outside of disciples, saints, and Church fathers. On the right-hand side, in the shadow of the breaking dawn, is the tower of the Residenz. Further to the left is the rest of the Altstadt. The Elbe River is behind and to the right. In the background lie the half-finished grounds of the Zwinger. 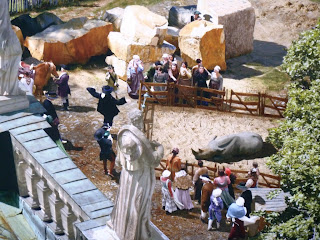 Here is a better view of one of the statues around the roof, and below is a famous itinerant preacher (I forget his name and schtick) and Clara, the Indian rhinoceros (she visited in 1747). There are lots and lots of details like this to be seen all around the panometer. There is a free guide for some of them--or you could buy the book to see them all. 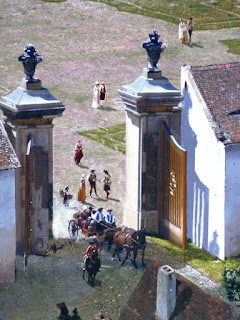 "Behind" that group, higher on the cylinder, is this shot of the gate of the Zwinger. This area was originally part of the city's fortifications. Then, at the end of the 17th century, Louis XIV had just moved the French court to Versailles, and August II wanted something similar. It was supposed to be an oval palace surrounding gardens. Begun in the early 1700s, it was three-fourths complete when Augustus died (1733). His son's court abandoned the project. Just over a century later (1847-1855) Gottfried Semper was hired to design an art gallery to fill the last fourth of the oval (and the opera house in the square to the right. 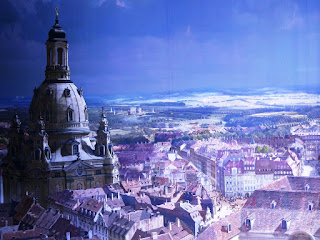 Finally, there has long been a sort of rivalry between the Hofkirche and the big Protestant church nearby: a little earlier the Frauenkirche was being re-built as a monument to Protestantism--yes, even with a name like Church of Our Lady! Here it rises majestically above the red rooftops of the Altstadt. This is a good quarter turn to the left from the first image and was also taken in "the morning hours."

These are the images of "Dresden: Then" that came out the best. I hope they've given you a good sense of Baroque Dresden and the panometer as a neat way of presenting images. Next up: Leipzig!

Posted by Kristen Ann Ehrenberger at 10:02 AM