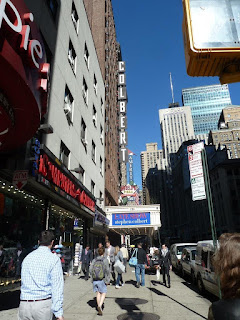 One of the things fourth-year medical students do is away rotations. This is when they ask another medical school if they can visit. Sometimes students do this to audition for a residency program. Other times they want exposure to something their own school doesn’t offer. That was the case with me: I wanted to learn about pediatric physical medicine and rehabilitation. I have already written about the insanity that is applying for these positions. The ridiculousness of that list was compounded in my case by my inability—despite fifteen years of higher education—to figure out how to properly use a special website to upload all the paperwork necessary to get a background check in New Jersey. And by the hosting institution forgetting to email me the start time and place information, such that I wasted the first of my ten days there trying to get somebody anybody to tell me where I was supposed to report. I got scolding emails from the background check website for a month until I called and asked them to deactivate my account.

ANYWAY, after all of that nonsense, I needed a girls’ day-out with some of my college besties. After some bus and subway shenanigans, we met at Port Authority for a Greek lunch and then hiked up to the Museum of Modern Art (MoMA), me dragging my suitcase behind. Along the way, I snapped this shot of Stephen Colbert’s Tonight Show headquarters on Broadway for Dear Husband. At the MoMA, we joined the masses to take in the modern European gallery. Here are a few of my favorite pieces. 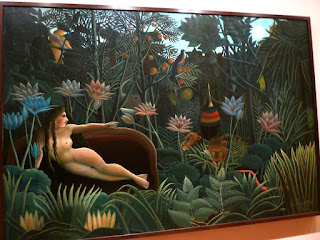 “The Dream” (1910) is one of Henri Rousseau’s jungle paintings. Rousseau (1884-1910) never saw an actual jungle. Instead, he consumed its representations in the metropole, through the Jardin des Plantes, colonial expos, and popular literature. The first thing that leapt to my mind was Joseph Conrad’s Heart of Darkness. The painting also evokes Eve in the Garden of Eden and the writings of another good imperialist, Rudyard Kipling. 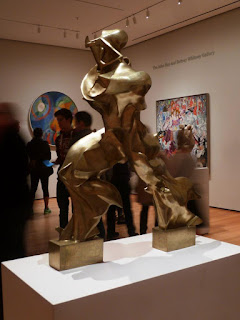 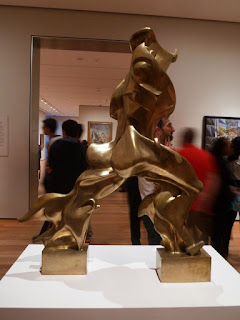 This 1913 Futurist sculpture--"Unique Forms of Continuity in Space" by Umberto Boccioni (1882-1916)--graces the cover of one of my favorite books from graduate school, Stephen Kern’s The Culture of Time and Space, 1880-1918. A group of Italian artists became particularly enamored of the parts of modernity that were fast and sleek, like locomotives and automobiles. Here, a running man has become a little bit of each one. Kern talks about how new technologies like telegraph and cinema compressed time and space: a message could cross hundreds of miles in seconds rather than in days, and the curious could watch dispatches from the front lines back home during WWI.

Best Title went to an art-glass sculpture by Marcel Duchamp, "To Be Looked at (from the Other Side of the Glass) with One Eye, Close to, for Almost an Hour" (1918). 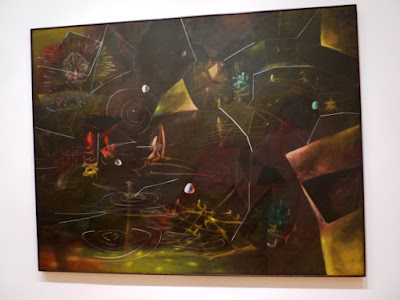 Roberto Matta’s “inscape” entitled The Vertigo of Eros (1944) was entirely new to me, but I liked the tension between the abstract and the concrete. I see Gaussian lines, bodily organs, algae, endoreticulum, crystals, and ripples. It is an “automatic” illustration whose inspiration is supposedly somewhat mystical. Matta (1911-2002) was born in Chile but lived and worked in various countries throughout his life. 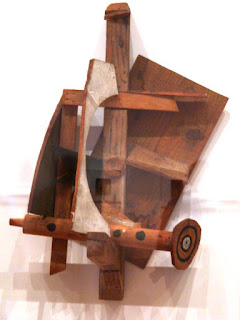 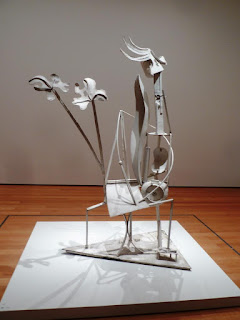 Then we wandered through the large exhibit on Pablo Picasso’s sculpture. It turns out he was never formally trained in this medium, and he rarely if ever exhibited his three-dimensional work during his lifetime (1881-1973). However, he kept many pieces in his studios, and over 100 were on display at MoMA. He went through phases during which he experimented with one material or another: clay, cardboard, metal, plaster of paris, found objects. Unsurprisingly, none of his sculptures are conventional. To the left is a still life of musical instruments made out of cardboard. To the right is a metal woman in a garden from 1929-1930. She’s probably naked, like all of the other women in his art. But I still think it looks like a rooster. 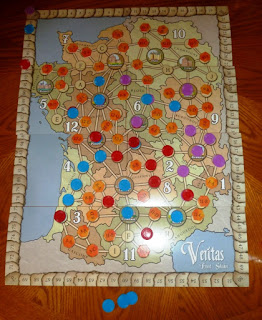 Hungry, but not wanting to battle Friday evening rush-hour traffic, we treated ourselves to coffee and dessert in the nice cafe on the 5th floor. Finally, we headed home to eat dinner, listen to the final game of the World Series, and play a neat board game called Veritas from Cheapass Games. Each player represents a different version of “the truth” recorded in manuscripts in a medieval French monastery. Each turn, you can copy and/or spread your truth to other monasteries. Sometimes one burns down, and then the manuscripts scatter. The goal is to strategically take over the most territory possible. CM and I duked it out until EF secured a come-from-behind victory, unlike the New York Mets, who lost in four straight to the Kansas City Royals.


The next morning I flew out stupid early to begin Residency Interview Season.

*EF's aunt once misquoted a hymn title while out with EF and her mother. It should be, "Lead on, O King Eternal!" But now we laugh about kinky turtles whenever we have a college besties' girls-day-out.
Posted by Kristen Ann Ehrenberger at 11:42 PM