That's So Pittsburgh: the Duquesne Incline

Dear Husband's parents came to visit, so we decided to ride the Duquesne Incline 400 feet up to Mount Washington and eat dinner at one of the restaurants there. DH says Mr. Rogers originally wanted to have a funicular in his set, but purportedly for reasons of design the little red car was put on a horizontal track rather than an inclined one. Being a city of hills as well as of rivers, Pittsburgh once had 22 different inclines for coal, freight, and passengers. (Click here to see an interactive map.) (Click here for a before/after picture of the now-defunct Penn Hill Incline.) 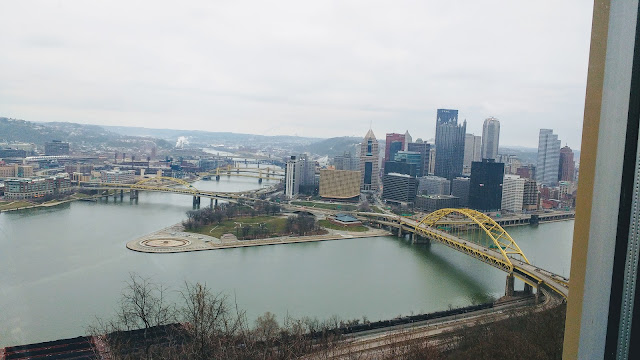 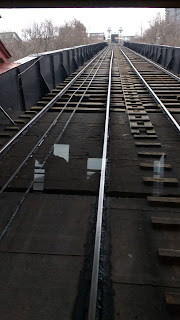 This was our cloudy view of the Point and Downtown. Coming from the right is the Monongahela River; above is the Allegheny River; they come together to make the Ohio River, which flows off to the left. We observed the EMS lights of a traffic accident on the Fort Duquesne Bridge (nearest bridge on the left) and, after the sun set, the "Energy Flow" LED light display on the Rachel Carson Bridge (way in the background). Just down and to the left, we could watch the bright red funicular cars riding up and down the 794-foot tracks. The Duquesne Incline opened for business on May 20, 1877. Its two cars are pulled on parallel tracks at 6 mph at a grade of 30.5 degrees. The cabins are enclosed but not insulated, so it was a chilly ride. Dinner took just long enough that we could see the sun go down and all city lights come on. Touristy but worth it.

If you are interested in other Pittsburgh landmarks, check out my posts on the Cathedral of Learning or the Motor Square Garden.