Like many of us I suppose, I'm a creature of habit. And I am in the habit of eating yogurt with fruit and granola in the mornings for breakfast while berries are in season, and oatmeal with raisins +/- walnuts during the winter and early spring. Sundays are for pancakes with peanut butter or Nutella. But I do like to cook and am not averse to changing things up when I have the time, so during a slow overnight shift in the ICU, I looked up new breakfast recipes. I found three that I thought would fit my budget, diet, and time constraints; here's the first one.


Barley and Compote
1. Thaw bag of frozen blueberries in fridge until you have a free morning to spend 45 minutes cooking breakfast.
2. Put pot on stove.
3. Discover you have a jar of pearl couscous in the cupboard, not pearl barley.
4. Make oatmeal for breakfast.
5. Purchase pearl barley.
6. Wait for another day with a late start.
7. Bring 1 cup of pearl barley, three cups of water, and some salt to a boil. Then simmer for 25 - 30 minutes, or until the water is absorbed.
8. Simmer 1 cup of thawed blueberries, one-and-a-half tablespoons of orange juice, and one teaspoon of honey for 10 minutes to thicken it. The original recipe called for 2 teaspoons of orange zest and 2 teaspoons of chia seeds, but I did not have these available and so did not include them.
9. Spoon barley into bowl. Add some blueberry mixture. Forget to top with a quarter cup of milk and toasted almond slivers.
10. Eat. 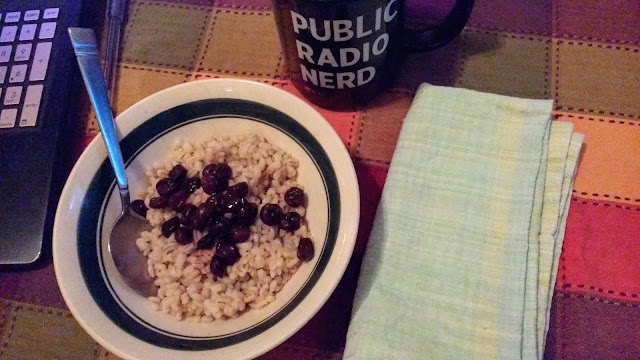 The barley provides a not-unpleasant chewy texture like steel-cut oats. 1 cup of dry barley makes enough cooked barley for 4-6 servings. I made another bowl with pear and maple syrup, which was good. I tried again with milk, blueberries, and walnuts (no almonds in the house). Then I pretended the barley was oatmeal and used cinnamon, raisins, and brown sugar as toppings. I have a cup of dry barley left over after this experiment, and I will use it again to introduce some variety in my breakfast routine. Maybe I'll flip the script and try savory oatmeal for dinner one of these days!
Posted by Kristen Ann Ehrenberger at 10:06 AM