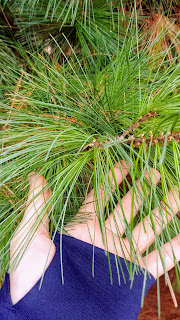 About a year ago, Dear Husband and I joined the Western Pennsylvania Conservancy. We wanted to associate with a local organization doing good work in our area and were inspired to give of our time, money, and effort occasionally. In recognition for the couple of tree plantings we've done (here and here), we were invited to volunteer appreciation day. There was lunch of sandwiches and cookies at the WPC headquarters, followed by two nature walks and a drawing for door prizes.

Naturalist Charlie led the first talk, about the island now known as Washington's Landing (slick for neat photos from the Post-Gazette). During the French and Indian War, a young George Washington was traveling back from upstate New York to Virginia and spent the night  with a companion on this island in the Allegheny River. Or maybe it was Wainright's Island closer to the opposite shore, which has since been washed away. Anyhow, what was once a collection of glacier silt carried in the swift waters of the Allegheny has since been used as a cattle stopping ground on the railroad from Chicago and as an industrial complex. It was a brownfield eyesore until the 1990s, when various government and private groups came together to clean it up and turn 1/3 into riverfront housing, 1/3 into a corporate subdivision, and 1/3 into a public park. (Click here to find old aerial photographs from around Pennsylvania.) 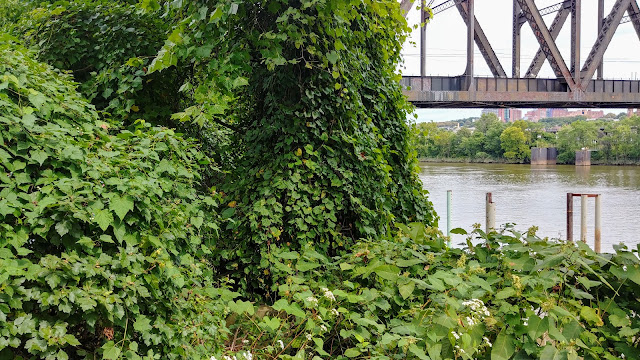 We learned that both the river and the greenscape have changed a lot since the 1700s. Both of the rivers around Pittsburgh are now dammed to allow more water traffic, slowing the Allegheny considerably. Washington may have seen trees like the maple and sycamore growing on the banks, but the sweet gum and Chinese sumac (aka tree of heaven) that dominate now are recent additions. In fact, WPC might have to cut down the Chinese sumac, because a few years ago the Chinese spotted lantern fly was found in Pennsylvania. This non-native species is a big nuisance and apparently requires the Chinese sumac for its life cycle. And while emerald ash borer and chestnut blight are other tree diseases that have come into North America, we have exported things like sycamore canker stain to Europe. The vector for that one was taking sycamore back to England and crossing it to make London plane trees, another popular urban tree nowadays. 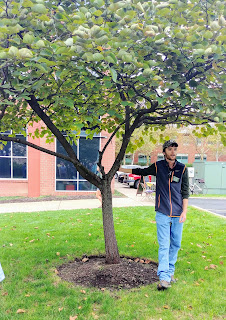 Arborist Brian told us all about those and other trees. Did you know that the Eastern White Pine was the first symbol on a flag of the American Revolution? That conifer was the rural version of tea taxed by the British, who wanted its tall straight trunks for ship masts. Unfortunately, people used the trees for all sorts of things, including furniture, matches, and roof shingles, without a thought to conservation. By the time Teddy Roosevelt came into national office in the 1900s, they were practically gone from the Eastern Seaboard. You can identify them by their soft needles that grow in groups of five (above). To the right he is standing underneath a redbud tree like the ones DH and I helped plant. They're hoping to make early April a tourist draw to the city to see their pink foliage, not unlike the cherry blossom festival in Washington, D.C. Judas Iscariot is said to have hanged himself from a Middle Eastern variant of the redbud tree, whose flowers turned from white to pink-red because of the blood on his hands.

Washington's Landing is a neat destination. DH and I talked about packing a lunch for a picnic overlooking the river. There's a trail that goes most or all of the way around the island, as well as a marina and a seafood restaurant. Come visit us, and maybe we'll take you over the river and through the woods!


Editor's Note: If you enjoyed this edition of That's So Pittsburgh, you might also like to read about the Pittsburgh Botanic Garden or an eating tour of the Strip District.
Posted by Kristen Ann Ehrenberger at 4:52 PM