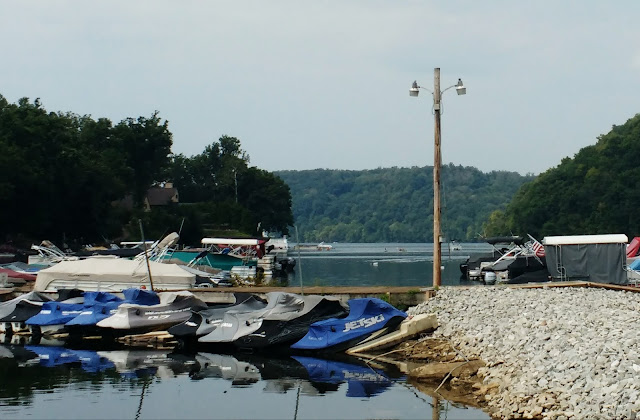 The metaphors practically wrote themselves.

Dear Husband and I had decided to go canoeing on Cheat Lake*, West Virginia, after my pediatrics intern retreat had concluded. Renting a canoe for an hour was $5 cheaper, but the rental guy warned us there was a slow leak in the boat that would let on about a gallon of water in the time we would have it on the lake. With 80-degree weather, an overcast sky, and gentle rain when we started, neither of us was interested in getting particularly wet, so we opted for the kayak. After clipping on our life jackets, I volunteered to sit in the back and steer (of course), while Dear Husband folded himself into the bow of the kayak. And off we went.

The last six months of cancer, Matching, graduation, moving, and internship have been stressful, but DH and I have tried hard to stay positive and connected. That fell apart the last two weeks, as I changed to a very busy in-patient service on which there were only "long-call days"--no one went home early because there was too much to do. After seeing me only long enough to serve me dinner and tuck me into bed three days in a row, DH asked that if I had to work late on Wednesday, could I please do it from home, so at least I would be ignoring him from the same room. (!) My senior resident and co-intern agreed to send me home from the hospital "early"--whereupon I proceeded to spend the evening (sans an hour for dinner), writing notes and discharge summaries in one corner of the study, while he worked in the other. Thursday was a busy half day at the hospital followed by a quick 45 minutes of changing and packing before my ride picked me up for the retreat. Friday DH drove down to join us, and a late lunch was the first time we got to have uninterrupted time together in nearly a week.

So the state of our relationship was at the forefront of my mind this weekend, and you know where I'm going with this kayak metaphor, right? Unsurprisingly, paddling together and steering were intermittent problems for us to solve on the lake today. Occasionally we found a rhythm and stroked together with power and efficiency. Other times I hit his oar or life jacket with my oar. Or one of us was pulling us to one side or the other. Just as in our relationship, we had to communicate our desires to each other with patience and without blame.

It occurred to me at one point that I might be more of a canoer than a kayaker. Kayaking requires you to make even, shallow strokes well-timed with your partner. Canoeing allows you to paddle deeply, now on onside, then on the other, as the situation demands. Two nights before, the first exercise the interns did on our retreat was to rate ourselves according to personality traits: I scored myself highly on curiosity and analysis and was surprised at how accurately the text description of this personality (for whom the worst thing is to be wrong) fit me. When DH heard the categories later (curiosity, empathy, order, and spontaneity), he pointed out that I probably wanted to be a “methodical planner” (aka a kayaker), but that this rarely worked out in real life.

Maybe twenty minutes into our trip, I observed that the heels of my sneakers were sitting in puddles of water, and that my socks were wet. Leaning forward to see if I could bail some of the water out, I realized it was coming in and out of the kayak through holes in the hull. I sang,


But unlike Liza and Henry, nobody demanded that the other “fix it.” Instead, we rested in the middle of the lake and admired the mountains. At this point we met up with the other canoe in our party and agreed to paddle to the bridge crossing the lake before turning around. Then I realized that the person at the front of the kayak sets the rhythm; unlike canoeing, steering in kayaking has a lot less to do with anything. An excellent reminder that it takes two to paddle both literally and metaphorically.

On the way back, it rained again, and I picked the wrong landmark to follow. When I realized my error, we redoubled our efforts to work together, so as to make it back to the marina before incurring a late charge. Not to mention that DH was wet, top and bottom, and my shorts were soaked through. (So much for picking the "dry" boat.) Plus, it was nearly lunchtime. Like the end date for each period of long-distance relationship in our 18 years together, we were glad to have a concrete goal in front of us, something on which to concentrate rather than the vast expanse of lake. By contrast, marriage seems open ended. With no particular goal in sight, maybe that permits us to try to get by on inertia. Hopefully chances to re-charge like this mini-vacation remind us to actively work on our relationship with each other, to set short-term goals, and always to be kind and flexible.

Back on shore, we changed into dry clothes and shared a burger and fries at the lakehouse before hopping in the car for the 1.5-hour return journey home. One of us even got a bit of a nap in. All in all, a worthwhile adventure. The best part was that we did it together.

*Officially named Lake Lynn after West Penn Power president Albert Lynn from 1925-1976, Cheat Lake got its moniker from the locals, either because of the surrounding "cheatgrass," because the treacherous river/lake "cheated" people out of their lives, or because they didn't like having the dammed lake named after a corporate bigwig.
Posted by Kristen Ann Ehrenberger at 3:48 PM