The Streets of Berlin


It wouldn’t be a summer weekend in Berlin without outdoor gatherings. This past Saturday was particularly busy. After grocery shopping and doing a load of laundry, I went to the library to finish up a microfiche project I had been working on. Here in Berlin I work mostly at the Staatsbibliothek Haus Unter den Linden, the older “house” of the state library located on the capital’s historic thoroughfare. When the weather is nice I will often take my lunch outside to eat it in front of the Humboldt Universität buildings next door. I watch the students and the tourists and the double-decker hop-on/hop-bus city-tour buses.

Yesterday I decided I needed a walk while eating my afternoon snack, so I grabbed my shades and set off down Unter den Linden. I walked east toward the Brandenburger Tor, about 4 blocks away, passing the Mercedes-Benz Gallerie and numerous souvenir shops. I had finished the really yummy cherry tart I had picked up at the Bäckerei that morning before I made it to the big sandstone gate (built 1788-1791), so I crossed the street to amble back to the library while eating my apple. On the other side of the street were 12-15 people demonstrating with signs and flags, asking for the United Nations to sanction Syria for its reprehensible and violent oppression of opponents to the regime (not to mention innocent refugees). The classmate who sat next to me in lecture my first year of medical school is from Syria, and she often posts on facebook about the political situation there. I told the demonstrators (mostly of Middle Eastern descent) that she and I were supportive and wished them much luck. I went back with my camera after the library had closed two hours later, but they were gone. 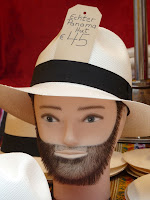 So I road home a slightly different route and was reminded by some banners that the FIFA Women’s Soccer World Championship began this weekend. It opened in Frankfurt am Main Friday night with a big riverside spectacle with singers and a laser light show. The teams are playing in nine cities around Germany, with the US women facing off against North Korea in Dresden on Tuesday. At least one of my roommates has a television, so I will try to watch the game. I don't think I'm up for watching the match alone in a pub, although I've done it before.

If I had reached the Brandenburg Gate, I might have noticed the enormous Christopher-Street-Day parade in the Tiergarden on the other side. As it was, I was headed for the Bergmanstraßenfest Kreuzberg jazzt! On account of working at the library, I had missed the American Gospel concert the church I'm attending here had hosted Saturday afternoon. But when I arrived in the early evening, the streets were still packed with vendors and people out to enjoy the four stages. I bought some sabzi for dinner and then wandered around. I was tempted by the colorful wrap-around skirts and beautiful beaded jewelry but kept my money in my pocket this time.

As I was headed home I came upon a trio of improv comedians on one of the stages and stopped to listen. They played the sorts of games I've heard in the States, getting suggestions from the audience, tagging in, and collecting sentences on pieces of paper. In one scene, they staged an "opera" about Curry 36, the famous Imbiss (quick snack shop) near my apartment; although it ended with the protagonist succumbing to "der Virus" [sic--EHEC is caused by the Salmonella bacterium], I may try to nab a currywurst there before I move. Below are photos I snapped of the guy in the vest promoting an open-air swinger club while the woman in the troupe stood behind him providing the gesticulations (and crotch readjustments). I also realize now that when they were discussing going to "the CSD" they weren't talking about the Christian Social Democrats but the gay parade! Even while understanding only 85-90% of what they were saying (or singing), I laughed so hard I got a headache and my cheeks hurt. Good times, Kreuzberg, good times! I'll miss you. 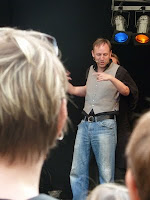 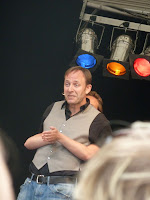 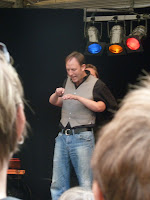