Berlin: a symphony of old and new

I’ve been in Berlin less than a week and so far my impression has been traffic, tourist spots, construction, and … marble. To begin with, Wednesday, on my way to drop off the rental car I used to drive me and my stuff from Leipzig, I made sure to go through Checkpoint Charlie (West to East, in case you're curious). To the left is the photo I snapped while at a red light on Friedrichstrasse just to the south. I visited the museum on an earlier trip to the capital, but they have since remodeled it.

Thursday was a holiday (Ascension Day), and since the libraries were closed, I went to a museum instead: the Pergamon. Once you get around the construction, the big draw there is the marble reliefs of the Gigantomachy (the battle between the giants and the gods) from a second-century temple in current-day Turkey (below, left). I spent most of my time looking at the special exhibit on the destroyed, discovered, and re-destroyed artwork from the Tell Halaf palace in present Syria (below, right). The exhibit gave extensive biographical details of Max von Oppenheim (1860-1946), the Jewish diplomat-turned-archeologist who financed the excavations and a private museum known for its curious human-animal statuary. Unfortunately, the statues were too large and the collection of small artifacts was too numerous to move either during World War II, and both suffered from Allied bombings in late 1944. After the war, the museum’s staff ended up on the wrong side of the Wall. Because the remains of the museum were “foreign property,” the DDR left them lying in a cellar for four decades. After reunification, a team tried to salvage what they could from the 27,000 fragments they spread out on wooden pallets in three warehouses. Amazingly, using photographs and trial-and-error, they were able to reconstruct 90% of the collection! On the right is Oppenheim's favorite piece, a female figure that once sat at the entrance to a tomb. He thought she had an other-worldly smile. 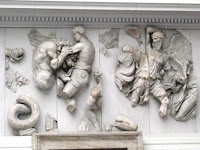 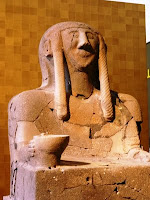 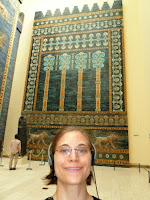 I was mostly tired out at this point, but I did walk through the other wing of the Pergamon long enough to get a photograph with part of the Ischar Gate and to note that the ancient Babylonians were very creative jewelry makers.

(To the right I am experimenting with the self-portrait function of my digital camera. The headphones are for the audio guide. I'm actually standing in front of a side panel of the gate, which is peaking into the frame in the upper left. These are enormous walls of colorful glazed bricks with animal motifs--but they're even smaller than the main gate, which was too large to reconstruct in the museum!)
Friday was my first work day, at the Staatsbibliothek Berlin (State Library). First I had to register with the local authorities; an hour and a half later, I headed to the building in Potsdamer Strasse (under construction). It turned out that I needed to be at the other building, in Unter den Linden, so on my way I rode my bicycle past the Holocaust Memorial and the Reichstag (the dome in the background, below left) and under the Brandenburg Gate (below right, seen from the east). The whole library building is a construction site but resolutely open for the users who can brave the tarps and the hallway that smells of urine! More on that in a future post. 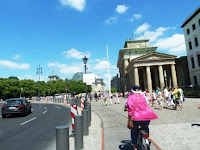 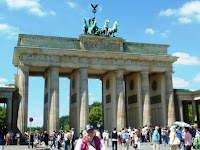 Because no books are delivered on Saturdays, I worked from home that day, and because the afternoon was warm and sunny, I decided to take a walk to/through one of the cemeteries in my neighborhood. Although there were some family members out tending to their plots, many of the graves are in disrepair. This is largely because when the Wall went up, it separated the cemetery from its parish, which could not maintain it. There are many interesting markers, such as the statue from the eighteenth century (below left), now protected by a canopy. The wall graves are often ornate hunks of marble, stone, or occasionally brick. The most unique tombstone I found is recent, from 2004: it consists of fist-sized marble balls, each painted with a number or letter, on metal rods, creating a bead effect. I also made the unexpected discovery of Felix Mendelssohn Bartholdy’s final resting place (below right); in Leipzig DH and I visited the house he died in. 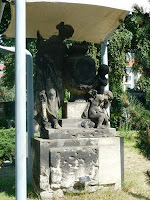 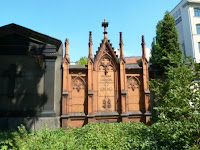 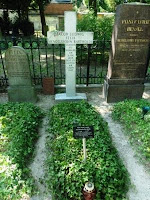 Sunday I went to church at the Passionskirche, a dying urban church that still uses a traditional, largely sung liturgy. The sanctuary was surprisingly different: instead of marble it is composed of brick and whitewash, with mosaic and painted-wood decorations. If I go back for a concert, I will post a photo.
Posted by Kristen Ann Ehrenberger at 2:29 AM