A window onto my world in Leipzig and Berlin

Editor's note: This post records some of the sights and sounds of my life in Germany. In Berlin I discovered a multicultural radio station broadcast just a block from my apartment in Kreuzberg. Right click on the link to open a little musical accompaniment! 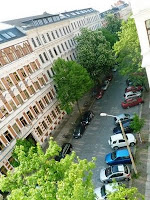 One of the things I will remember most about my apartment in Leipzig is the windows; I mentioned them in that post from Leipzig that published itself before I could add any pictures (or edit it! Click here for the cleaned-up version). I found the old wooden-framed ones in my bedroom quaint with their knobs (below left), and the newer ones in the bathroom (below center) and kitchen that you can either tilt or hinge open are stereotypically European in their functionality and simple design (Americans, think: IKEA). I was also tickled by the windows in the big double doors to the apartments, which opened inward behind a fancy metal grill (below right); this is how I paid my landlady early on a Saturday morning, while she was still in her bathrobe. 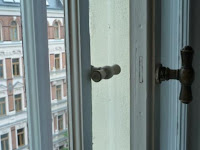 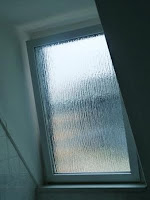 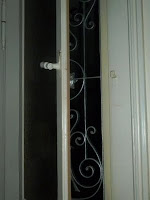 As I mentioned, my bedroom faced the street. I had no internet, no television, no radio—and on weekends no roommate, either. So I would listen to the “street radio.” At home we joke that our cat “watches tv” out the windows. In Leipzig the windows were my radio: while eating breakfast and fixing lunch in the morning, or while reading in the armchair on a Sunday afternoon, I listened to the cars driving over the cobblestones, the bikes rattling by, the sounds from the basketball court in the park, the clanking and rattling of the construction down the street, and the rain.

In Berlin my room again faces the street, but on the second floor instead of the fifth, and on a major east-west artery instead of an out-of-the-way T-intersection. Because there are no curtains, I have to dress in the bathroom. The other downside of these old windows is that they are binary: either open or closed. There is no "I would like a little fresh air while I sleep" setting. In Leipzig I was able to latch the panes to each other so the wind wouldn't blow them into each other, but I can't do that here. So I have to choose between traffic noise or getting baked by the morning sun. Mostly I leave a window open day and night. Immediately below me is a cafe, so as I sit at the desk the sound of utensils on plates and snatches of conversation waft up to me. Sometimes they even have live jazz music in the evening.

Because I am closer to the street, the windows are also *my* television. And yesterday, the street was overtaken by a parade as part of the Karneval der Kulturen. Organized every year since 1996 for Pentecost weekend (Pfingstwochende; Monday is a holiday here, too!), the KdK includes a street fair, dance parties, and a Carnival-style parade. In the old women's magazines I've been reading, Pfingsten was to Germans what Memorial Day is to Americans: a family holiday that marked the start of summer and vacation season. In the 1920s there were even Pentecost sales! Fewer Germans are religious anymore, but really, the KdK has nothing to do with tongues of flame or the Holy Spirit. Rather, it's an international festival that takes advantage of the holiday weekend.


Friday night and Saturday evening, after the library closed, I went to the Straßenfest, which happened to be just north of my apartment, on my route home. Sunday afternoon I also met up with a German graduate student and some of his friends to watch some of the parade. The Umzug began at 12:30pm, but the first float only reached my block at just before 3pm; the last one came by about 9:30pm. Of the nearly 100 groups participating, there was particularly strong representation from Latin American countries and clubs. The floats and costumes were some more, some less professional-looking. There were samba dancers, jugglers, guys on stilts. Probably the funniest moment was when a man wearing one of those costumes that sits on your shoulders--in the shape of an ugly magician with a tattered cloak--"charged" the children on the sidelines, to their horror and delight. Talk about sensory overload!


My first impression was the sheer number of people (1,5 million, according to the media). If you found a place to sit or stand, the people-watching was excellent: couples of various kinds, Teenies in pairs or small packs, fathers carrying children on their shoulders, mothers trying to maneuver strollers. All shapes and colors, every manner of hair style, lots of "ethnic" clothing, many different languages being spoken. But it was hard to go anywhere, especially since I was carrying a big backpack, and I worried about pickpockets. After a while even the most charitable of human beings could turn into a misanthrope, due to the overwhleming proximity of so many people. People bumping into you who are sweaty, and smoking, and drinking beers from around the world. 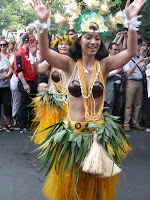 Of tastes there were many: I ate a Moroccan lamb-duck pita; a Bulgarian sausage; Ghanian vegetable-rice-and-beans; and one night, an American frozen yogurt cone, because it was being touted as something foreign, new, and "a real dairy product" (as opposed to something made from a powder, water, and air).


At the stands one could buy batik dresses, sombreros, jewelry, wooden figurines, absinth--even Berlin Underwear (local, handmade, one-of-a-kind underwear for 15 Euros = $21.50 each). About the only thing missing was knitted socks. I guess someone forgot to invite the German Omas. (Come to think of it, there weren't many in the crowds, either....)

Finally, the sounds: at the street fair there were several stages, but many of the stands played music too. Waiting in line at the Afro Küche (Afro Kitchen) Sunday we heard a Cuban trio playing dance music. Many of the floats either piped music or had small bands or were followed by drum corps. My last (and lasting) memory of the Karnival der Kulturen will probably be the thudding techno beat of the sidewalk party in front of my apartment building. The boom-a-boom-a-boom-a started coming through my window around noon, and I expected it would go on past midnight. As they say about my neighborhood, the nights are long in Kreuzberg. However, the party broke up about 10:30pm, and thereafter came the sounds of the clean-up: the engine of the occasional truck and the clink and clank of the empty glass bottles that enterprising individuals with those little shopping carts hadn't already collected for the Pfand (return money).


Last fall, German Chancellor Angela Merkel and the head of her party, Horst Seehofer (CSU), declared, "Multiculturalism is dead." It isn't enough to live side-by-side with one another, they said; we need to support common goals and principles (in German, Leitkultur). But the organizers of the Karnival der Kulturen beg to differ: Germany, and its capital city especially, are living examples of what's wonderful about recognizing our different cultures: the sights, the tastes, the sounds of diversity (spice of life, and all that). And after all, what says "Berlin" more than an enormous, international, outdoor party?
Posted by Kristen Ann Ehrenberger at 5:01 PM