Where I worked, Part I (Dresden) 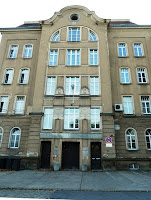 The next several posts are about where and how I worked in Germany. I spent my days in one of several libraries or archives, each with its own character. For the first seven months, most of my time was at the Dresden Hauptstaatsarchive (Main State Archive) in its temporary quarters on the grounds of the military barracks north of the city (photo left). There wasn't much to do or see in the area. The building used to house the state and university library, before that moved to the campus in the middle of town. At the beginning of June (after I had left Dresden), the archive closed and moved to its recently renovated house in the Regierungsviertel (Government Quarter) in the Neustadt, much closer to the center of town. It should open in the new/old location near the river next month. 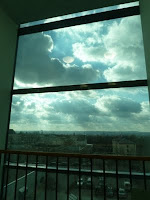 One tram stop to the north lies the small Stadtarchiv for Dresden. The reading room with its modern furniture lies on the fifth and top floor, with a large (shaded) skylight to let in the sunlight (indirectly). To the right is a view from the stairwell looking south, toward the river and the Neustadt. Train tracks ran right by the back of the building, so we could often hear trains and whistles while we read our old documents.
The Sächsische Landes- und Universitätsbibliothek (SLUB) occupies the ground floor and two underground levels on the campus of the Technische Universität Dresden, my host institution. Great earthen bunkers covered in grass and trees were erected around this university library, giving it a protected (defended?) feel. I snapped the shot below one evening when it had been raining. It seemed to me like the students’ umbrellas had cropped over their lockers like so many colorful mushrooms. I came here to look at microfilm of the local newspapers and to scan old books with the BookEyes (PDFs weigh a lot less than copies and are better for delicate books). 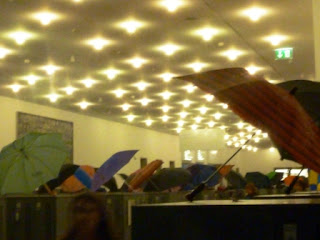 A couple of days I worked at the library of the German Hygiene Museum in Dresden. Although the building is mostly an aseptic white with dark floors, the library is much warmer, with lots of wood for the book shelves and desks. Unfortunately, that library closed without warning for renovations in February, and it did not reopen before I left the country. I hope that I was able to get what I needed last winter. 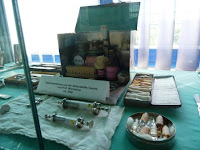 A last site in Dresden was the Institut für Geschichte der Medizin (Institute for the History of Medicine). They have a small library of books, some or which aren’t even in the online catalog with the rest of the university library's holdings. I photographed promotional materials for the Lahmanns Sanatorium-Bad Weiβer Hirsch in their conference room, which also contained several cases of old medical instruments, like the one in the photo to the left. The ladies here were extraordinarily friendly, and when they found out my last day with them happened to be my birthday, they bought ice cream cake and rote Grütze (red berries sauce) so we could celebrate!
Posted by Kristen Ann Ehrenberger at 10:13 PM