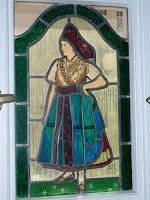 This is the second of two posts about the places at which I conducted my research while in Germany. Apologies for the delay in publication; teaching, reading my notes, and putting the finishing touches on a book manuscript have been taking up my time.

First: Saxony's second city. I went to Leipzig in order to work in the rich collection of the Deutsche Nationalbibliothek (Germany National Library). The two houses in Leipzig and Frankfurt am Main collect everything published in German since just before WWI. The big old building with beautiful mosaics in the lobby and pretty stained-glass windows in the cafeteria (left) dates from the same time, so many of the city tour buses pause in the circle drive for the tourists to snap a few photographs. When eating outside on the steps I often felt like part of the attraction. I liked working in the large main reading room, with its dark wood floor, walls, and desks. The desks each had a classic green-glass hooded lamp, which when glowing in the evenings lent the appropriate mood for doing research in early-twentieth-century ladies journals.


Speaking of mood, the characters of the two houses of the Staatsbibliothek in Berlin are very different. Haus 1 opened with great fanfare in early 1914, and its domed main reading room is supposed to have been quite an impressive sight. Unfortunately, the cuppola was damaged during WWII air raids, and it was finally dismantled in the 1970s. Haus 1 lies on the famous boulevard Unter den Linden, just a few blocks east of the Brandenburger Tor (Brandenburg Gate), and it ended up in East Berlin. There it suffered the architectural outrage (to read about it now) of having a couple of ugly book towers erected to hold the collections. The building is currently being cleaned and renovated inside and out, and a new glass cube main reading room will open early next year. On Die lange Nachte der Bibliotheken (Long night at the libraries) we were allowed a glimpsed at the as-yet unfinished reading room. Even though the entire place is essentially a construction site, I rather preferred the older style and even the noise to the visually interesting but strictly quiet Haus 2 on Potsdamer Platz. Plus, Haus 1 was closer once I moved to Prenzlauer Berg in July. With the division of the capital city, the library was also divided, and a newer, more modern building constructed in West Berlin in the 1960s contains the more recent collections. It is an architectural marvel of white and concrete and glass, of shapes and lights and uneven, open balconies. The open hours of Haus 2 were shorter than at Haus 1, so I was only here twice: once, to photograph a book that exists in single-copy in the Handwriting Collection; and once on Die lange Nacht der Bibliotheken to hear a radio drama set in a library. If you ever get lost in a library late at night--well, sometimes you don't want to be found...
The last place I worked in Berlin was at the Bundesfilmarchiv (Federal Film Archive) at Fehrbellinerplatz in Wilmersdorf. Part of the Platz is surrounded by the rounded “wings” of two Nazi-era buildings. From above I think they are supposed to be eagle-shaped. (The red structure in the photo to the left is the entrance to the U-Bahn.) I worked in the building across the street (right). Although the collection itself is impressive, I was underwhelmed my first day there. Visits are by appointment only and consist of you using the machines in an archivist’s office. However, this was helpful for me, since some of the 1920s hygiene films I looked at came in the mundane formats of VHS or DVD, but others were on film reels, and I had never worked with those before. I went back for a quick half day on my last day of research in Germany. I marked a few films for stills I want for an article I'm thinking of writing, and I watched a few more films. I was interested to note that both an advertisement for canned meat and a public health film on good diet used the idea of a fantasy land of too much food--they date from the post-WWI period, when Germans were finally able to buy and eat food after the long "hunger blockade" by the Allies. 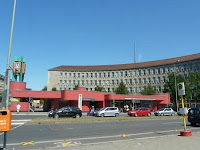 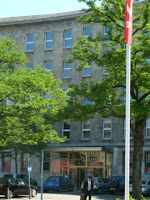 Posted by Kristen Ann Ehrenberger at 11:25 AM